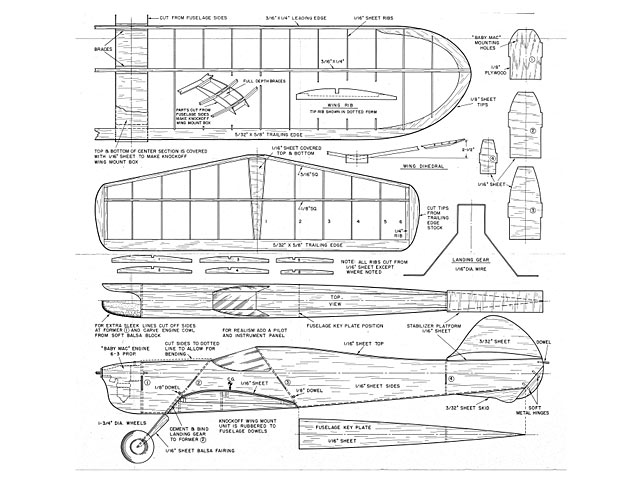 Quote: "Looks like a team racer, flies like a homesick angel. Building it is easy - in short, gentlemen, the ship's a Korker. By Ken WIllard and Keith Storey.

Quite a pair! Ken (left) is 39, a contract administrator for Lockheed Aircraft Serv in Burbank, Cal. Was 4 yrs with Air Force; during N Africa invasion flew with RAF in Hudsons out of Gibraltar making sea measurements to predict landing conditions for assault boats, hit 'em on the nose. Married, wife's name is Kathleen. Started flying in '27, holds commercial license, began modeling in '25. Keith is product designer and supervisor with Duro-Matic (McCoy engines), 25, served two years with AF. One of the originators of team racing and the FAST (first all-speed team) club. Designed the Key (oz1037) and Quest (oz9969) team racers, has officiated at past two Nats and Plymouth meets. Started modeling at 8; has held half-dozen national speed marks. Lives in Pasadena, California.

The Korker has the sleek and distinctive lines of the early sport and racing type aircraft. She has a fast climbing turn and a graceful glide. Take-offs are sure, quick, and clean. On calm days you will be able to land the model very near the launching point.

There are no tricky adjustments. You can make a left or tight turn under power with no fear of a spin-in. Glide may also be in either direction completely independent of power settings.

The original structure was flown several hundred times with no more damage than a few holes in the wing fabric, and that mostly due to our big thumbs. The features include a balsa box fuselage, keyed bulkheads and firewall, and knock-off wing and tail units. that really work.

Standard construction procedures are used. The wing and tail sections are built up over a full-size sketch or plan. Fuselage sides are single-piece balsa sheets held in line by keyed bulkheads. They curve in slightly at the top, giving additional strength. Top and bot-tom of the fuselage are sheet balsa.

The Korker is not limited to one engine or a single displacement. Early tests were made with the small .020 engines. As flying results proved successful, the sizes were increased to .035 and then .049.

All the engines used gave similar flights, with the larger ones showing their power through steeper and faster climb. During most of our test flights we held the engine run to about 15 to 20 seconds with a small tank and a limited fuel supply. Length of run for you will depend on the size of the flying field and the weather conditions.

The Korker normally has a flat slow glide. Add weight to the nose or tail as needed until you are satisfied. A sharp tendency to turn should be checked right away. It will probably turn out to be a slight warp in the wing. Holding the wing or tail over an electric plate or stove is an effective method of cor-recting a warp.

The engine thrust may be set to suit yourself. A straight setting of zero degrees left or right and up or down will prove successful. With this zero setting, the model will tend to turn to the left, and there may be a slight dip in the climb. If you want a perfect climbing turn in both directions, add about two degrees of right but no down thrust. Now Korker will go either way and practically have a contest climb to the right..." 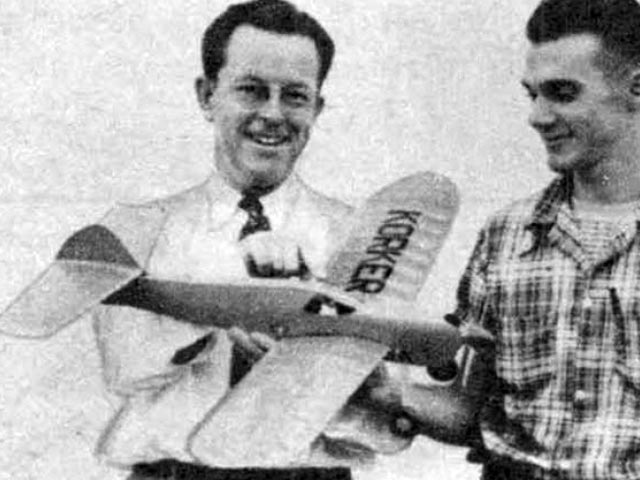