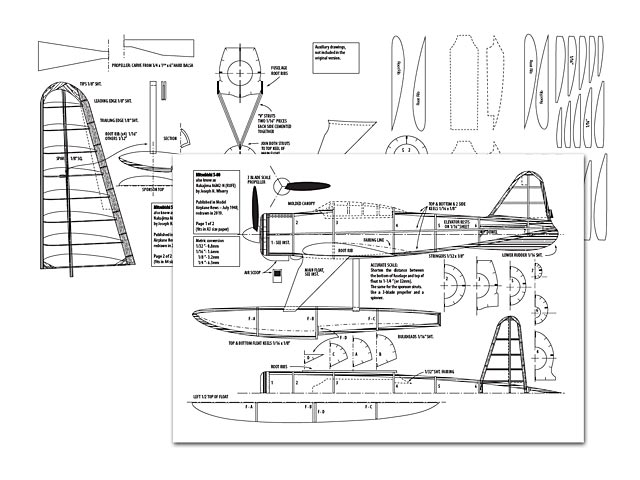 Quote: "In way of a modest contribution, I’m sending a vintage plan I fell upon many decades ago, and decided to redraw this year. Thank you, and greetings from Portugal. Merry Christmas!

Plan submission: Mitsubishi S-00 by Joseph H. Wherry. This plan was published in Model Airplane News in July 1948. At the very distant time I borrowed the magazine, Xeroxing was an expensive business, and its quality and durability was questionable. Manually tracing the plan was the solution, and saved the money for xeroxing the text pages, which more or less faded, but held the needed bulk of text for several decades.

Having found Outerzone and wishing to contribute, computer redrawing was the obvious choice in order to make justice to its quality standards and mend the awkward 3-page distribution of the magazine. The redrawing was made to fit in a A3 and a A4 page. The same PDF includes metric conversion and a few auxiliary drawings, not belonging to the original but may be found useful to fill a few intriguing gaps of information and help in building this lovely little model.

The instructions file is the text from the magazine along with redrawing notes at the end."

One of the very few expressly designed-for-the-purpose float fighters of World War II was this Japanese aircraft which made itself somewhat of a nuisance during the first two years of Pacific warfare. Its speed was not far from the 300 mph mark; maneuverability was excellent; and its 2 and usually 4 guns made it a menace during the days when island airstrips were rare. Those were the days when the Nips had things pretty much their own way: Allied fighter opposition was weak, and this seaplane made fighter plane logistics a fairly simple matter indeed.

This little model is exceptionally rugged, and in spite of a total of 4 coats of dope (2 clear and 2 coloured) it tips the scales ready to fly at a shade under 1 1/2 oz. (43g). Moment arm factors and the general layout of the big ship make changes unnecessary other than lengthening the prop and lowering the floats. The latter concession to accurate scale was deemed wise in order to employ a prop of sufficient length.

Right now the author desires to insert a 'note' to builders who may want to alter the accompanying design to accurate scale in all points. Only 3 alterations are necessary: (1) employ a spinner as shown on the plans (Sheet 1); (2) build a 3-blade scale propeller as indicated; (3) shorten the main float struts so that the top of the float is exactly 1 1/4” blow the bottom of the fuselage. Of course, shorten sponson struts, too.

If you have never tried a rubber powered scale model seaplane, by all means try this Mitsubishi fighter; flights are a thrill, and the extra work necessitated by the floats has been cut to a minimum through use of timesaving and weight-reducing float construction methods. The square tipped prop, now coming into vogue on full scale aircraft, was employed with excellent results, and this item is recommended as worthwhile. Such a prop provides powerful thrust even though is shorter than is usually required on such a model.

FUSELAGE: Top and bottom keel pieces of 1/16 x 1/8 balsa are pinned in place over the plans. Note that an addition to the top keel must be used in order to carry out the contour just aft the cockpit. Bulkheads 2 through 7 are cut (in halves) from 1/16 sheet. Cement left halves in place and add the side keel. Bulkhead 1 is cut from 1/8 sheet to the same pattern as No.2. After thoroughly dry, this half-fuselage is removed from workbench and the remaining half-bulkheads and the other side keel is cemented in place. All stringers are 1/32 x 1/8 stock. Cement these in place, using care on bottoms of Nos.3 and 4 bulkheads where the stringers form the base of the fairing that fillets into the wing root. The 2 root ribs (see side view, sheet 1) are now cut from 1/16 sheet and cemented in place. Cement the 2 small fairing pieces (see top view) of 1/32 sheet in place between wing roots and stringer.

Small bits of soft balsa scrap may be used to fair in the leading edge of the wing root. A small model-making blade is handy for carving these fairing pieces to correct shape after they are installed. Cement the elevator rests (1/16 x 1/8) in place along each side keel. Also the holder for rear motor hook dowel may be fitted, drilled, and the dowel may be put in position.

The fuselage is completed by building up the cowl front of 1/8 sheet half circles which have an inside diameter of 1-1/4 (32mm). An imitation crankcase is also built up of 1/8 sheet. Drill a 1/4 in diameter hole through the exact center of nose. Lower rudder, air scoops, etc, are left until later.

EMPENNAGE: You will have to trace the elevator shown, reverse tracing and re-trace; join the two plans (yours and the one shown on Sheet 1) and build directly over plan. Both rudder and elevators are built up of 1/16 flat balsa. Because lightness was a goal, a plain flat section was used.

MAIN FLOAT STRUTS: These members are of the utmost importance. Make a template out of cardboard of the large front main strut. Trace around your template so that you have one layer of 1/16 sheet with the grain horizontally for the center portion. Two outside layers are cut with a vertical grain. Cement these together, clamp, and allow to thoroughly dry. Then carve and sand strut to a streamline shape.

Note the dotted line which indicates the bottom of the bottom keel piece. The center lamination of the strut should be cut out along this line. Now the finished strut is cemented in place to the lower keel piece. The strut is cut in like manner with a notch at the bottom to allow for attachment to float. Also attach rear strut, taking care that both struts line up as shown in side view as well as vertically.

WINGS: Two of each rib pattern shown are cut from 1/16 sheet. Pin spar in place over plans and cement ribs in position. Note that the root rib is tilted toward the tip 3/32 to allow for a dihedral angle of 1 in beneath each tip. The leading and trailing edges are cemented in place and allowed to dry.

Carve and sand leading ande trailing edges to conform with the airfoil. Lastly, cement the small gussets in place at the root and go over all joints with an additional spot of cement. Give wings a final sanding.

SPONSON STRUTS: Build these 2 struts up with layers of 1/16 sheet. Note the small sectional view on Page 1. When finished, carve and sand to streamline cross-section and cement in lace at the designated spot on the bottom of the wing panel. They should fit nicely over the fourth rib from tip, and they must hang exactly vertical from both side and front view.

FLOATS: First we carve the tip floats, or sponsons, from firm but lightweight balsa. Split these down the center and hollow to a thickness of 3/32. Cement halves together again and give a thorough sanding. One coat of wood filler well rubbed in will form the base, with additional sanding, for a good color doping. These floats may now be firmly cemented to the tip float struts. Fair the point of attachment between struts and floats with cement.

Built up floats were at first used on the model illustrated. These, however, are a bit difficult to build. In addition, solid floats were found to be much stronger, better appearing, and no increase of weight is caused by the hollowed all-balsa floats.

The main float is built up in the same manner as was the fuselage except that no side keel pieces were used. The construction used, and much preferred by the writer, for such modern V-bottom floats omits the side keels. The float is very light and strong, and no difficulty should be encountered by any builder who has finished the conventionally constructed fuselage. Briefly, pin the top and bottom float keels in place and cement half-bulkheads in position. When dry, remove from bench and cement all remaining bulkhead halves in place. The 1/32 x1/8 stringers are next; ad 2 at a time using ones corresponding on each side. Do not fail to include the important bulkhead F-D as this member forms the step.

The float bottom is covered with 1/32 sheet balsa. Cut to outside shape with reference to the top view (page 1). You will be amazed at the sturdiness of such a light float construction. Do not dope the bottom of float yet..." 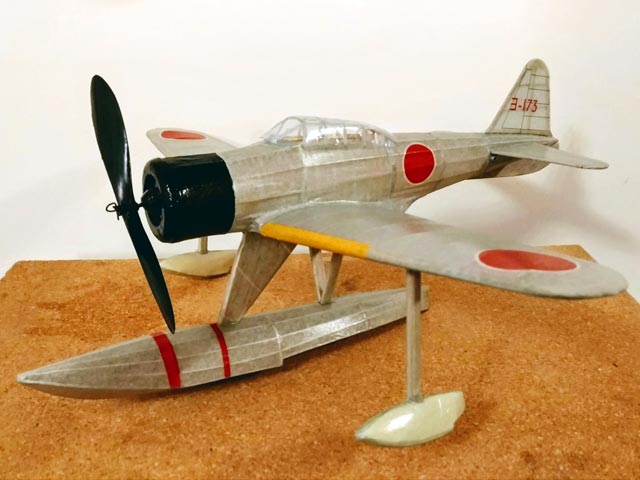 I think it important to note that the wartime designation "Mitsubishi S-00" was found to be inaccurate after the war. The aircraft was actually designated the Nakajima A6M2-N (Navy Type 2 Interceptor/Fighter-Bomber) and had the Allied code name "Rufe". Modelers seeking this plan might not find it if the Nakajima/Rufe designation were missing.
davidterrell80 - 30/12/2019
That's an interesting point. The short answer is yes, and I have just added that into the body text, thanks. The longer answer is that this is something I'm thinking on at the moment. We want people to be able to find all (scale) plans both ways - first through the original published title that appeared in print, and secondly through the scale 'type' name. It should be equally easy either way.
SteveWMD - 30/12/2019
I also include some photos of the newly built model (yes, 40 years later I built it again last month!), and photos of the original magazine, found on sale in Ebay [model photo & more pics 003-006].
AtilanoSuarez - 04/01/2020
Add a comment