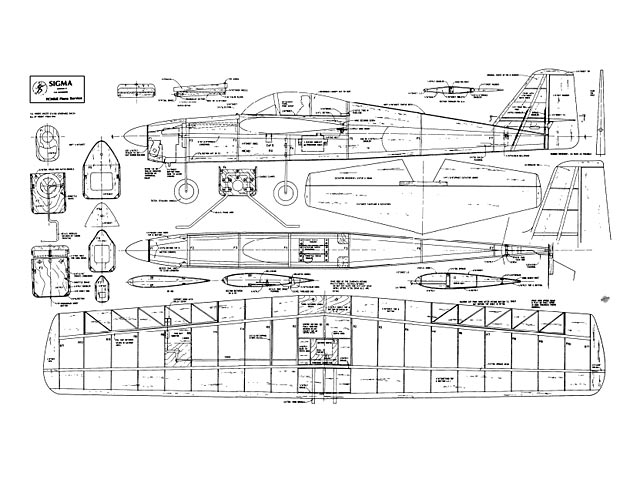 Sigma is the result of the desire to design a model that had a scale like appearance and a good sport aerobatic performance. I also wanted to move away from the traditional low wing format. This was for a number of reasons; first, the majority of models are of this format and although it offers a number of advantages I wanted to design and build something a little different. Secondly, going for a mid-wing layout the undercarriage could be permanently attached to the fuselage, therefore making the model easier to maintain. Lastly I just liked the idea of a mid wing model.

Building the wing: Start by making the two sets of ribs by the sandwich method. The sandwich is made up of one 1/8 root rib and the ten 1/16 ribs. The blanks should be fastened together by drilling a 1/8 hole through all the ribs and templates and fastening them together with two 6 BA nuts and bolts. At this stage only cut the main spar slots in the ribs; the trailing edge slots are cut in situ due to the angle of the trailing edge spars through the ribs. When the ribs are the correct shape mark a centre line along the leading edge for future reference. It is also a good idea to mark the top of each set of ribs relative to the templates. This is so that if there are slight differences in the symmetry of the templates both sets will be the same!

The wing panels are made separately and joined later. To help keep the ribs aligned thread 12 swg lengths of piano wire through the two holes already made. The ribs are then mounted on the bottom spar. Use another spar to support the trailing edges of the ribs and ensure that all the ribs are horizontal using the centre lines marked earlier. When all is square, cyano can be run into the joints. The top spar can now be fitted, again ensure all is square before gluing. The leading edge is fitted next, this is slotted for each rib and is best fixed using PVA. This is the last chance to make sure that the wing is warp free, so check the alignment of the ribs before leaving to dry.

The other wing panel can now be assembled. The two wing panels are joined together, with the ply bracing added after the glue has set by cutting appropriate slots in the centre section ribs. The ply will bend quite easily to take the slight
angle between the spars and leading edges. It is important at this stage to ensure that there are no incidence differences between the two panels.

On the prototype the aileron servo was fitted using a servo mounting clip supplied by the radio manufacturer. This is glued to a piece of 1/32 ply that is a snug fit in the servo bay so that the loading from the servo is dispersed. The aileron bellcranks are mounted on 1/16 ply. Care should be taken so that the bolt head does not protrude below the rib capping strip. Once the servo and bellcranks are in position the snakes can be fitted. A tip to ensure correct alignment is to draw a line across the top of the ribs between the servo output arm and the hole on the bellcrank. The distance from the top of the rib to the centre line of the bellcrank at the clevis position is then transferred to the plan. This is marked from the spar towards the trailing edge at the bellcrank position. Repeat this process for the servo. A line is drawn between these two points and where it crosses each rib it indicates the distance from the top of the rib to the position of the snake. Drill the ribs and fit the snakes.

To build the ailerons the tip riblets are added, these are copied from the ribs still attached to the wing. Then fit the front sheeting. This is initially one piece of balsa cut to the length of the aileron but about twice the depth of the ribs. Slots are cut in the rib positions and the sheet is glued in place with the correct angle set with a template. Once the glue is dry the excess balsa can be removed and the diagonal ribs fitted. Offer up the aileron to the wing and mark the position of the control horn, this can then be fitted with balsa surrounding it to hold it in place. Now fit the aileron top sheeting ensuring that the assembly is flat whilst the glue dries.

Onto the fuselage: Start by producing a kit of parts of the formers, sides and doublers. Glue the doublers to the sides taking care to produce a left and right side! Glue the spruce longerons to each side and then fit F2, F3 F4 and F5 to the right hand side. Note that F2 incorporates 1-1/2 degrees of downthrust. The other side can be fitted and when dry fit F6 and the tail posts. Make up the elevator bellcrank and pushrod and fit them to the rear of the fuselage. Take care that the bellcrank is square and moves freely. The rudder snake is then fitted..." 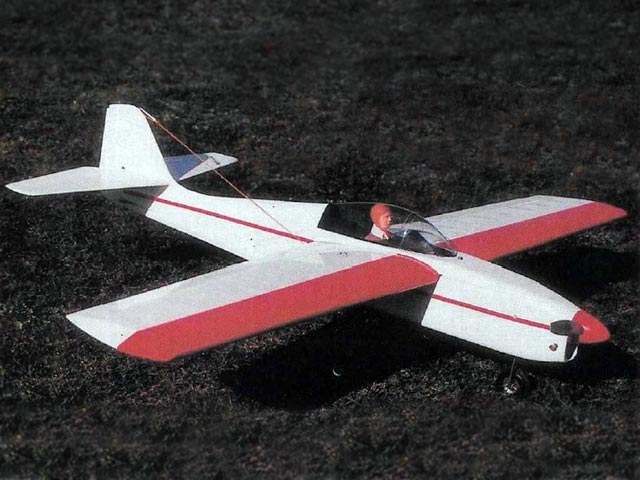