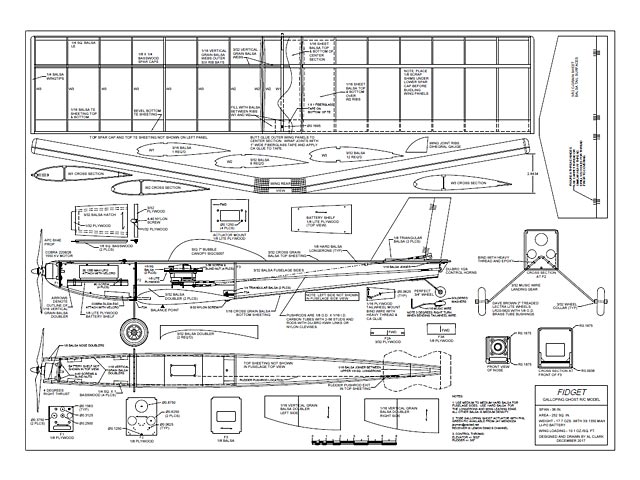 This plan is a free download available from the Model Aviation site at http://modelaviation.com/galloping-ghost-fidget where it appears along with full materials list, complete build text and some build pics. Also a free download of the plan in tiled format.

Quote: "The Fidget is a model specifically designed to fly using a Galloping Ghost RC system. Until now, if you wanted to fly a Galloping Ghost model, you had to either find plans or locate one of the kits that were produced in the 1960s and ’70s, such as the Midwest Lil’ Esquire and Lil’ Tri-Squire, Sterling Mini-Mambo, or Goldberg Junior Falcon and Junior Skylark. Not only are these old kits extremely hard to find, they command high prices.

Building a Fidget is considerably less expensive than buying an old, classic kit. It is easy to build, and the Fidget has other advantages as well. Older model designs were originally intended for single-channel, rudder-only control and were essentially Free Flight models with a movable rudder added. They typically featured flat-bottomed airfoil sections and positive incidence was added to the wing. This resulted in a couple of drawbacks when a Galloping Ghost radio, which added elevator and throttle control, was used. These models could only be trimmed for one airspeed, and when the speed increased, the model tended to balloon or nose up into a climb.

With the flat-bottomed airfoil section and positive wing incidence, it was necessary to add down-elevator to prevent the model from climbing in level flight. The Fidget eliminates these issues by using a semisymmetrical airfoil section, 0° wing incidence, and a low-wing configuration. The Fidget does not balloon with airspeed increases, and no motor down-thrust or down-elevator trim is needed. This makes the Fidget easier and more pleasant to fly compared with other older classic designs.

The Fidget uses a Cobra 2208/26 1,550 Kv motor, Cobra DL22A ESC, and an APC 6 × 4E propeller powered by a 3S 1,350 LiPo battery. This well-matched power system provides a little power margin when needed, as well as decent flight duration. The battery is easily accessible from a hatch on top of the fuselage, and the wing can be removed with a single nylon screw.

The Fidget radio system consists of a Tobe Kallner Galloping Ghost actuator with a Phil Green Peripheral Interface Controller (PIC) added, and a Lemon DSM2 six-channel receiver. For the transmitter, I am using a rare, 1975 vintage Orbit three-channel unit that was converted to 2.4 GHz.

Galloping Ghost has been around in many forms and names for decades. In the 1950s, it was originally called Two-Tone Pulse Width (TTPW). Later refinements were dubbed Kicking Duck, Mickey Mouse, Simple-Simul, Simple Proportional, Pulse, and Galloping Ghost. The gallop and kick names come from the fact that the airplane’s tail pulses up and down as it responds to the elevator flapping up and down.

The rudder and elevator both flap, but they flap equally in each direction at neutral, so the airplane flies straight. The controls would flap approximately four to six times per second at neutral. When you moved the control stick, the corresponding control surface would begin to flap more to one side than the other, causing the airplane to react accordingly. The advantage of this crude system was that it offered proportional control and trim using a single-channel radio..."

Note for some video of Al Clark flying his own prototype Fidget model, see https://www.youtube.com/watch?v=HbdFTqDVFII

Note a laser cut kit is available from http://manzanolaser.com/Fidget--Sport-Model-Airplane-for-3-Channel-or-Galloping-Ghost-RC-Systems_p_3421.html 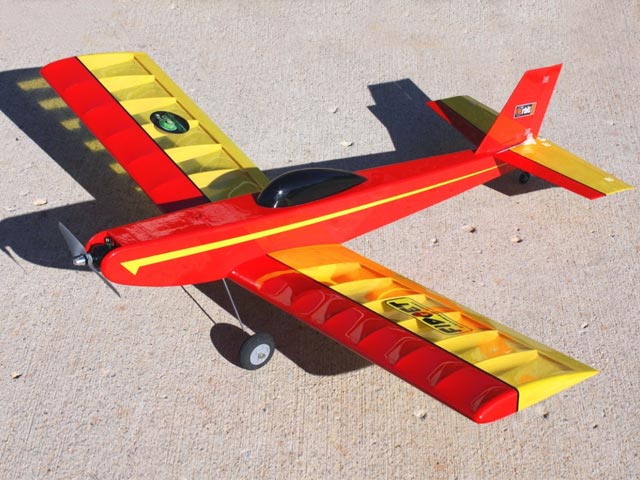