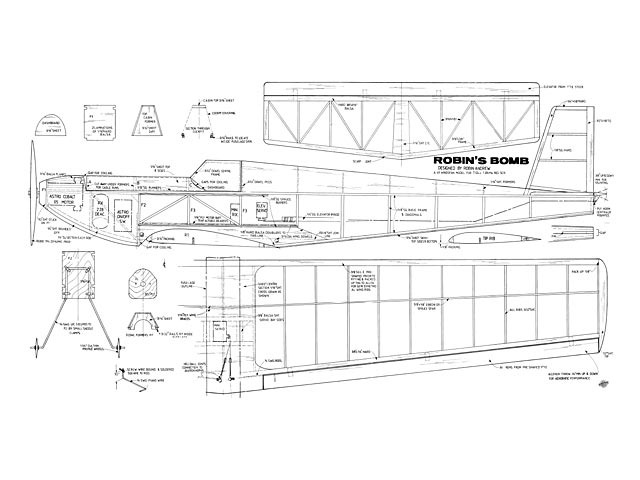 Quote: "Robin's Bomb: Robin Andrew's 49 in electric stunter inspired by a 1940's control liner called 'Mills Bomb' (sadly not the same as the Mills Bomb on OZ). From May 1990 Radio Modeller, it is unusual for a British design in that it specifies one of the expensive Astro motors. As I look at this plan I have the distinct feeling it would both look and fly better with more fin area, perhaps through the simple addition of a rudder. I've edited the plan slightly to join the model's nose on to the rest of it!"

I was quite happy flying my electric 'Astro Challenger' but found it didn't much like strong winds and wouldn't stunt. While looking through some old 1949 model magazines I came upon an advertisement and picture of a 'Mills Bomb' for control-line. Sadly, there was no hope of getting a plan so I calculated the span I needed for a hot electric stunt model, about 48 in or so, drew up a similar looking layout and called it 'Robin's Bomb!'

All you need is three-channel radio, a good 05 motor and the battery compartment is long enough to take 7 cells of 1200 mA size. The flying controls are aileron and elevator and, because it's a stunter, the wing has no dihedral. Here's how to build one.

Fuselage construction: Choose stiff lightweight, hard-textured wood for the 1/16 sheet sides and longerons. Cut the sides to shape and pin one down on the building board. Add the top and bottom plus the obeche strips. Remember to keep the top longeron from nose to cabin 3/32 in below the top edge, as this serves to locate the top hatch.

Build up the spacer and uprights and wait until dry. Make another opposite handed side in the same way. Cut out the ply formers and make up the rear battery stop laminated former F3. Glue in F2 and F3 making sure they are upright when fitted to the fuselage side.

Use extra 3/32 sq pieces to lock the formers in place. When dry add the other side on top of the formers and leave to dry. Stand the assembly upright on the building board and pin down at the formers. Pull in at the tail leaving 1/2 in gap between stern posts. Fill in along the top with cross-pieces and then add top formers.

When dry, turn the assembly on its side and fill in the bottom cross pieces and then the bottom sheeting. Continue by adding the top 1/16 slanting decking leaving the flat top piece until later. When dry, pull in the nose and glue on the front ply former F1.

Add 3/32 sheet doublers behind F1 on the inside of the nose. Now add nose bottom curved rails. When dry, turn the fuselage upside down and glue on the nose under sheeting using the grain cross-wise to help the curve. Make holes for the wing 3/16 dowels and glue them in place. Turn the fuselage upright and lay in the 1/16 ply battery support cross-pieces to save weight. These go from behind F2 along to F3.

Tail feathers: Time now to build the tailplane and fin using hard balsa. When compkted, place the tailplane in position on the fuselage and check for square before gluing. Add the fin with a glue fillet along its join. Lastly, glue in place the rear fuselage top decking, fairing in the fin and tail to the stern post. Sand and cover the fuselage with lightweight tissue doped on for strength and lightness.

Now F1 can be drilled for motor fitting. The elevator servo can be fitted in 3/8 sheet bearers form underneath near the wing trailing edge. Make a push rod from hard 1/4 in balsa with a 16 swg hook at the rear which connects to a 1/16 ply horn in the strip elevator. Cover the tailplane and fin in Solartex and then pierce the tailplane edge for elevator hinges, I use 1/4 in wide thin Mylar and cyano them in place. Offer up the covered elevator and check for up and down movement and correct neutral with neutral Tx trim.

Now it's time to construct the top cover and cabin. This is done by first laying in the 3/32 in sq top strips on top of the fuselage longerons and then adding top formers. Finally, cover this by adding slanting sides and then the fiat top. Lastly, cover this in tissue; I covered the cockpit in white Solartex. Note that there should be air gaps around the dashboard for cooling, Now fit the short 14swg undercart and lightweight narmw wheels by cutting a slot through the bottom of the 1/4 sheet nose. Hold thy; undercarriage in place with thread through holes in F.

Radio installation: I used Century Systems mini Rx and micro servos but there is room for larger equipment to be fitted even if the Tx has to go in the same space alongside the elevator servo. This keeps the Rx aerial away from the Astro cobalt motor in case of electrical noise break-through.

I use the 35 amp largest spade connectors which are used on a]ternators in. cars as they are low loss and easier to pull apart in cold conditions. Don't forget to add a fuse - I chose the car green 'U' type 30 amp and connected it by smaller spade connectors. After all the wiring is connected and the Astro on-off throttle is in circuit a motor run test can be done. Always make sure that there is no sparking at any of the soldered joints as this will blot out the radio reception.

The last thing is to complete the short top cowl over the motor and add front 1/2 in sheet to F1 and fair it in. I fitted a Dynamic 7 x 4 prop as it seems to give 10% more power. My battery is 7 cells using TV co-ax braid as connecting strip, 6 in a row covered in insulating material and then the 7th cell squashed in at the front..." 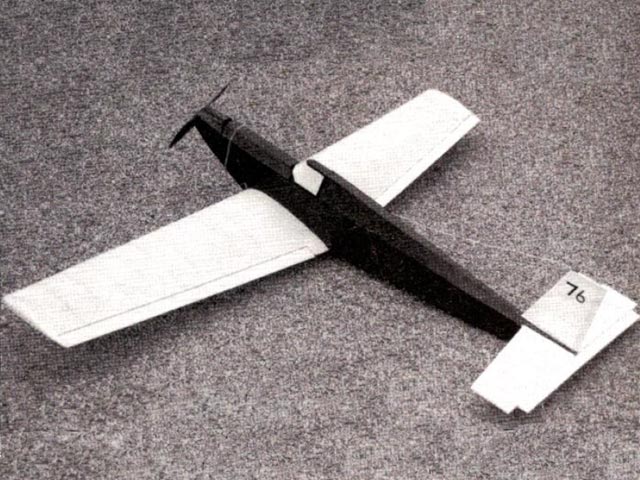