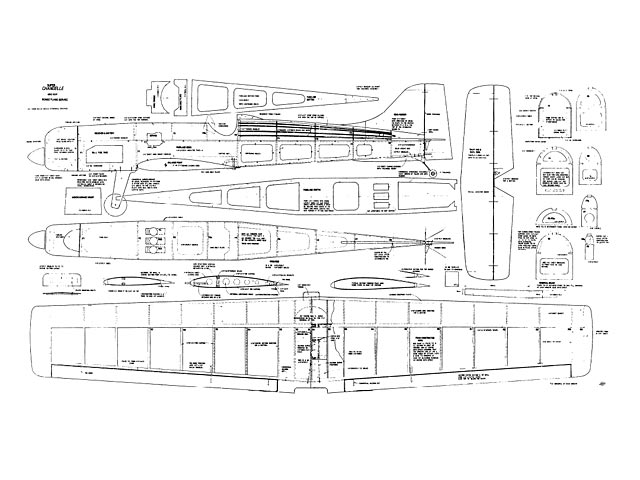 The original intention in building this model stemmed from the need to have a-flying test bed to sort out some wrinkles in a particularly difficult .48 four stroke engine that hadn't run properly in a previous model and was intended for something more grand. Now I know that some .48s play up when new and require a bit of mothering until properly run in or maybe understood), so to overcome those tedious early days, a model was needed that had 'engine kindness' built-in. You know the sort of thing - engine upright, plumbing perfectly aligned, adequate cooling, easy access to the twiddly bits, etc. A simple plank and box model would probably have done the job, but I do have some Club 'Cred' to keep up!

What I wanted was a good looking low-winged model, with generous aerobatic potential, around 6 feet span, a longish tail moment to give a smooth flight performance and a tapered semi-symmetrical sectioned wing, loaded to about 18 to 20 oz/sq ft for good 'dead stick' landings - just in case I hadn't designed out the previous engine problems!

What are you up to now?, said the wife from the tele corner. Oh just designing a quick model - should have it finished by the weekend, I said - but she's seen it all before and you could see her thinking: Here comes another 3 months of solid concentration, silence and balsa dust! Well, she's right, really. I start out with good intentions of building something quick and dirty, then muck about for ages tarting it up. The end product, however, looks pretty and flies great, so I reckon the extra work is justified.

After a few evenings of drawing and rubbing out (quite a lot of the latter), Super Chandelle was born. The Name? Ah, yes! You'll know that kit man, Howard Metcalfe, sells a quick-to-build ABS aerobatic model with a similar name! I built one some time ago and it flew a real treat, until it came to a premature and terminal end when it aimed itself unceremoniously at the only metal farm gate for miles around! The memory of its smoothness in the air, and similar performance, led me to name my 'Super' model after it. Hopefully Howard will consider this a compliment to the skill of his design, rather than outright plagiarism by me!

The notes that follow are rather more detailed than is usual to help the less experienced modeller get to grips with what could be their first plan built aerobatic aircraft.

Wings and things: Nothing at all unusual about the construction of either foam or built-up types. The chosen wing section is a modified version of the popular NACA 2412, which will give lift when wanted, especially for those dreaded 'dead stick landings' - I was still worried about that engine you see! Those who want more perfect aerobatics might consider an alternative symmetrical section by making the shape below the rib datum the same as that above, adjusting the woodwork accordingly. But for those of us who just sigh for good flight performance and a forgiving nature, leave well alone and stick with the plan! Washout of 1-1/2° is built into the wing to aid those using this design as an introduction to low wing aerobatic flying. This helps to avoid the tip-stalling problems usually associated with tapered wings, as will the inboard ailerons.

Foam wings are generally quicker to build, so let's start with thern. The two blanks will arrive without leading or false trailing edges, so using 1/2 x 1 in for the former and 1/4 x 1/2 in for the latter, white glue these in place. When dry, shape with razor plane and a long sanding block to the sections shown. Prepare the 1/2 x 1-1/2 in trailing edges at the centre section to accept the aileron torque rods.

Using the whole length of the trailing edge, epoxy the tip and centre sections to the false trailing edge, making sure that the torque rods are protected so they don't bind. Don't glue the aileron section! Hold the TE in place whilst the glue is drying with masking tape, making sure that the correct section is maintained. When dry, carefully cut away the ailerons and clean up any ragged edges, leaving a gap at either end so the covering material will not bind when assembled. Next shape the aileron leading edges, then temporarily fit them with your choice of hinges so that any final adjustments can be made to the aerofoil shape.

Use a long sanding block to sand both centre sections to give the required 1-1/2 in tip dihedral. The angle template on the plan will help here. That done? Good, on with the joining. Firstly check that both wing tips have the same angle of attack (minus 1.5'). Make any adjustments at the centre section, otherwise the model will be the very devil to trim! Using quick setting epoxy, join the wing panels together, propping one tip up by 3 in. A good way to hold the horizontal panel flat to the building board is to weigh it down with a copy of Yellow Pages or similar. This follows the shape of the top of the wing and imparts an even pressure.

When dry, use a razor saw, or preferably a hacksaw blade ground to a fine point, to cut through the centre of the leading edge, then enlarge the slot to accommodate the 1/8" birch ply wing tongue shown on the built up drawing. Make sure that the slot is exactly on the leading edge centre line. A generous dollop of epoxy sets the tongue into the wing. After cutting away the trailing edge for the wing mounting plate, the centre section can be strengthened with the usual epoxy and bandage treatment..." 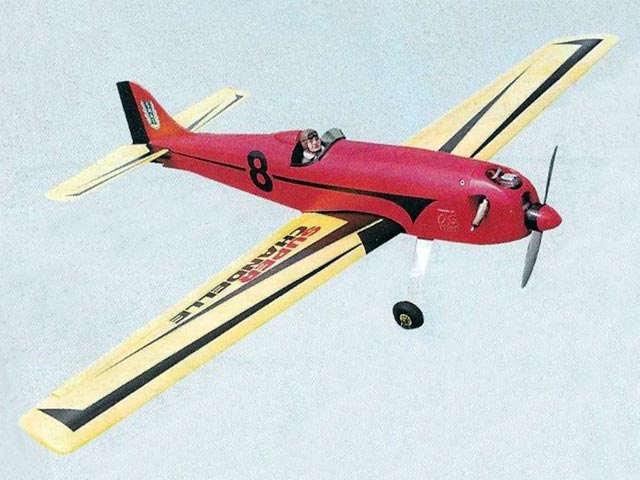