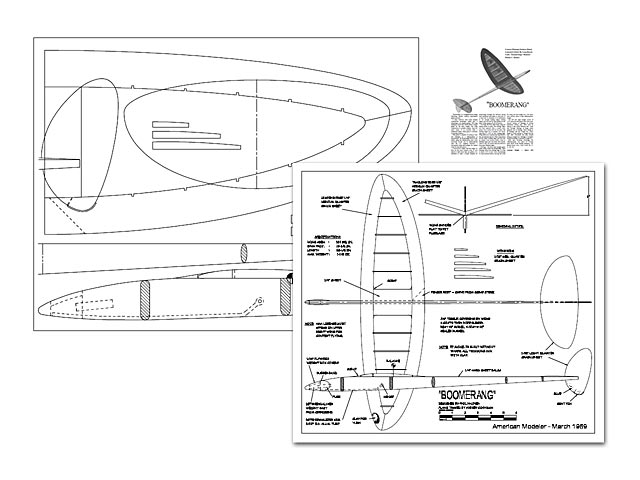 Quote: "Boomerang is a straightforward design following modern outdoor hand-launch glider practices. It does, however, have some unusual construction techniques, which give it advantages over regular gliders. The wing loading is much less, which allows a larger glider for the same weight. The wing construction is actually simpler than the solid types; it is covered with a translucent tissue, which gives it visibility at a greater distance.

This glider is capable of soaring at very low altitudes, so a dethermalizer is incorporated. All Boomerangs flown by the author using this dethermalizer have been recovered except one - it dethermalized onto the Los Angeles Freeway! I recommend using three gliders for contest work for just this reason.

Construction: Begin with the wings, as they are the most complex item. If you intend to build more than one glider, it is advisable to make a simple template by pinpricking through the full-size layout onto cardboard, hard balsa, or plywood. If a band saw is available, it is worthwhile to cut enough leading edges, trailing edges, and root ribs for three gliders at one time. In this manner all will be similar.

Cut wing ribs from sheet balsa, using rib shapes shown on plan. The trailing edges are best tapered with a small razor plane, but a knife will do the trick. The trailing edges are a constant 1/8 thick, tapering to 1/64 at the trailing edge. Wing halves are cemented and assembled in the conventional manner. When wing halves are dry, shape leading edges and root ribs as typical cross section shows. Sand in dihedral angle and coat joints with cement. Allow to dry. Re-cement and join halves at the proper dihedral angle.

Fuselage: Cut from hard straight grain balsa, using a knife and straightedge. Taper fuselage sides from trailing edge of wing to about 1/16 in at rear. Carve the fuselage to cross-sections shown, leaving flat areas for wing, tail and weight box. Cut lower nose section away to take dethermalizer weight.

Cut left and right weight covers of 1/16 plywood and attach with white glue. Groove bottom of fuselage to accept aluminum tubing arm. Drill hole in tubing to take small flathead nail. Push nail through fuselage at hinge point; assemble arm to fuselage. Bend tubing to fit fuselage and into weight box. Don't forget to crimp tubing so weight will not slip. Melt Cerrobend and pour around tubing in weight box. Fuselage is complete except for fairing of nose and final sanding. Sand sides of weight until weight drops free of weight box easily.

Tail surfaces: The horizontal and vertical stabilizers are cut from light quarter- grain sheet balsa, and then sanded to streamline shape as shown. Do not sand trailing edges too thin or they will warp when sealed.

Final assembly: Check fuselage with straightedge to make sure wing and tail platforms are in the same plane. If they have warped, sand them back into plane. Sand a 1/4 in wide 'flat' on bottom of wing at dihedral break with a sanding block. Rub a coat of cement into joint and allow to dry. Apply second coat of cement and assemble wing to fuselage. Horizontal stabilizer is assembled in the same manner.

Cut section for vertical until it fits snugly around horizontal and fuselage. Insert U-shaped headless common pin in bottom of fin for tailskid. Rub in some cement for strength and assemble to fuselage. Use no offset.

Make a finger launching pad from scrap fuselage stock, and sand to streamline shape. Cement to wing and fuselage. Rub a fillet coat of cement on all joints and your model (s) is/are ready for covering.

Wings are covered with colored Jap tissue. Let tissue lap down over the fuselage on the bottom for added strength. Medium thick clear dope makes a good adhesive. Water-shrink the tissue and apply thin coat of dope. AMA license numbers are required for contest flying; these can be cut from black tissue and applied with thin dope.

Give wings four more coats of thin dope, sanding lightly between, with No. 500 sand paper.

Fuselage and tail surfaces are finished with 3 or 4 coats of sanding sealer, or until they are moisture-resistant.

Balancing and flying: Balance by sanding bottom of weight until model balances 2 1/2 inches back of leading edge at root.

Test glider over grassy area. Sand off weight or add clay until flat glide is ob - tained. Turn models in 35 to 50 foot circles to the left, by adding clay to the left wing tip. Do not use rudder. This trim is for right-handed flyers, left-handed flyers turn opposite.

Now you are ready for the big moment. Get a good grip on the fuselage and launching pad and throw up and out to the right, as you would a baseball. Model should go up to the right, in a half circle and roll out smoothly into a left gliding turn.

Hey! Did you light the fuse? I think you are in one! Incidentally, long slim penny balloons cut into 1/4 in wide strips make fine bands for holding fuse and weight." 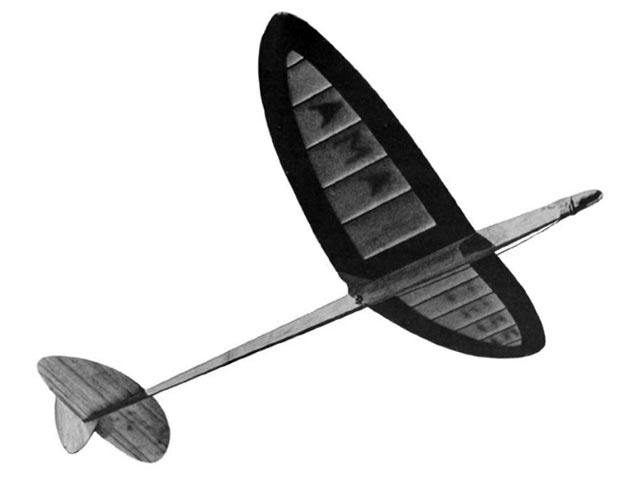