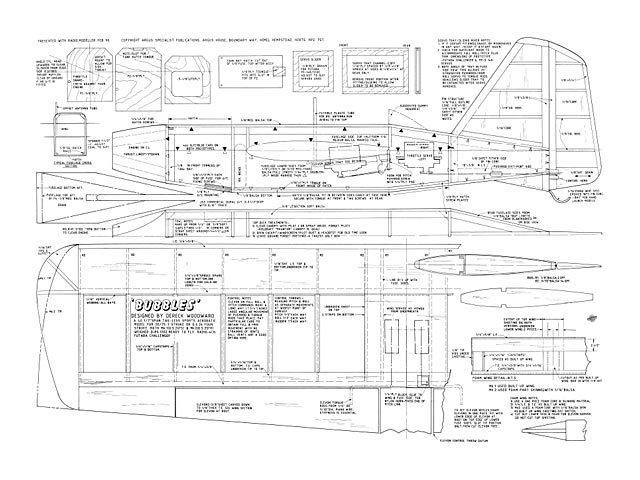 Quote: "Bubbles. Dereck Woodward goes wide-eyed and tailless with this 40 in sportster.

I can tell when inspiration is striking. Being an inveterate doodler means projects are detectable well before they leap from imagination to reality. So when tailplanes went missing on the sketchpads - something was afoot, so let's give it a hand (groan)!

Commonsense shelved the scale tailless while experience was gained. So, exhume 'Little Special's remain from the attic of remembrance and salvage the wing - intact after the crash. Let's hear a cheer for light wooden structures.

For days I slaved late into early evening. The design centred on a sliding servo tray inside a box with a fin on the back. Messrs Simmonds and Whitehead helped place the CG, empirical design the elevon area, engine the nose length. Styling added a canopy, a handy undercarriage won a bit-part keeping the prop out of the dirt. For once I made the parts before building, so the plan related to the model. Covering involved an unusual holiday souvenir - a roll of Annerican covering film. If a tailless doesn't grab interest - a pink one will!

To the field: A checkout proves it works so off to the field on the nicest day for a while. Unlike many, forced into test flying, I find the urge to fly irresistible, So start up, out on the strip and open up - she rotates smartly onto the prop! Perhaps Dereck's universal u/c position isn't really. Restart, brief 'volunteer' for hand launch - at least Dave knows it'll go away from him - a mighty good heave and she's away. The laws of flight decide I'm not guilty and 'Bubbles' climbs out as though she's home.

She needed more 'up', inverted needs down stick - I just accept it. Hey guys - I guessed right! It wasn't all roses, ground handling was nil until I moved the u/c forward. The flight envelope expanded to spins, snaps, four point rolls and outside loops. The message was clear - she can do anything the big guys can, except quietly. Then the fairy tale ended. One night, when the sight of 'Bubbles' was becoming accepted, the pitch drive came off. Scratch Mark One!

There's no keeping a good 'un down so we cut some cores and built another. So, you want to go with a foam wing - no problems. If you prefer a real structure, the photos show that it was built, not just drawn in the vague hope it might work.

If you fancy breaking out of the mould, your question must be - can I handle one? The first element is your plans building ability. The servo tray must be accurate to avoid friction but there's little else to fret over. As for flying, 'Bubbles' is little different to any fast, fairly neutral model- A question I've been asked a number of times is about orientation. Having flown a delta before, I can guess what's on folks' minds, but 'Bubbles' gives the same visual cues as a conventional model. The planform on a knife edged pass is something else though!

So, you want to go 'tailless'? Be radical - read the instructions! 'Bubbles' is easy to build (there's little to it!), but rather than where you build a wing, a tail, a body then fit radio, this one is built in one piece, so all the parts are intertwined. So read through my hints and sort out progress in your mind first - if you're contemplating this one I figure you only need the oddities pointing out anyway.

Let's go! Have to start with the wing. Built-up first, no problems. Cut out the ribs with the aid of a ply template. The cunning lack of dihedral added to the 36 in mainspars means you only build one panel. The trailing edge is designed to add to the strength of the wing. so don't go simplifying it and the leading edge is a good old fashioned 'D' box..." 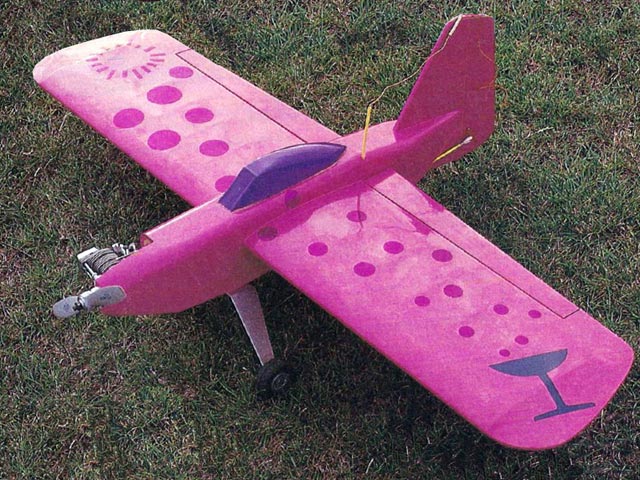 Can any one point the cg
akram - 22/12/2019
Same as Little Tiny Bigga Bit I suppose.
Hubert - 23/12/2019
The Bigga Bit seems to use a different, fatter airfoil, so not sure about comparing that to this. But if you superimpose the drawings from the two smaller models onto this one, and then scale them up to match, they both give you the answer that of CG should be (probably) around 39 mm back from the wing LE. I'd be tempted to start a little bit more forward, at first.
SteveWMD - 23/12/2019
As both use a symmetrical section (with a little reflex applied by the elevon) then the cg of the bigga bit should be ok. If in doubt go for a forward cg (say 10% of root chord) and work back- in very small increments.
M Hodgson - 23/12/2019
To obtain a stability coefficient of 10%, CG should be at 37 mm of leading edge. 10% is quite high, don't move the CG further. Add also a little bit of up on the elevons. After the first flights, you can advance by small increments the CG
Victor - 24/12/2019
Add a comment