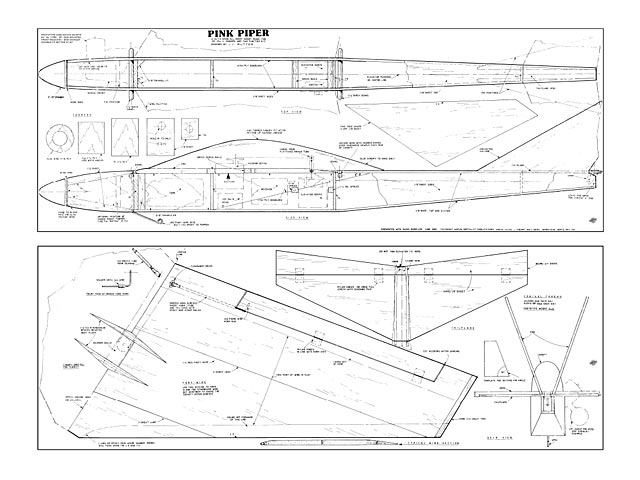 Quote: "Hi Mary, Attached plans and article are for another of John Rutter's 'all sheet' designs, 'Pink Piper'. The plan was published in Radio Modeller June 1989 as a 34 1/2 inch span sport model for 0.09 to 0.15 engines. Hope it's of interest to OZ. Best wishes,"

Despite resembling a miniature 'Mirus', this little model is an original design derived from a less successful canard design. The fuselage of that design was not much use, but the wing was perfect once the tip fins had been removed and put on the back of the new model. (Waste not want not!) In other words, the model is a 'bitsa' that happens to go much better than its parent model.

The canard was powered very adequately by a PAW 1.49 so I fitted a piped MVVS GR 2.49 to make things even more interesting! Two-channel gear (aileron/elevator) meant no throttle but the tank only gives about 8 minutes flying time and the glide is very good as the model only weights about 24 oz. This also means that the vertical performance leaves nothing to be desired either. Even allowing for the ready-made wing and fin, the construction of the model was very quick and easy and should take up very few hours of spare time (non-flying time).

Down to building: I started construction with the wing (alright, so I already had the wing but I had to make it for the canard in the first place, which is simply cut from about three sheets of 1/4 in balsa. It doesn't have to be rock hard but springy is better than spongy. I read somewhere that someone had made a wing for one of my designs from 1/4 in ply and was surprised to find that the model was twice the weight of the original. Overkill!

Even as overpowered as my models usually are, the wings quite happily take full up at full throttle, I've yet to snap one in the air. Once the wing halves are butt jointed together (epoxy) the pine/ply servo bearers are epoxied in place and the hole cut out for the servo. I used a piece of very lightweight glass cloth (1/2 oz/sq yd) to reinforce the join: thicker simply is not needed if the joint is anything like good in the first place. Ailerons are centre hinged with mylar and 14 gauge torque rods in tube do the moving. The whole wing is covered, like the rest of the model, in Solarfilm.

The back end: The tail and fins are given similar treatment to the wing but this time I used pretty hard stock to keep the CG well back. The wing sweep means that the CG is a lot further back than you might think. I must have got the weight about right as the model needed no ballast at all. Don't forget to angle the base of the fins to give a handed pair, cover the pieces and put to one side.

Fuselage: As I stated in the introduction to the article, my model used an MVVS GR 2.5 cc motor. This is a rear intake, rear exhaust, racing style motor and the fuselage was made as narrow as possible in order to fit an ED Nol tuned pipe behind it. I wanted to use a 4 oz SLEC tank but I couldn't use this and the pipe as it would have made the fuselage too wide. If you are using a more sensible motor, you might want to mount it at 45° to keep the exhaust off the ground and make the formers that bit wider to take the 4 oz tank. After cutting the parts out I reinforced the sides with 1/64 ply (thicker is not needed but might be cheaper) and stuck the formers in place on one side. The other side is added and when set the tail is drawn together and the final former stuck in place. Gluing the formers with cyan makes this a very quick process.

Now is the time to fit the elevator servo and its rails so that the pushrod can be made up to length, elevator temporarily in place. Check at the same time that the wing and elevator are parallel to each other and at right angles to the fuselage sides. At the other end fit the motor mount, pull the nose in a bit, I used a 'G' cramp, and fit the top and bottom blocks. Glue the top and bottom sheeting in place, grain lengthways, and, when set, round the corners off a bit. Make a cut-out for the motor, fit the spinner and round off the front blocks to suit. Remove the motor, sand the front nice and flat and fit the ply nose ring..." 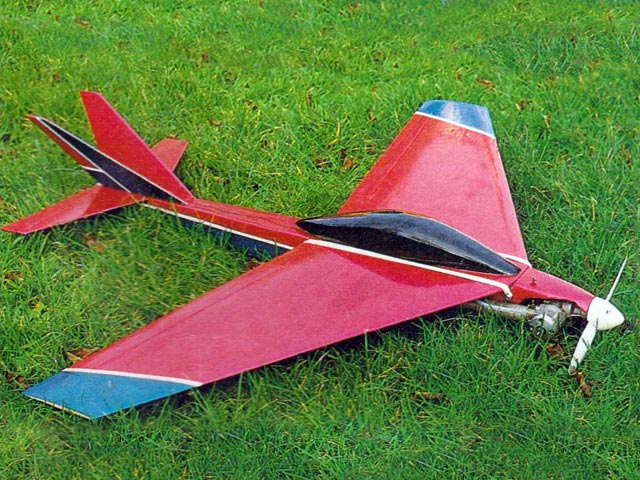