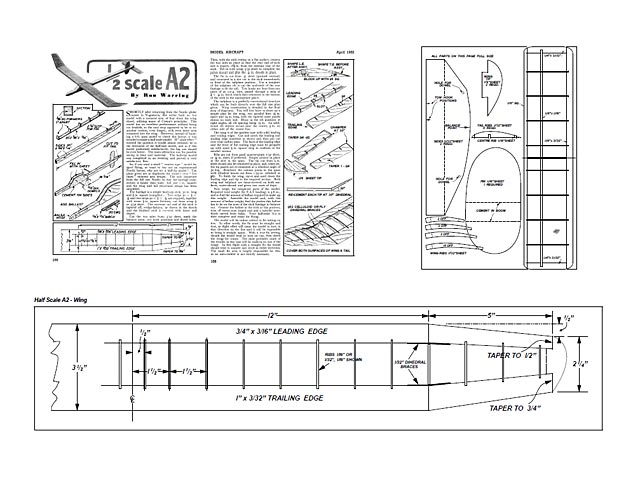 Quote: "SHORTLY after returning from the Nordic glider contest in Yugoslavia, the writer built an model with a moment arm of four times the wing chord, utilising many of Czepa's principles. This model has an excellent performance without being too freakish, so the next step appeared to be to try another version, even longer, with even more area crammed into the wing. However, instead of building a 6 ft span model to check this layout, it was decided to make a half scale model. If 'scale effect' entered the question it would almost certainly be to the detriment of the half-size model, and so if this model performed satisfactorily, the big one should be even better. The main attraction was the possible saving in time and material. The half-size model was completed in an evening and proved a very satisfactory flier.

So, if you want a small 'contest type' model for sport flying, or want to try out an experimental Nordic layout, why not try a half-A2 model ? The plans given are to duplicate the writer's own 'five times' moment arm design. The only departure from the full size Nordic is that the fuselage cross-section is larger than scale (full size 1 in square) and the wing and tail structural design has been simplified.

The fuselage is a simple built-up stick, 30 in long and 1 in square (complete). Two strips 30 x 5/8 x 1/16 and two strips 30 x 3/4 x 1/16 are required, together with seven 5/8 in square formers, cut from scrap or 3/32 sheet. The extreme tail end of the stick is tapered off, wedge-fashion, as shown in the sketch and the finished stick is covered with tissue and doped.

Cut the two sides from 3/32 sheet, mark the balance point, tow hook positions and dowel holes. Then, with the stick resting on a flat surface, cement the two sides in place..." 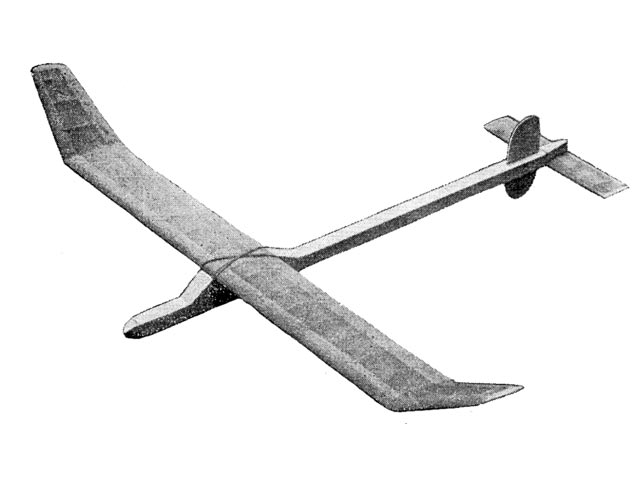