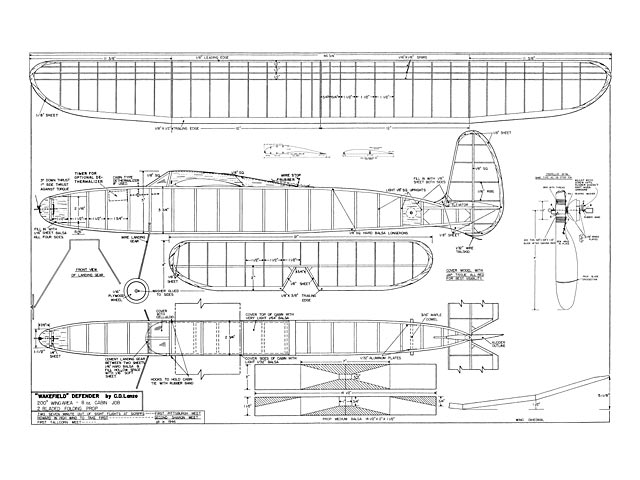 Quote: "CHESTER LANZO is one of the world's leading designers of rubber-powered models. Most of the experts concede that he is tops in rubber. He has won so many firsts, including numerous Nationals, that it is pointless to try to list them all. He is best known, perhaps, as this country's most successful flier of stick models one of which, a 300 square inch job, flew 63 minutes to win the Open Stick Event at the 1940 Nationals.

The Wakefield Defender, itself a highly successful performer, is a development of an earlier ship the Lanzo Record Holder (oz1460) which set a national record in June, 1941, by making two successive flights of 63 and 30 minutes. The Defender took first in the 1946 Scripps Howard, Junior Aviator, Air Races, making two seven-minutes out-of-sight flights, and then went on to take a first at Pittsburgh, and still another at the Iowa Tallcorn meet.

Most unusual feature of the Defender is the cabin, which can be hinged at its trailing edge to act as a dethermalizer. While this feature is optional, Lanzo has used it for years with singular success. This type of dethermalizer, incidentally pioneered on his 1941 record model, is better than the rudder-trim type of dethermalizer because it does not bring the model down in a spiral which can cause damage. With the cabin type of dethermalizer, the sudden increase in drag that comes when the gadget operates slows down the ship, at the same time permitting it to fly straight ahead for a landing. The installation of the optional dethermalizer is shown on the plans. Other than that, the model is distinguished by its simple construction and tremendous flight prowess. That multi-spar wing, by the way, is a great favorite in Cleveland, especially with Lanzo and Dick Korda. In fact, the success of the Cleveland boys with this type of wing indicates that they must have something good.

The fuselage is the conventional 'box,' which is to say that two sides frames are pinned down and assembled on the bench; later, when dry and removed from the bench, they are joined together by the top and bottom cross pieces visible in the top view. Points to note are the dowel rear rubber hook installa-tion, the filled-in nose construction, and the sandwich-type landing gear attachment. All these items, however, are almost standard practice on high-performance rubber models. The reader will do well not to substitute other wheels for the plywood ones shown. While these wafer wheels look a trifle silly in the front view, they do present minimum drag. Landing gears are one of the big sources of drag.

The tail is orthodox except, perhaps, for one feature that might not be familiar to every-body. This the use of a cambered airfoil with a flat bottom (not unlike the well-known Clark Y rib section) in the rudder. The curved side of this rib faces the left side of the model. In flight this produces a steady force in proportion to flying speed and tends to turn the airplane to the right. Bearing in mind that propeller torque tends to turn all rubber models to the left, this rudder configuration helps offset torque. At the same time it is a useful device for turning the plane in the glide. The four-panel multi-spar wing is ordinary but it is easily made in four separate panels which can be glued and butted together before covering. This method eliminates the messy operation of putting dihedral into a wing that has been made in one piece flat on the work bench. Be careful that the end ribs of each panel are slanted accurately from the vertical in the proper amounts, so that the ad-jacent panels come together at the proper angle.

The secret of any good rubber model's contest success is its propeller and rubber-motor installation. More than anything else - if you leave out the builder's experience in adjusting and flying - the prop-rubber combination determines duration. The clever designer manages an extreme rubber length - far longer than the distance between the two rubber hooks - and a good folding propeller uses those precious rubber turns efficiently, besides reducing drag in the glide. Lanzo, for example, almost doubles his rubber length, using a 48-inch long motor of 24 strands (not loops) of 3/16 flat brown rubber.

To keep tension on such a long rubber motor as it winds down, so that it won't sag and shift within the fuselage to cause diving or stalling, most builders prefer 'braiding' the motor. This means that they separate the rubber into two groups of strands, by doubling the motor around a post, then wind each group about fifty turns, finally bringing together again both groups of strands. Although this keeps the rubber taut between the hooks, it is possible to put a tremendous number of turns into such a motor. This is known as the White rope tensioner (named after Mr H White of England, who invented it).

Attention is directed to the simple type of stop on the rear of the nose block. The method of operation is this: As the motor unwinds and eases its pull on the prop shaft, the spring (A) pulls the shaft forward until right-angled wire ( B) engages the woodscrew (C). When this happens, the propeller ceases to revolve and the force of the wind then blows the prop blades back alongside the fuselage. Note detail of wire hinge (D). This hinge must be bound firmly in place with thread and needs to be well cemented. Note brass plates (E). The nose block should be so tilted that when it fits tightly in place, the prop shaft has three degrees down thrust and one degree right thrust. Another important finepoint is the thin, cambered section of the propeller blades. Be sure that the prop is balanced and dope and sand its finish until it is shiny and smooth.

Regarding the prop mechanism, Lanzo warns that too tight fittings may bind when the tensioner engages and an unfolded prop blade could cause the ship to spiral swiftly down to earth; also that any departure from the down and offset thrust shown will interfere with the prop blades folding close to the fuselage; that cutting away too much of the prop blade area reduces maximum climb; that odd bits of glue inside the fuselage may cut the rubber.

Best performance comes with climbing and gliding circles of about 400 feet. Use paper matches behind the top and left side of the nose block until you have determined the exact amount of thrust adjustment needed for your particular model. Afterwards cut away or add to the nose block as necessary. On hot days when thermals can be picked up at low altitudes be careful, for some Lanzo designs have climbed out of sight on power alone. Chet hasn't said that this one will but you'd better take a hint!" 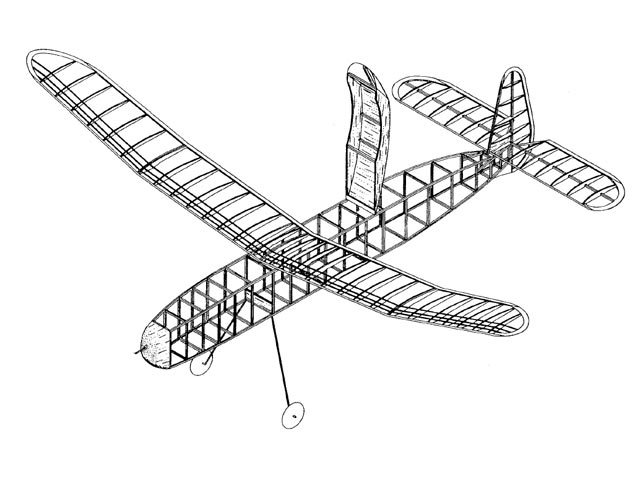