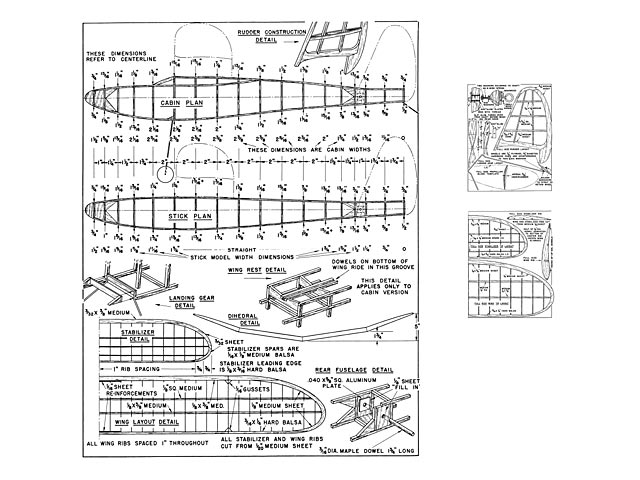 Quote: "EACH YEAR George Reich flies a combination stick and fuselage ship at the Nationals. Before the war this 'double feature' approach paid off by winning a first in the cabin event at the 1939 Detroit Nationals. Confounding those who don't believe that lightning can strike twice in the same place, Reich won first in Open Cabin with his combination stick and fuselage model, and captured second in Open Stick at the 1946 Wichita Nationals. This came mighty close to being the first model to win two separate events at one nationals. The full contest record of this particular ship is as follows:

The combination idea is a good one and should appeal to anyone who dislikes extra work. With the exception of the fuselage, the model is the same in either the stick or cabin events. Since most stick models have built-up fuselages like cabin jobs (the cross section rule for stick models is length squared, divided by 200, while the cabin rule divides by 100), the stick and cabin versions are much alike. A low windshield and slightly deeper fuselage mark the cabin version. One most unusual feature was the designer's successful use of the freewheeling type of propeller, instead of the commonly used folder.

According to the designer, simplicity in design and construction is the key to a successful contest model. It should be designed to allow quick, easy, and positive adjustments, and so constructed that damage can be repaired quickly. An example of positive adjusting is the system of keying the wing to the fuselage so that it cannot shift around. Think how many times you have seen flights go awry because of a shifting wing or tail.

For simplicity Reich used a freewheeling propeller with a tensioning device for the rubber (to keep the rubber taut in the fuselage after the propeller disengages from the shaft to windmill in the air.) The freewheeler is lighter than the folder, and easier to make. Adjusting with the freewheeling propeller proved easier and climb was more efficient, so that more altitude was reached. Though drag was higher with the free-wheeler than it would be with a well-designed folding prop, the extra altitude more than compensated for this disadvantage.

The box type of fuselage is another example of simplicity. It is repaired easily in case of rubber breakage. The Jap tissue covering is applied in two layers, running cross grain to each other. This adds greatly to strength. Reich disagrees with his Cleveland friends, Korda and Lanzo over the multi-spar wing. Reich believes that few spars, and those only on the bottom of the wing, enhance the smooth flow of air over the wing.

The rubber motor is made from ten strands of 3/16 flat rubber 80 inches long. This rope of rubber is doubled around a pole, making two groups of five strands each, then each group of strands is given 35 turns of the winder. The ends are then brought together and allowed to twist around each other. The motor is doubled again to make 20 strands. This stunt is common with contest builders. Before flying, it is important to remove any warps in the wing or tail. This can be done by softening the surface with clear thinner and then holding the surfaces in the proper position while the covering dries. The ship should balance at the front spar.

Before the first test flight put in a little right and down thrust by means of a paper match behind the top and the left side of the block. When you have determined the necessary thrust adjustments, either cut away or add to the block as necessary. The rubber should be adjusted for a right circle, the same as in the climb, of about 100 feet. After the desired gliding circle is achieved, add the necessary thrust adjustments to take care of the climb. Once the rudder is set for the glide, leave it alone, and make all further adjustments with thrust corrections." 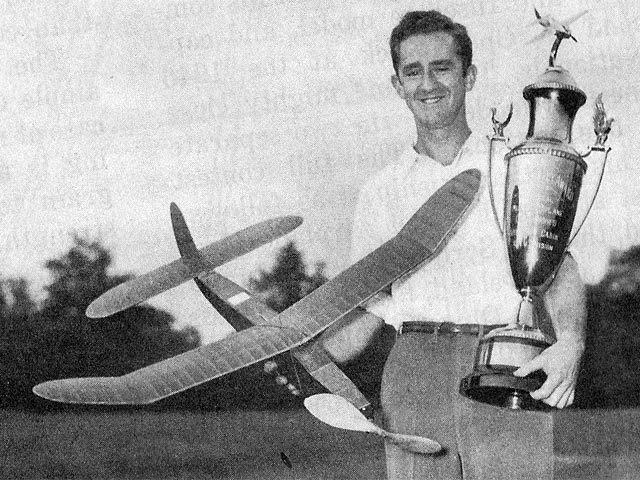