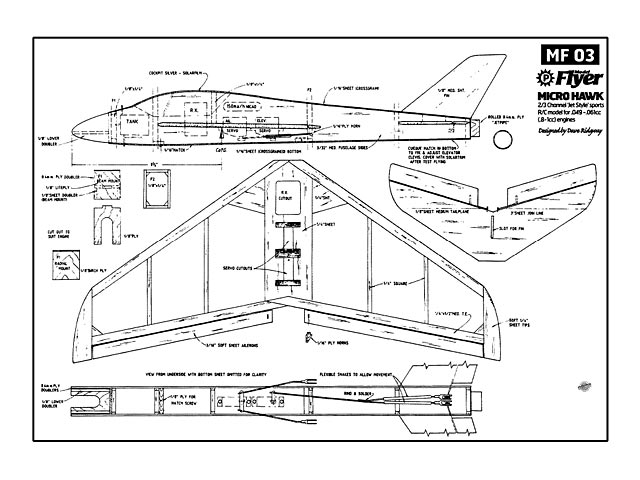 Quote: "Micro Hawk. This little 'Hot Rod' is just the ticket for livening up any flying session, it can be flown on two or three channels using a wide variety of .8-1cc (.049 -.061) engines. Construction cost is low and now there is an abundance of small 'budget' radio gear on the market which is suitable for the Micro Hawk!

CONSTRUCTION: The basic construction is conventional and will not tax anyone with basic "Aerornodelling" skills, before commencing however some consideration should be given to the finishing procedure. Most people will opt for "film" as I did, and if this is the case it is easier to cover the main components before final assembly. If using a small diesel remember the fuel attacks some types, so select a type of film not affected.

The wing is built flat over the plan after selecting some good quality strip wood for the leading and trailing edges. Try to get accurate spliced joints to add to the strength of the wing. Do not add the servo mounts at this stage, or you will not be able to get the wing through the fuselage at a later stage! When glue is set, give upper and lower surfaces of the wing a fine sanding with a large sanding block, and section the leading edge.

Fuselage is commenced by cutting out two identical sides, particular care being taken to get the wing and tail slots a good fit and in an identical position on both sides. Next mark the positions of the vertical 1/4 x 1/8 in strips on each fuselage side, remember to ensure they are handed left and right, and do not put one at the F2 position. The former F2 is constructed over the plan. Cut out the relevant front former, for either beam or radial mounting of the engine.

The fuselage is now assembled using the front former and F2, care being taken to get the slots for the wing and tail level, this can be checked by sliding wing in position and using a square. When satisfied remove wing and add the 1/4in xli8in cross members, which are all identical in length. The top can now be sheeted with 1/1 bin balsa used with the grain across the fuselage. Tailplane components are simply cut from 1/8in sheet balsa.

At this stage it is a good idea to fit all the major components in place to check on the alignments, and then either use pins or tack in place with Cyano. The servos can now be placed in their positions.

It is now time to make up the control linkages, the elevator pushrod splits at the rear and uses a short section of flexible snake to allow for the movement of the swept back tailplane. The rods are all from 16 gauge threaded rods cut to suitable lengths, at the split the rods are bound and soldered, if your soldering skills are not up to it you can bind and epoxy them together. Now whilst the underside of the fuselage is unsheeted install them in place and adjust for length. The aileron pushrods can now be made and checked.

The radio equipment can now be removed and the fuselage bottom sheeted in and the hatch portion made over the underside wing position. Before removing flying surfaces it is a good idea to mark the position of the inside of the fuselage on the wing and tail - this will help with the covering and final assembly.

COVERING AND FINAL ASSEMBLY: My preference is to cover the components before final assembly, if you do it this way trim the film back to allow for a wood to wood joint. Don't forget to fit the elevator horns to the elevators before covering. Once covered, the wing and tail assembly can be glued in position checking for accurate alignment. I tack in position then run medium viscosity cyano from inside the fuselage along the joint.

With the wing now permanently in position the 1/16 plywood servo mounts can be glued in place and the servos screwed in position. The covered ailerons and elevators are hinged using one of the wicking type hinges, I used the Dubro ones. The elevator pushrod can now be fiddled in position through the rear opening where the 'jet pipe' fits, if you have difficulty doing this a small hatch can be cut on the underside of the horn position, and then re-covered with film.

Initially set the control throws at elevatrors 1/4 in up and down, ailerons 3/16 in up and down. Finally add the 'jet Pipe' to finish of the rear end and fuel proof the engine bay before mounting the engine.

FLYING: Although not for the novice this little Hawk is quite easy to handle, and unlike many a small model will handle a breeze well. Prototypes were powered with a Cox Medallion 049 and a Black Widow fitted with 6 x 3 or 6 x 4 props, which all gave excellent performances.

As no throttle was fitted all landings were dead stick, the glide being adequate rather than spectacular - use plenty of up to flare it out before touchdown. I am sure you will get a lot of enjoyment and not a little excitement from Micro Hawk." 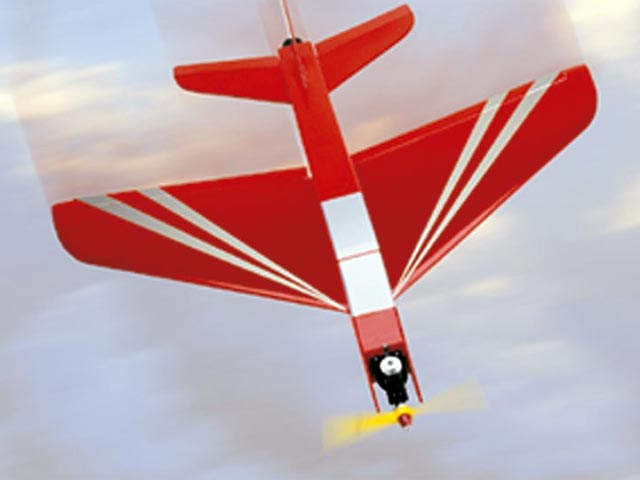