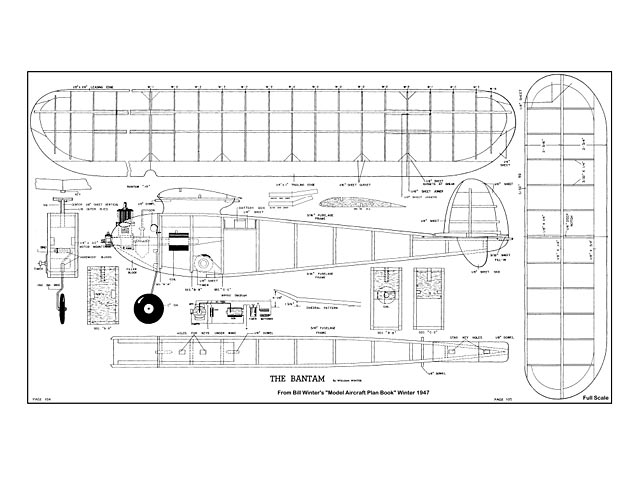 Quote: "The Bantam, by William Winter.

FOR those builders who like to fly a gassie that is neither a cabin job or that other extreme, the true pylon model with its very high wing location and lifting-type stabilizer, this Class A Bantam should be ideal. Although it is a parasol type, its force diagram is the same as the average cabin design. However, there should be nothing conservative about its performance, for its wing and power loadings are quite close to the minimums allowed under the present rules. As any experienced builder knows, the Bantam motor is a 'hot' engine and, with a smallish ship like this one, the performance also is apt to be on the hot side. It would be wise, therefore, to go easy on the test flights, taking plenty of time to achieve the proper adjustments.

As originally laid out, our Bantam had a span of 44 in and a wing area of 227 square inches. Walt Schroder, who has had plenty of experience with Bantams, remarked that he wouldn't use anything less than 275 square inches for this engine. As a compromise, we added one more rib section on each side of the wing, boosting the area to approximately 245 square inches. According to the rules, the required weight of this airplane for its particular engine is about sixteen ounces. (80 ounces per cubic inch displacement). With 245 square inches of area, the wing loading rules (seven ounces per 100 square inches) shows that this ship will have to weigh in at a shade over 17 ounces, at the least.

The construction is simple. The fuselage is the well tried box, made out of 3/16 in square longerons and cross pieces. The hardwood motor bearers are built into the fuselage, running through holes cut in the plywood fire-wall. The ignition is built in permanently with the units located as shown on the plan. Batteries may be moved for balance, back if nose heavy, and vice versa, if tail heavy.

Note how the laminated pylon is built up of one sheet of 1/16 plywood, faced with sheet balsa on both sides. This pylon fits down into the fuselage as shown in detail. The single wheel is mounted on a 3/32 music-wire axle that is bent as shown and fastened to the firewall. To provide three-point contact with the ground so that the model will be capable of take-off, two sheet-balsa rudders had to be used. The cross section of the stabilizer is symmetrical, which is to say that it is of the non-lifting type. If the wing position should be raised an inch or more it would be neces-sary to go into a lifting-type tail, or one with an airfoil for a cross section.

The wing is conventional, and has the popular polyhedral instead of dihedral. Experience indicates that polyhedral tends to roll the ship upright if it should loop and get on its back. Rather than use sheet balsa over the section between the leading edge and the front spar, we have used extra wing ribs more closely spaced together.

Covering is Silkspan, applied wet. This may be done by dipping the paper panels into a pan of water, then laying them over the area to be covered and doping the paper to the ribs and edges before it begins to dry and stretch. While this paper can be applied wet or dry, wet application seems to give the better results. About three coats of thinned dope (one part thinner, four parts dope ; use more thinner if the dope is at all thick) will close the pores of the paper and pull it tight.

The finished ship should be hand glided, over tall grass, if possible. Launch it smoothly at a spot about 50 feet away on the ground. It should glide a shade nose heavy, making a rather fast glide. If the glide is 'stally,' the ship will surely stall under power. Move the batttery box to get good balance or, if that is not sufficient, raise the leading edge of the wing with a sliver of sheet balsa to correct nose heaviness, or the leading edge of the stabilizer to correct tail heaviness. However, if the edge of the tail must be raised more than 3/32 in, also place a silver of wood under the trailing edge of the wing.

When the ship glides properly, give it about eight seconds motor run and launch it under low power. Observe whether it stalls. If it does, it is advisable to give the engine slight down thrust by placing a washer (or two if it should become necessary) under the rear of the engine to tilt it on its motor mounts. If the glide isn't satisfactory, continue the adjustments begun during the hand glide tests.

Due to the large amount of power for the ship and its probable speed, it would not hurt to put a little right thrust into the engine. This can be done by enlarging the motor bolt holes, then holding the engine twisted slightly to the right, while the nuts are tightened. However, when you decide to put in right thrust, slack off on the rudder. On successive flights you can build up your rudder adjustment. Too much right thrust and right rudder at the same time, could cause the ship to spiral into the ground in right circles under power. Done properly, there is no danger, and the big danger of crashes due to torque is gone."