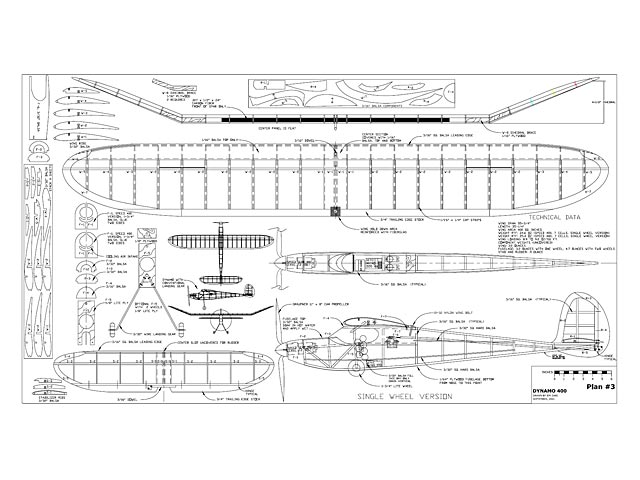 Note this plan was a direct submission to Outerzone by the designer himself.

Quote: "As a youngster in the early 1960's, I built countless stick and tissue models. The Comet and Guillows World War II fighter models were my personal favorites. These kits were inexpensive and were readily available at local hobby shops and drug stores. They all had nice plans, a milled sheet of 1/16 and 1/8 balsa sticks, wood wheels, a wood thrust button, a loop of rubber, printwood, and tissue. 1 remember getting up early before school to go down in the workshop to cut out parts with a single edge razor blade so I could lay up half of a wing panel before school.

Since I never had any luck in flying them with rubber power, most became static display models. After reading about tethered models, I tied a string through a wingtip of a Comet Grumman Avenger and learned how to make realistic carrier landings on a tabletop in my parent's basement.

The flying bug bit me. I built a very light Comet Cloudbuster and was able to get 15 to 20 second flights. Still not satisfied with this flight performance, I asked the local hobby shop owner for advice. He recommended a Midwest Dyna-Moe (oz6463). This was a gigantic model to me, with a whopping span of 33 inches. It was also very expensive in relative terms. I saved my money, purchased the Dyna-Moe, and had a ball building it. The plans showed a single retractable wheel and a 12 inch balsa folding prop that you had to carve and assemble. My first Dyna-Moe was covered with orange tissue and powered by several strands of 3/16 rubber. I will never forget the first flight at Bowman Park in Toledo, Ohio.

After release, the Dyna-Moe gathered speed and made three lazy circles, gaining about 40 feet of altitude. The flight time was probably less than a minute, but this flight had a significant effect on me. For the rest of my life, I have been a closet free flighter. Other Dyna-Moes, Jabberwocks (oz2978), Sparkys (oz85), and Nordic Gliders followed. With each model, my building skills and flight performance improved. However, the memory of that first Dyna-Moe is the most vivid of my teen years.

In 1997, I was looking for a model for the Graupner Speed 400 with the 4:1 planetary gear drive. This motor swings an 11 x folding prop at 4,700 rpm, while drawing only 7.3 amps with a 7-cell pack of Sanyo 600AR cells. I was thinking of a downsized Old-Timer when I ran across my original Dyna-Moe plans.

What a perfect model for electric power! Oops, I looked at the wing with only 132 sq in of area and decided it just wouldn't work. When Wally Simmers designed Dyna-Moe in 1947, the contest rules for rubber powered models called for cross sections and wing areas that are pretty silly for an R/C model. Besides, a few years ago, my good flying buddy, Don Belote of the Toledo Weak Signals, built a double size Jabberwock for a geared 05. The Jabberwock is a 2-wheel version of the Dyna-Moe. Although it flew, it did not have the powered performance or majestic glide he was accustomed to. The Jabberwock was relegated to a hanging display model in Don's garage.

After reviewing the Dyna-Moe plans, I decided to scale the wing and
fuselage independently. The fuselage was scaled by only 23%, which results in a length of 35-1/4 in, and the wing by 65%, which results in a wingspan of 55-3/4 in, with 400 sq in of area. I also changed the airfoil to that of the Coronet (oz7482) Old-Timer. I am not sure what this undercambered section actually is, but it has proven to be a tremendous performer on previous electric models. In keeping the electrifying aspect of the new model, it was named Dynamo 400.

Three prototypes have been built and flown for almost two years. They have been powered by the Graupner #1719 Speed 400 gear drive with the 4:1 gear ratio, the Graupner #6501 Speed 480 gear drive with a 3,34:1 gear ratio, and the Astro Brushless 020 with the 4.4:1 planetary gearbox. Seven cell packs of Sanyo 600 AR cells and Graupner 11 x 8 CAM folding propellers have been used with all three motors. Flight performance has been sterling with all three. The biggest difference is the improved climb with the Speed 480 and the tremendously longer flight time with the Brushless 020. Still, air flight times range from 12 minutes on the Speed 400, to about 14 minutes with the Speed 480, and nearly 18 minutes with the Brushless 020.

Does the Dynamo bring back memories of that rubber powered Dyna-Moe? It has the same graceful glide, a far better climb rate, and best of all, I don't have to chase the Dynamos. That's the beauty of a radio controlled electric powered free flight model. You get superb flight performance, no noise or grease, and no rubber lube or broken rubber motors. The popular term for such a model is a 'Park Flyer.' That's how this all started, back in Bowman Park in 1963.

Design Features: The Dynamo is simply an enlarged and improved version of the Dyna-Moe rubber model. It features old fashioned stick and tissue construction with a little bit of carbon fiber and plywood thrown in to provide a rigid and light airframe. Instead of tissue covering, I used Litespan and modern covering films.

The Dynamo can be built with a single wheel, or a twin wheel version similar to Jabberwock is shown on the plan. If you want to save about a 1/2 oz, don't put a wheel on the model, it'll land just like a glider. However, I highly recommend the single wheeled version. The Dynamo will roll for 10 to 15 feet upon landing with the single wheel before coming to a gentle stop. The two-wheel version allows the Dynamo to take off in about 10 ft from a paved strip; however, the long landing gear tends to catch on the grass, resulting in a nose-over upon landing.

The wing has a flat center section with tip dihedral. This eliminates the weight and complication of plywood dihedral braces at the center. This, in itself, saves perhaps 1 oz of weight. Carbon fiber is used to reinforce wing spar in the center section. The resulting wing is super strong and yet quite light.

The fuselage was designed with a tube motor mount to match the spinner that comes with the Graupner 11 x 8 CAM folding propeller. The extra weight and complication of a hatch is eliminated in the design, The width and length of the battery/RC area was carefully measured to allow for the installation of virtually any flight battery/receiver/speed control/servo combination in use today. The resulting Dynamo is easy to build and a joy to fly!

CONSTRUCTION: Stabilizer: Pin down the 3/16 x 1/4 spar and trailing edge over the plan. Mark the position of the S-1 ribs with a pen, and pin the 1/16 bottom sheeting at the center from the spar to the trailing edge. Glue the 5-4 and S-5 stabilizer tips in place and add the 5-1 and 5-2 ribs. Be especially careful to line up the S-1 ribs, since their position will determine the placement of the vertical fin and rudder.

Test-fit the 3/16 sq balsa leading edge and trim the ends to fit flush with 5-4 at each tip. Glue the leading edge in place. Add the 1/16 balsa top sheeting at the center section and pin..."

Update 10/12/2019: Replaced this plan with a more nicely cropped version, thanks to Eflyer7. 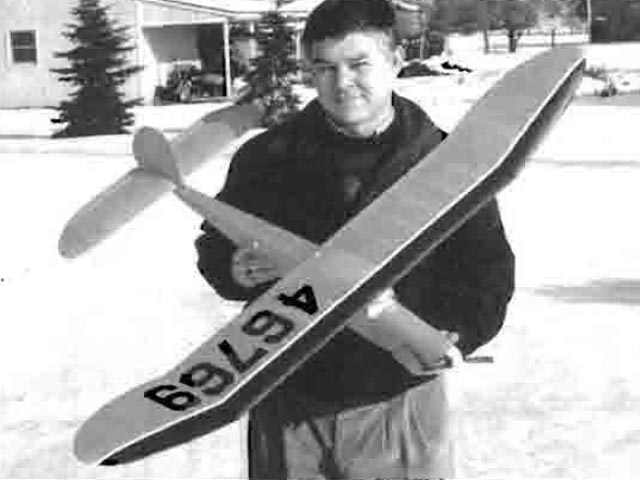