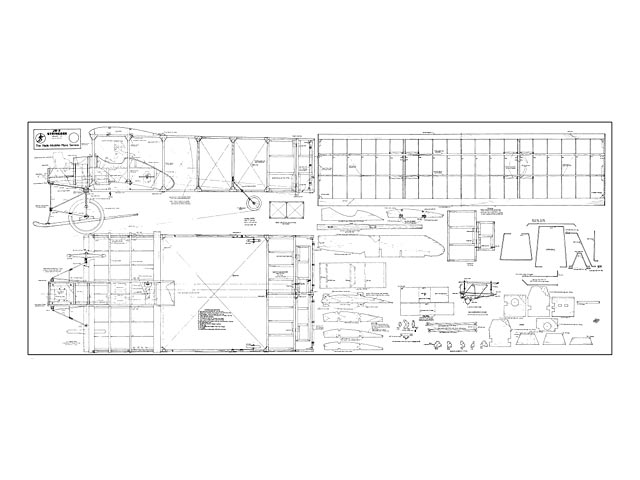 Quote: "Do you want some vintage atmosphere? Then get the spruce and wire for a 4Oin. span 'old time' freelance sports model for .40 four-strokes and three functional RIC by Alex Weiss.

MY DESIRE TO build the JH2 arose out of a number of separate factors. The first was a fascination with a fellow club member's 0561 four stroke powered own design model which could be seen last summer gracefully and quietly meandering around the sky. The second, which resulted directly from the first, was a growing desire to own and fly a four stroke powered model. I think that it was really the engine noise when throttled back which did it. The third factor was my need for a change from high speed jet type models which I had been flying regularly for two years - for example, the MiG-25 Foxbat (oz4801) and Viggen seen as RM plans - and the final thing was my interest in early, pre-World War I designs.

I am sure that you will agree that certain types have been done to death, for example the Bleriot and Blackburn monoplanes, whilst early biplanes have been largely ignored, or so my search of the MAP plans books revealed. One fact which quickly became obvious during my research was that the majority of biplanes of that era used a pusher configuration, with twin booms. Somehow I couldn't bring myself to risk running a brand new four stroke engine in a pusher layout. In any case, l didn't feel pre-pared to put the necessary effort into a fully detailed scale model.

The final impetus came from the aforementioned friend who asked me to sketch out a design for him with the following specification:

1. It had to be a one piece model which would fit into his car. We agreed a maximum span of 40 in.
2. It should be powered by his OS 61 four stroke engine.
3. The aircraft must be a biplane, with a skid to allow a wooden propeller to be used, even when flying from a rough field.
4. The model must look realistic; something like a 1909 Voisin was mentioned.
5. Closed loop controls should be used.
6. The aeroplane should be fitted with spoked wheels.

My friend has made a fair number of these spoked wheels recently using small bore or micro bore central heating copper pipe for the rim. This is bent into a circle over any suitably diametered cylinder, and then the outer half of the tube is removed on a handsaw. The thing which amazed me was the speed and ease with which he was able to produce completed wheels.

The resulting first prototype, although it flew successfully, was both overpowered and overweight. The latter is not surprising as the four stroke OS 61 is 7oz heavier than its 0.40 cu in stable mate, and with an over-heavy rear end, his model had to carry 7 oz of lead ballast in the nose to get the centre of gravity in the correct place. In flight, the model looked superb, and its performance was sufficiently encouraging to persuade me to modify and improve the design. I then built a second prototype which is the subject of this article. The main changes from the first prototype are:

1. The fitting of a central fin and rudder.
2. The shortening of the rear fuselage, so that no ballast is required when a 0.40cu.in. four stroke engine is fitted. The position of the radio equipment has also been moved forward.
3. A fully sprung main undercarriage has been incorporated.
4. An improved method of attaching the wings to the booms has been devised.
5. The use of remote pivot plates on the closed loop controls relieves end loads on the servo output bearings.

I am sure that some of you will query the lack of ailerons on a model which has no dihedral. This is deliberate, and was done for a number of reasons. The first is that dihedra I would look wrong, as in my opinion would ailerons, and ailerons would have added significant complication to the design. The second was an attempt to match the slightly lurching turns of aircraft of the period. In fact, extensive flight testing has proved that with the low centre of gravity and generous rudder area, turning performance is excellent. Ten or 20 degrees of bank is quite enough to give a realistic turn, whilst steep turns result in considerable sideslip; not to be recommended at low altitude.

One point that came out during prototype evaluation, which may have been missed by some owners of four stroke motors is the danger of corrosion, although this problem has certainly been highlighted by Peter Chinn in his engine reports. My clubmate's OS 61 four stroke needed new main bearings after about 60 flights. It is now clear that this was due to incorrect stopping procedure. He was using the normal two stroke method of cutting the engine by pulling backthethrottle trim at idle, instead of pinching the fuel pipe after 30 seconds running at full power. Fortunately, the engine suffered no other damage, but the lesson is clear. To be doubly certain, a few drops of light oil should be squirted into the engine through the crank-case breather, and the engine turned over a few times after each flying session. For those of you not lucky enough to own a suitable four stroke engine, there should be no problem in fitting a 0.30 to 0.35 two stroke motor.

Finally, in case you may be wondering about the name JH2, it was inspired by the 0H2 and FE2, except that my clubmate's name is John Hearne and !therefore used his initials. We christened it 'Stringbox' as we felt it was descriptive, retaining JH2 as a pseudo type identification.

Construction: This is definitely a model for those who enjoy building. Whilst there are no particularly unusual constructional techniques employed, the building sequence needs to be followed carefully, otherwise attachment of the booms to the bottom wing becomes impossible. Furthermore, the installation of the radio equipment and associated control runs is much simpler if it is done before the top wing is fitted in place. The rigging wires should not be omitted as not only do they strengthen the structure, they improve the looks too..." 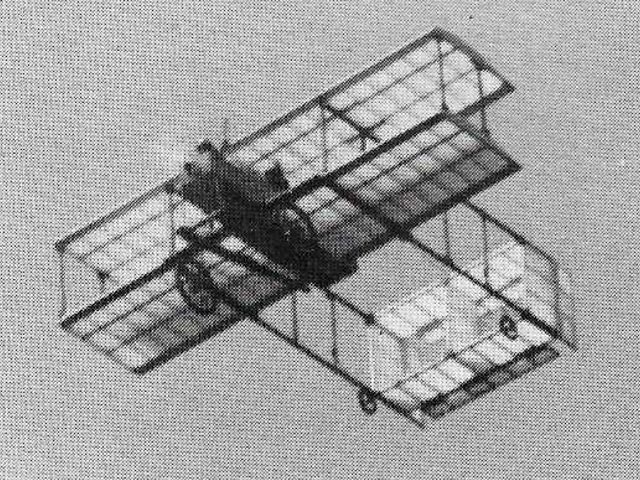