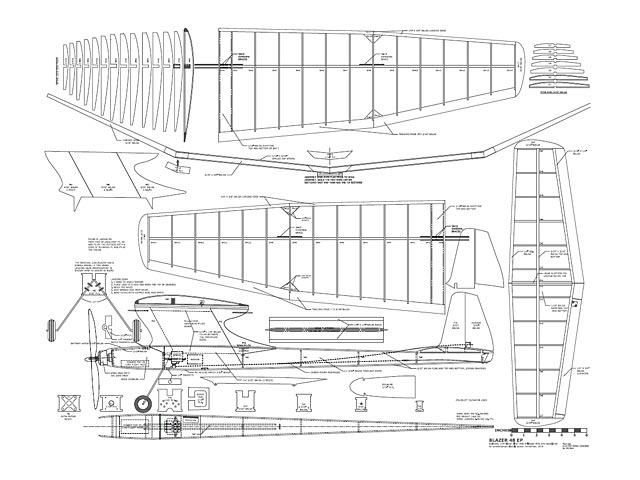 Note this plan was a direct submission to Outerzone by the designer himself.

The original Carl Goldberg 1/2A Blazer (oz854) was a FF design at 40 in wingspan. This here is a modern re-drawn version, enlarged up to 48 in span for RC with electric power.

A few years ago one of my fellow club members built a Goldberg 1/2A Blazer from an original Carl Goldberg free flight kit. It was just too small for the power system and RC gear used. However, it was certainly a nice looking model and flew reasonably well.

We decided to enlarge it to a wingspan of 48 inch resulting in a model with 350 square inches of wing area. The resulting Blazer 48 EP has been a pleasant surprise. A PDF of the full size plan is included if you are interested in building this version of the Goldberg classic. I had parts cut for this model by Bob Holman. You can contact him at http://www.bhplans.com/ if you want a set of laser parts and plans.

I chose the powerful and reasonably priced Emax 2822 motor. This motor weighs 1-1/2 ounce and can deliver up to 180 Watts on a 3S pack. On this model I am using a GFORCE 80C 3s 460 mah battery (1.6 ounce) from Value Hobbies with an APC 8x4E prop. This combination results in 110 Watts at 9.9 amps, which is perfect to take this model up nearly vertically.

There are a couple of recommendations for this motor. First, the shaft is a bit long and can bend as a result of a rough landing. I cut off about 1/4 inch with a Dremel cut-off wheel to solve this problem. Secondly, the small screws that hold the motor in the motor mount are flimsy and strip easily. I had one of these motors pull out of the mount at about 300 feet causing some anxious movements. I replaced them with socket head M3 screws from Ace hardware.

Construction is very straightforward. One major change was to design a conventional two-wheel landing gear instead of the single wheel on the original. This has allowed unassisted ROGs from grass fields.

The stab on the Blaze is double tapered. Instead of a clumsy split elevator, I decided to use an elevator on only the left side of the stab. This has proved to be very effective. I use a bit of down elevator on the climb out and a bit of up on the final landing approach.

A hatch is provided on the bottom of the fuselage for radio gear access and a magnetic hatch cover up front is included for quick battery changing.

The model will ROG from pavement or short grass in about 10 feet. The climb starts out at a steep angle and approached vertical at about 100 feet. I typically use some down to keep the model pointed up. I usually make a steep left bank at the apex to level off the flight. I am getting about 4 minutes with a 15 second climb in still air.

The Blazer 48 is rock steady and easy to control and is great in light thermals. 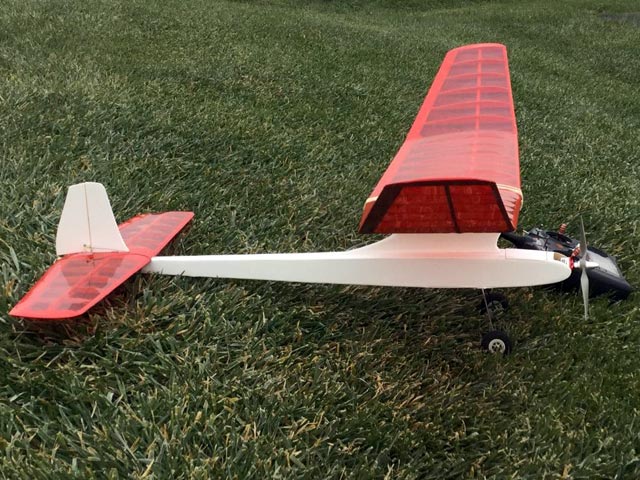