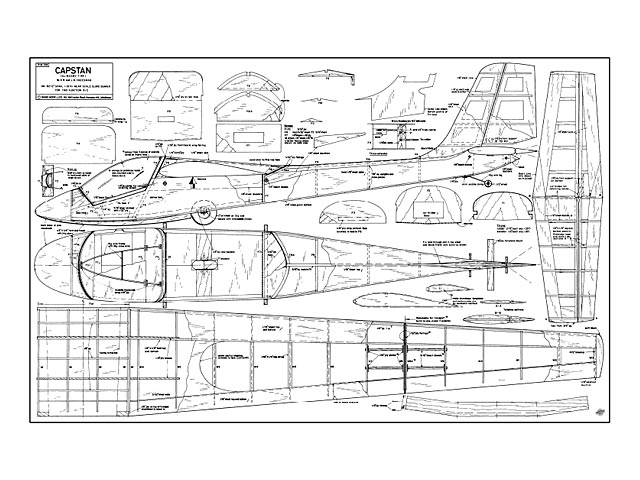 Quote: "AFTER having flown through two flying seasons with none other than the faithful old Soarcerer (oz8762) initially with single, then with two channel proportional, we began to look around for something a bit more 'like the real thing,' as the plastic models advertisement says. Thus evolved the Capstan, what we consider to be a practical near-scale soarer, for two function radio operating rudder and elevator.

The plan was initially scaled up from drawings generously supplied by Slingsby Sailplanes, the manufacturers of such well-known craft as the T21, the Skylark and the Dart. Our model, to 1/8 scale gives a span of 82 in, and a loading of approximately 14 oz/sq ft.

In the air - and on the ground, too, for that matter, the model looks like a full-size machine, despite having rather more dihedral and increased rudder area. We make no claim that this model, in its present form, could win any scale contests but we trust that, like us, you will appreciate its ideal proportions - particularly the fuselage, into which almost two sets of radio gear would go! We feel that this plan will supply a demand for an easy-to-build, practical, and very near scale soarer of elegant appearance. Those wanting to take things a step nearer true scale could of course use ailerons and reduce the dihedral, but we feel that this would make this too much of a specialist's model, and over-complicate things. Those wishing to make a Class 1 scale job will no doubt want to do it all from scratch, anyway.

CONSTRUCTION: Fuselage: The method of construction of the fuselage is basic and should present no difficulties, so We'll simply pick out the main points of note. The two fuselage sides should be selected from similar sheets of hard 1/8 balsa, and the 1/8 sq uprights added before joining. Join the sides, using formers F5 and F7, then join at the rear with F12. Due to the radius of curvature at the nose, it was found easier to use a jig. We have shown this as a scrap-view on the plan.

All 1/4 and 1/8 in sheet doublers and 1/8 sq cross members can now be added, together with the wing and tailplane retaining dowels. The rear top decking can be completed once Fi3a to Fri are in position, together with the 3/16 sq stringer.

The noseblock could be made of hardwood, or reinforced with fibreglass, to prevent dents and scratches appearing as they have done on our original. Obviously the nose-block is not added until the under-sheeting has been completed - 1/32 ply is included near the nose - together with the skid.

A point worth remembering is that the original turned out a little tail heavy so, rather than putting several ounces of lead ballast in the nose, the inside could be 'beefed up' around the canopy area with glassfibre matting and resin. The canopy itself was moulded from acetate sheet, on our original model, a male mould first being carved from balsa wood. If you are keen to keep as near scale as possible, then we recommend you to do this, too. Otherwise, if you are not too worried by aesthetic considerations, the canopy could be made from flat sheets, over the frames. On the other hand, one of the numerous people advertising under 'Plans and Parts' (see classified advertise-ments) may decide to produce one.

Wings: The wings are simple in construction, but make a rugged structure when completed, with their sheeted leading edges, built-up trailing edges and cap-strips. They are made in three pieces for ease of transport, and we have found that dowels are quite satisfactory for joining the panels. They will flex under excessive loading, thus taking the stress from the actual structure, but will break in the event of a real prang. Tongue and box fixings, at this point outboard, would be too heavy and, in any case, do not have the flexibility of dowels, being designed for purely fore-and-aft knocks.

To make the ribs, first cut two templates from ply (or metal, if preferred), for root and tip ribs. Now use the sandwich method for producing the tapered set of ribs. That is to say, take the requisite number of rectangular 3/32 sheet balsa blanks, and pin or bolt them together, with the root template and tip template at each side, and carve and sand to the correct contour as a block. When unpinned (or unbolted, as the case may be) a set of ribs for the tapered wing results. They should, of course, be notched for leading edge, spars, etc, before separating. 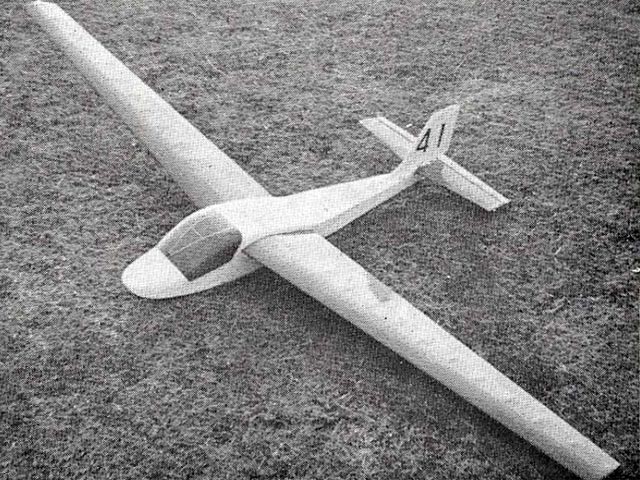