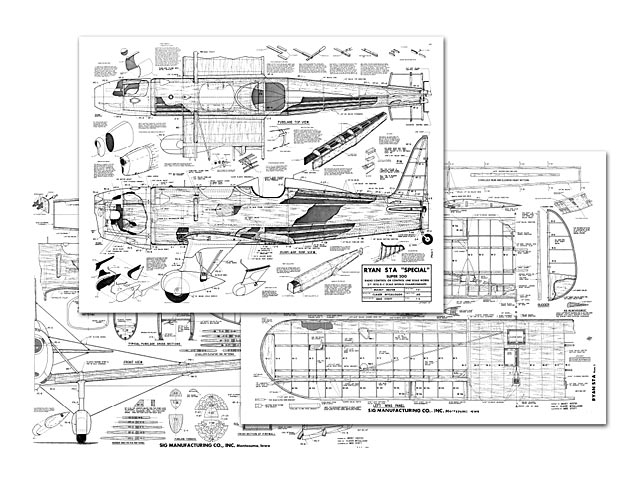 Like most scale builders, the Ryan STA has always been one of my favorites and I had thought about building a model of it for a long time. Experiences during the RC Scale event at the Bremen World Championships of July 1969 and my selection as a member of the US team for the 1970 Scale World Championships brought the classic lines of this famous airplane to mind again as the ideal subject for the trip to England.

Fortunately, the Antique Airplane ssociation Fly-in is located nearby, so as the Labor Day weekend approached, every day I'd load cameras into my trusty Super Cruiser and fly to Ottumwa to try and catch cry early arrivals. Five or six Ryans generally show up for this annual get-together of rare old timers. But I was looking for a speacial kind of Ryan - one with a painted fuselage instead of bare metal and a covered front cockpit to provide a place to mount R/C equipment, saving the rear cockpit for complete detailing.

As I was watching the activity Friday evening suddenly the search was over. Taxiing by was a real eye-catcher. With a slick red, white and black color scheme, set off by checkerboarding on the bottom of the wing and stab, it was even better looking than I had hoped.

The owner and pilot, John Gosney, had been at a nearby airport practicing for the aerobatic competitien to be held Saturday and Sunday. I introduced myself to him, explained what I had in mind and asked for a few minutes to take pictures of the plane and closeups of the parts. Four cameras were used. This kept the shutters from overheating! Including some measurements of the markings, the job took a lot longer than expected and it was two hours before the man could go flying again.

The pictures were really valuable in designing and building, so it was well worth the extra effort getting them. It took some time to get the plans drawn and construction did not start until early 1970. The basic model was completed in about a month but trying to get the flying wires, rib stitching, pinking tape, fairings, wheel pants and many other fine points to the high standard necessary for world competition took much longer. Six hours for a set of rudder pedals sounds like a long time but the there is a lot of sotisfaction in getting a detail exactly right. I've heard it said that a mole model isn't done until you quit working on it. The departure with the team to London set the date for the completion of the Ryan.

On display in the exhibition tent at Cranfield the model was a favourite of modelers and spectatars alike. It gave the scale judges problems, for due to the way the FAI rules were written it wasn't possible to give as much credit to a model with a lot of detail, such as the Ryan, as they thought should be awarded. Later, at meetings at the FAI Scale Rules Committee discussions of this scoring flaw which favors model subjects with littl or no surface detail, led to proposals for changes that were later adopted and are new part of the regulations for international competition.

During flying rounds, the Ryan turned in a realistic performance, I had watched John perform aerobatics in his Special, so to help make maneuvers as much like the full sized aircraft as possible, flights were performed with the Enya .60 throttled down and swinging a big 11 x 6 prop. Final results found the ship in second place, topped only by Mick Charles of the English Team..."

Note this plan was incomplete when first listed here. There were only 2 of 3 pages here. It is unusual for us to post an incomplete plan (or at least, to deliberately do that). But the most likely way to find a scan was to post this, then ask for help. [Fixed now. Many thanks to all.]

Quote: "Steve, Today you posted plates 2 & 3 of Sig's 72 in Ryan STA by Maxey Hester and asked for plate 1. This complete plan was printed in a construction article in Sept 1971, Model Airplane News. As near as I can tell, the plans are identical. I attach a scan of plate #1, the fuselage side & top views, from the magazine article, scaled to match the 11.50 in wing chord shown on your plate #2." 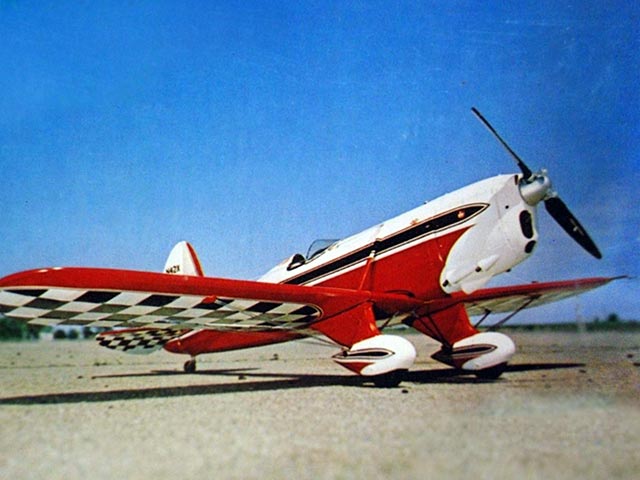 Ok, we have sheet #1 now. Excellent. Thanks to all who helped with this. The clearest and highest res version is the one we'll use here.
SteveWMD - 06/12/2019
Long time dream come true. I have looked for the plans of this superb kit ever since I built a Tern Aero rubber powered model of the ST-A as a kid back in 1980. In my opinion, John Gosney's STA Special is the most beautiful example of an aircraft with outstandingly graceful lines. A true classic. Thank you, folks!
Martin - 06/12/2019
Add a comment