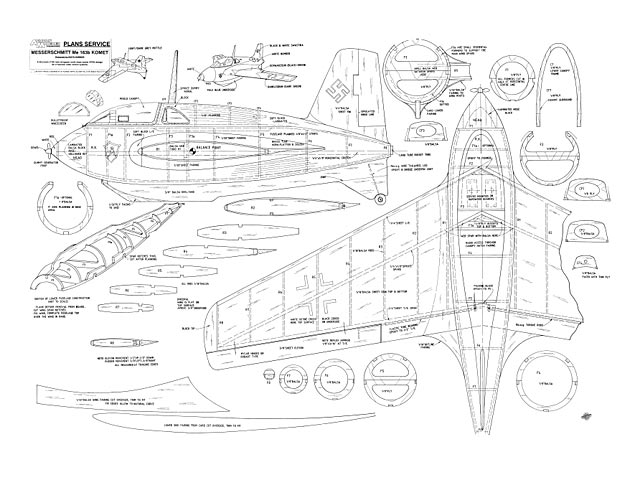 Quote: "Keith Humber designed this PSS version of the infamous Komet at 44.5 in span for fun and frolics on the slopes.

The full size Me163b was a rocket propelled fighter of approximately 1944 vintage with a tremendous performance for the late war years of round about 600 mph at a time when our propeller driven machines would just about exceed 430 mph. There were however, a couple of snags! The power-on flight time was very short - only a few minutes - the rest of the flight being undertaken as an efficient glider. Worse than the short power-on flight, from the pilot's point of view, was that if he made a bumpy landing and there was a small amount of fuel left in either of the separate tanks, the machine could simply explode on touch down. In fact, quite a few pilots of Jg400 were lost in that fashion. The fuel was so unpredictable that if an apparently empty can that had contained one of the fuels was contaminated by even a drop of the other fuel, the explosion was devastating. However, the interesting part for me was the fact that the Me163 was a superb glider hence the PSS connection. So onto the model.

The Concept: A while ago I had a letter from Tony Charnock who had made a powered Me163 which I had designed quite a few years ago. He had altered the construction, not used the engine and had some super flying as a PSS. So I thought I ought to try it myself which is what I have done here. This model is completely redesigned with a different, much lighter construction to the powered machine and does really go with a sparkling performance. But a word of caution - it does need a good wind - about a force 4 at least - and a steep, sharp-topped slope. It ain't a floater but it sure does go with the right conditions!

Constructionally, it is reasonably simple. The fuselage is made by building the bottom half flat on the horizontal plan, planking with 1/4 x 1/8 in balsa planks before removing from the drawing. The spar notches are cut through the longerons/crutch and the wing fixed into position with epoxy. The fuselage top half is then built on top of the wing in the hand.

Wing: The wing will have been built over the drawing. It uses 1/16 balsa ribs, 1/4 x1/8 spruce spars top and bottom and the LE and TE are cut from 1/4 in sheet. The wing is sheeted with 1/16 sheet top and bottom and the spars are braced with vee braces at the centre joint and webbed with balsa. There is no dihedral but the top surface is a straight plane which gives about 3/4 of dihedral on the lower surface only.

The elevons are shaped from 3/8 sheet and hinged with Mylar. Operated by 10 SWG torque rods with a plastic snake tube as a bearing, the pushrod attachment is from brass tube flattened, drilled and soldered onto the right angled bend on the 10 SWG torque rod. The torque rod itself is buried into the fixed sub-TE which is epoxied at a slight reflexed angle about 1/8 in at the TE. The wing is fixed into the lower fuselage (refer to the previous notes on fuselage construction).

The fin is made from 1/4 in sheet with a false rudder hinge line painted on. The canopy fairing is constructed in the same way as the fuselage - 1/8 formers and a 1/8 ply lower canopy frame all planked with 1/4 x 1/8 balsa planks cut from sheet. The cockpit hood was moulded on a male mould pushing the perspex through a 1/2 in ply hoop outline using a heat gun and patience. See if you can adapt a commercial canopy - it's a lot easier!

The whole canopy fairing detaches for radio access etc and is fixed with a 3/16 hardwood dowel at the rear of CF4 and a turn button screwed at the nose..." 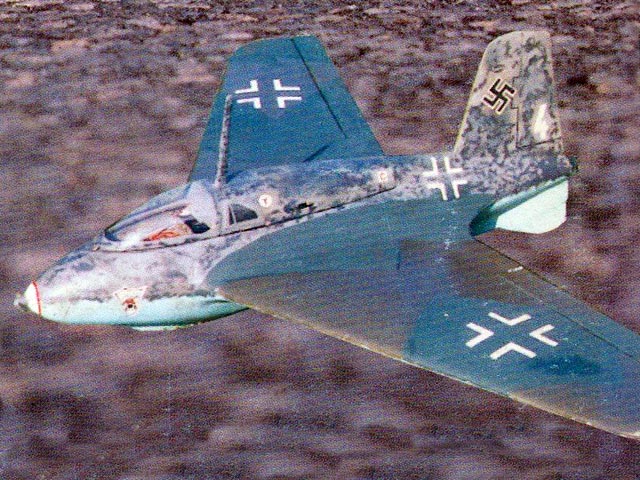 Built this model many years ago, at that time I was new to flying wings and deltas, I found out after the test flight that the CofG on the plan was too far forward. The aircraft climbed almost vertically under full power, but when throttled back it went into a vertical dive and could not be recovered. The aircraft fortunately crashed into very soft ground and a friend of mine re-built it and moved the CG back to a more appropriate position. It was fast but flew well. Images will be uploaded to site.
David Wright - 06/12/2019
Hi, Please see attached images of the Messerschmitt Me 163b Komet (oz11779) by Keith Humber [more pics 004-006]. Hope that they are of use. Many thanks,
David Wright - 06/12/2019
Excellent pics, David. Very atmospheric. Many thanks.
SteveWMD - 06/12/2019
Is the plane sheeted?
pete - 04/01/2020
Of course. The article explains in detail.
SteveWMD - 05/01/2020
Add a comment