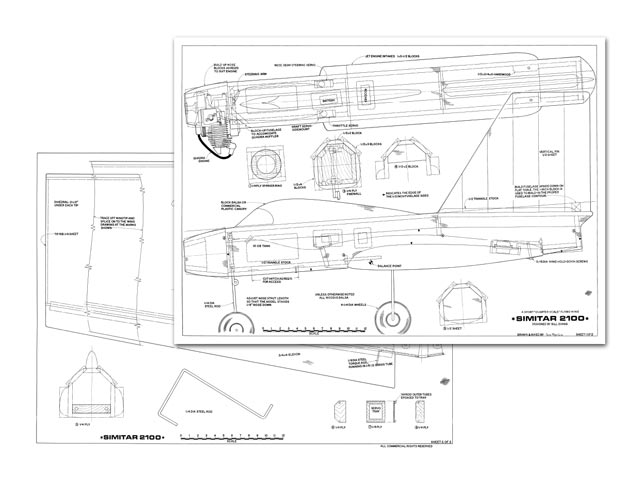 Quote: "The Simitar series reaches its ultimate with this Quadra-powered version. Just the ticket for big bird flying when you feel that conditions do not warrant risking your 1/4 scaler! Simitar 2100, by Bill Evans.

HOW FAR AN IDEA can be carried is determined only by our imagination, perception, and diligence. On December 12, 1974 when I flew the first Simitar I was totally involved with that moment and how it would fly; if at all. In my wildest fantasy I could not have dreamed that the basic concept of the Simitar (oz10187) would result in more than 14 different design configurations. Since there had been .020 .15, .19, .35, .40 and .61 Simitars, a 19-pound, 100 in span version powered by a .90 just had to be a reality.

The Simitar 2100 is twice the size of the Simitar 540 (oz10196) and is the gentlest and easiest to fly Simitar I have ever put in the air. Its glide ratio is excellent and dead-stick landings are a cinch.

You will find that the 2100 can be flown in high wind conditions that would normally ground most quarter-scale size aircraft In fact, proof of this airworthiness in heavy winds was demonstrated at the 1980 Quarter Scale Fly-In at Las Vegas. When I signed up at the meet I was told that since the Simitar 2100 did not satisfy scale requirements (there has not been a man-carrying Simitar), it could not be flown during normal flying rounds but only before or after the scheduled quarter-scale times. So on Saturday I watched the flying of the many magnificent ships at the meet, until a strong wind (30-40 mph) came up around 11:00 am and began blowing sand across the dry lake. All flying ceased. Since there were hundreds of spectators who had come to see flying, the Contest Director told me that if I wanted to risk my ship, it was okay to put up the 2100. The dust storm was so heavy that twice I actually lost sight of the 2100 on the takeoff roll. But it was in the air and the flight was recorded by PM Magazine and shown that night on local TV.

Construction Tips: Since the construction is quite straightforward and those of you who will be tackling this project are experienced builders, there is no need for a great many construction notes. However, there are a few important thoughts you should bear in mind.

It's important too to set the wing at 2° positive to the ground. This setup is accomplished by adjusting the nose gear so that the wing leading edge is 3/16 in higher from the ground than the trailing edge. Be sure that the elevons are set about 1/8 in up with neutral trim on the transmitter This is to provide the necessary reflex required for a flying wing.

Built per plan, your quarter-scale Simitar 2100 will be a rewarding project."

Quote: "Hello Mary, Here is the offering to share the plan and documents of the SIMITAR 2100 By Bill Evans on Outerzone." 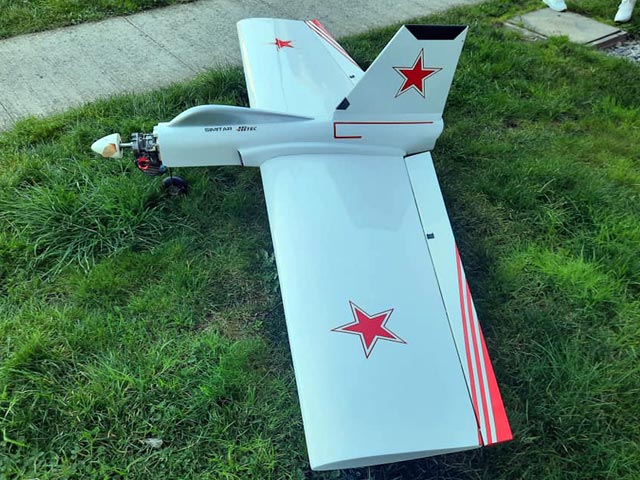 Hello. My name is Ariel, I am sending you some photos [main pic, 003-006] of my Bill Evans Simitar 2100, it is a great plane, built from the plans on the page. I tried to build it as the indications, with an old Quadra 35cc according to what the plan indicates, all very "old school" I hope you like it. Greetings from Concepción, Bio Bio region, Chile.
Ariel Gangas - 06/08/2021
Add a comment