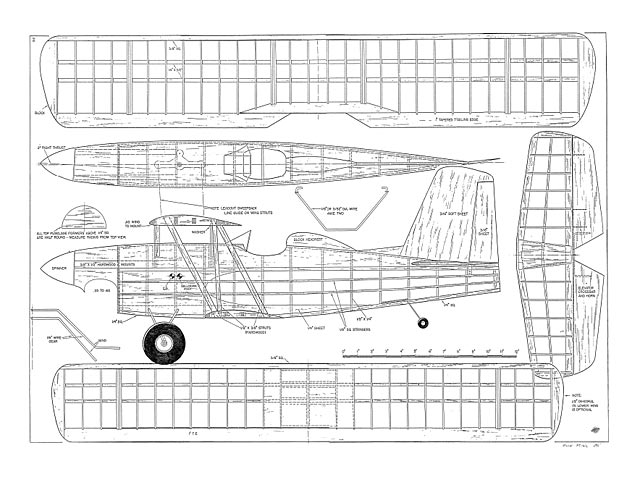 Quote: "For Dual-Ukie Instruction. It has scale looks, it is big, powerful and loud. Thus it will draw a small crowd at a ballfield. Primary Trainer PT 16-1/2, by Don McGovern.

Once upon a time an inter-office memo decreed: what dis company needs is a goood Primate Raining Zeppelin. (Good no doubt for aerial infection of enemy's forests with nasty-toothed monkey business what will inflict severe lacerations on lumber-cutters intent on selecting knot-free longeron stock.) You too would be nasty-toothed and angry if you wuz a primate dropped from a Zeppelin.

That ancient warfare memo failed to clear one stupid secretary however, who was not so hot on her shorthand. And so in due course der memo arrived in der garage out back reading: whut thiss kumpany kneeds iz ah goood Primare Taining Zeventilen.

Nowin of this kook in a skirt out front, the foreman sharpened his crayon and corrected the typos, and understood clearly the need for a prototype 'Primary Trainer 17'. Forthwith he built this, and we know it today as the famous 'Boing (derived from the sound as it bounces) PT-17 Chartreuse Peril'. And that is the inside story of the oily daze of aviation.

As it was such a hysterical success in training surviving pilots in days of yore, we thought it would be nice to develop a similar aerial schooner for new modelers to demolish too. A little of the same flavor of the ancient craft to arouse the spectator to try his luck, so to speak.

Pea-Tea XVI 1/2 - what lofty visions dance in my head. A realistic biplane replica gleaming there in the mud. A taut ship, streamlined drag you might call it. We instructors of modeling know how to fly it, to the youth awaiting it will soon be the 'Orange Peril'.

The fog is lifting - you are standing there, booster and goggles dangling, and a knowledgable air. A look to the sky, and a wet finger hoisted into the wind. It catches pneumonia around the fingernail, yet there is a job to do, men to train.

A typical bunch - peach fuzz all over. Girl crazy! How do I train such specimens. Ship up or shape out you guys, or you will never make the Sky Scratcher's Squadron. What's your name? Bill Summer? Walt Billet? Tame William?

A practiced prime, and a few blades pulled through to distribute the gritty syrup around the inner tolerances, a dash of juice to the old plug up top, and the engine roars to life. The sludge dribbles back as it howls a steady 'plunkety-plunkety-plunkety'. You run to the handle, student at your side. A wave and your off, so light to the touch. In fact the lines are downright limp. It's coming this wa-a-a- my ankle - my ankle!

One by one you teach them the finer points, why you take off downwind now, why they don't straighten the offset, why it's best to flair out before the cement, and which is harder, balsa or granite?

First they can put their sweaty little fist over your hand, get the feel of take-off, straight and level, wing over, back-peddling, and the flair-out and touch-down. Next a flight or two with your hand correcting theirs, and your club will have a highly interested new candidate. Aim him down to the local dealer, and get him started on a super-simple training type. Keep him flying meantime with a profile for solo work, and encourage him along. It's the best answer to finding new Juniors that you will ever run into. It turns a spectator into a participant.

As biplanes go, this one is not tough to build. It is well stressed, nicely bal-anced, and has a solid feel to it in the air. It can be flown with almost any of the larger engines, and you can choose between a .35 and a .60. Enough power to give you plenty of speed, tight lines and a good degree of maneuverability, As a sport type, it builds up far faster than a scale replica, has enough looks to capture the imagination, and is rigged for all but inverted flight. The bellcrank is large with a good throw, and the elevator horn is the same, factors which add up to a gentle train-ing ship which is not too prone to over-control. Slipping the pushrod into a hole closer in on the elevator horn will give you a much more sensitive aircraft for your own use, but when training new flyers at the field, 'tis best not to give them ulcers.

We advise a good smooth engine, one that starts easily, and a loud and clear invitation to anyone interested to try his hand, dual instruction style. Might be a good idea to put your club name on the side of the plane, together with a nearby placard inviting one and all to try a flight. Guaranteed to make good publicity for your group. Also, keep safety conscious at all times. Fly only in reasonable breezes, extra good lines, and explain the need to turn with you, and to back-peddle on command.

An attractive, powerful biplane to whet their appetite, an offer of in-struction, and a follow-up profile train-er to get them over a first solo. It is a project worthy of any club, and one that must be done to keep new flyers in our ranks. We hope you'll give our Primate Raining Zeppelin-1/2 a try." 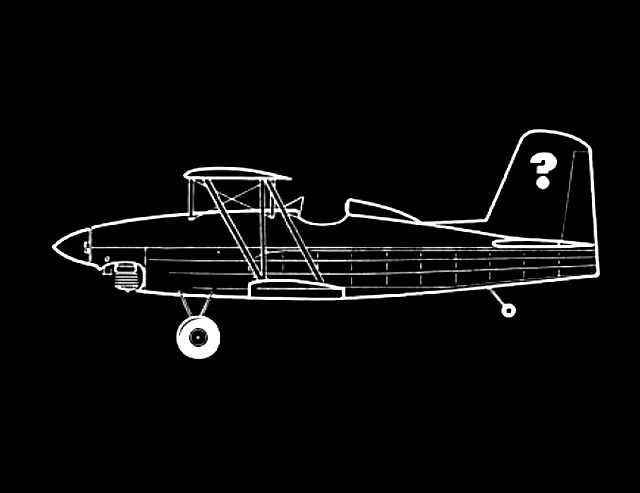