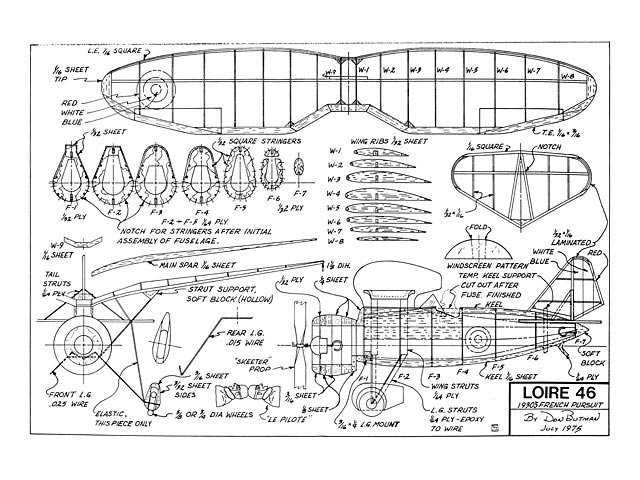 Quote: "Cacahuete is not a variety of sneeze, as you may have thought. It is the French word for 'Peanut', and therefore very appropriate as part of the title for this month's subject.

The graceful gull-wing presented here is the Loire 46, one of the last open cockpit pursuit planes used by the French Air Force. Its slick appearance is due both to the gull-wing design and to the gracefully rounded flying surfaces and fuselage. Just think of a 3/4 or full size (38 foot wingspan) home built of this plane!

Construction differs a bit from the usual in that a 'keel' type fuselage is employed. The use of 1/64 plywood for most of the fuselage formers makes stringer notch cutting easy. However, as indicated on the plan, the 'inbetween' notches may be cut after fuselage assembly. A Dremel or similar tool with a 1/32 thick cutting disk works very well.

The keel pieces are inserted into the former openings and then aligned
over the plan. Three or four 1 inch thick pieces of balsa are used under the keel to raise the formers off the plan. Glue the formers in place, along with the temporary keel support.

The rear motor hook is glued to F-7 at this time. Glue the main stringers in place, notch formers and add the secondary stringers. Note that the top keel piece 'hangs out in the breeze' to provide an opening for
the stab. Add the tail cone, forward 1/32 sheet, and shape the 1/4 inch nose sheet to the fuselage outline. Form the landing gear wires and epoxy in place.

The cowl is shaped from six balsa rings and one plywood ring, glued together. It may be lightened more than shown, but with a balsa thrust button and 'Skeeter' prop, the CG was right on the main spar. No addi-tional weight was required for flying. The wing is built using a piece of composition board shaped to fit the wing spar. This will form the trailing edge to the curve of the spar. The leading edge is soaked with water, formed to this curve and let dry. After building both panels, assemble the wing on a flat surface with 1-1/8 in dihedral under both tips.

Tail surface construction uses laminated pieces for the tips and straight sticks for the remainder. All but two of the struts are 1/64 plywood, in widths as shown. The strut between the middle of the front wing strut and the landing gear at the wheel pant is a piece of elastic (rubber band). This allows the gear to flex without damaging the wing.

Cover the model with tissue, and apply two or three coats of thin nitrate dope. The original model used silver tissue throughout, with the cowl and wheel pants painted red. Paint the struts either silver or light brown. The roundels and tail stripes are cut from tissue and doped in place.

The model was flown with a 6 inch loop of 1/8 flat rubber wound 300-350 turns. Both powered flight and glide are rather fast as compared to other high wing peanuts." 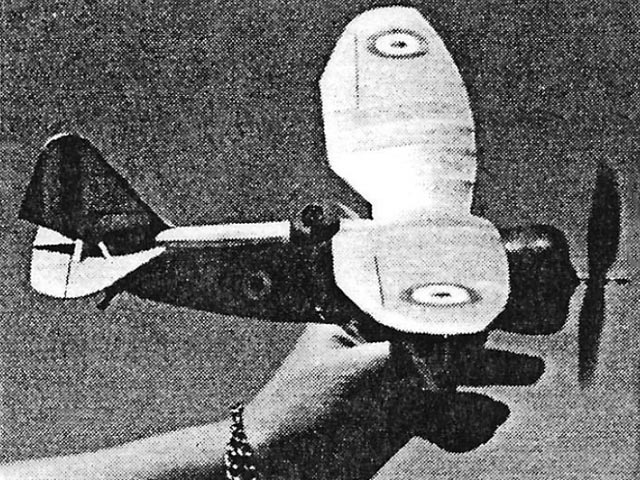