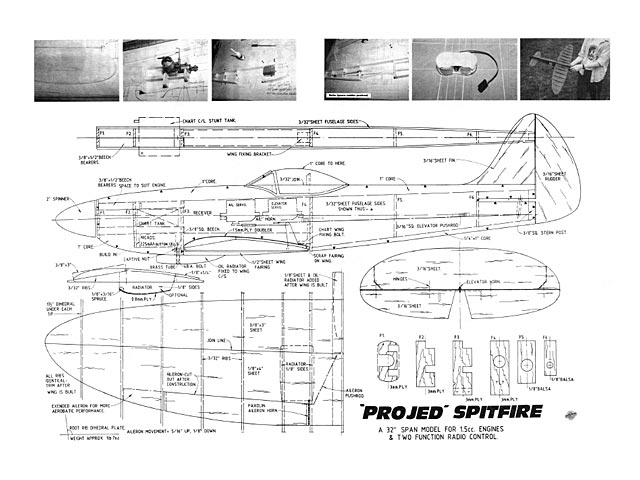 Quote: "Projed Spitfire: David Boddington's Profile/Jedelsky Spitfire to complement the Projed Messerschmitt Bf109E (oz11491) already on Outerzone. Taken from 'Model Pilot' the newsprint format quarterly organ of the short lived 'Model Pilots Association' from some time in the early 90's ('Summer' is the only clue to publication date). Note that the plan was not full size but was supposed to be photocopied at 140% to get full size, so dpi will be inaccurate [edit: the plan is full size now, at 32 in wingspan]."

THE idea for creating the Projed Spitfire and some other models, including a Mustang and Me 109, really belongs to Walter Barlow. At the Model Engineer Exhibition Walter and a colleague had entered some simple sheet R/C models of semi-scale models powered by such engines as the Mills 1.3 cc diesel. Lightweight, with 1/4 in sheet balsa-wood fuselages and the radio equipment all on the outside, the models were not even painted. This excellent concept produces an ultra simple model for fun flying but I wanted to take it one step further and produce a slightly more attractive and scale-like model while still making it quick to build.

Why the name 'Projed'? Well, that is simply a shortening of the leans Profile for the fuselage and Jedelsky for the wing structure. The intention was to have a fuselage thickness just wide enough to house normal servos and receivers, with very little wasted space. With the types of construction envisaged the models could not be too large and the designs were drawn up with the intention of fitting 1.5 cc diesel engines - although a .10 glow engine would also be suitable.

Now for a word of warning. Adam Barringer built the prototype model and, as intended, fitted it with ailerons and elevator control only. Apart from a wing failure (see notes later) the model flew - and still flies - very well. With simple models I prefer to eliminate ailerons and use rudder control if at all possible, ailerons can be a bit of a pain in the bum to install and hinge. So, with a sudden rush of enthusiasm I set out to build a Projed Spitfire using rudder and elevator control.

I said earlier that I wanted to keep the model to a quick-build concept and this has been achieved. To say that the model was started, absolutely from scratch, on the Friday morning and was flown at 4 pm on the following day will give you some idea of the time scale possible. However, I do not recommend rushing the job as much as this, it was only by using the Deluxe Materials fast setting cyanocrylates and epoxies, Modelite filler and Holts cellulose primer and red gloss that such a short construction and finishing time was conceivable.

The conclusion was a total anti-climax. From launch the model turned to the right, gradually increasing the turn, even with left rudder held on, until terra firma was contacted. Now, I might have got away with it if there had been more rudder movement, or if I had included more dihedral on the wings, or if I had spotted a slight wing warp (not so easy to see on an elliptical wing with this construction). However, forget the 'ifs' - and the notion of rudder control - stick to ailerons and you will be OK particularly if you set them with differential control ie plenty of up and very little down.

Cut and stick: Let's start with the wings as this may be the first time you have built a pair of wings using the Jedelsky method of construction. Cut out the ribs (all the same size and pattern) and the 1/8s in sheet rear wing sheeting. From a 3/8 x 3 in sheet of balsa, shape the leading edge section as shown in the photographs. Sand the underside of the rear sheet thoroughly as it is virtually impossible to sand when the wing is completed.

Cut the leading edge sheet to the plan outline and then use the razor saw and sanding bloocks to reshape the tip leading edge curvature to a reasonable aerofoil.

Slightly chamfer the front, joining, edge of the rear sheet so that it fits neatly to the Ye in sheet and glue in position, pinning the sheet to the ribs until it is dry. When both panels are constructed and removed from the building board they can be sanded smooth on top before cutting away, with a razor plane, the underside of the outer ribs and trimming the ribs so that they do not extend beyond the leading and trailing edges.

Do not trim away all the rib undersides otherwise it will weaken the wing, trim the outer ribs to match the depth ratio of the roof rib. Extension of the root ribs, with 3/16 sheet, and additional 1/2 in sheet to the outline of the 'oil radiator' are glued to the centre ribs after the wing panels have been joined. Holes for the wing fixing bolts, sleeving and a small rear fairing (for the rear engine belt fixing) completes the main wing framework.

Cut out the ailerons, gluing the additional aileron ribs in position first, and round off the leading edge. What form of hinge you use is up to you, I opted for 'old fashioned' sewn hinges, Adam went for the new M and M sewn fabric hinge. On Adam's model he wanted the model to look even neater by arranging for internal pushrods for the ailerons, entailing fitting the servo in the wing centre.

Unfortunately this cut away too much of the wing centre section and caused a wing breakage just after a hefty launch. If you do propose to have internal aileron linkages, then you must reinforce the centre joint, either with glass cloth and resin or, as Adam did, by using some dowel reinforcipg 'rods' across the ribs.

Slabsider: Although it is possible to shoe-horn 'standard' size servos and receivers into the 'Spit' you will find it easier to use mini or micro systems. I fitted the inexpensive Hitec 27 togs two function equipment, which, with the mini-servos, makes it easy to install in the one inch wide span. A switch and a charging socket were also installed for external operation, these might be considered luxuries but it does allow the model to be left assembled all the time. The other specialised item I used was a 280 mAh nicad pack from button cells (similar to the old 225 cells but now uprated to 200 mAh) and produced by the Strikelite Company. These have the advantage of flying closely into the one inch space, although I build them in rather than try to make them removable. Details of these nicads can be found at the end of the article.

You must sketch in the installation of the R/C equipment and linkages, also the engine (which will effect the bearer spacing) and the fuel tank. Many of the control line fuel tanks can be adapted for the Projed models, but remember that, if fitted horizontally, you may well not get a full tank run.

Cut the fuselage sides and one inch balsa core, mark the position of the core, formers, bearers and doublers on the port side and glue these items to the side.

Fit the elevator pushrod and nicad battery pack before gluing the second side in position, the supports for the servos should also be fitted to the sides before joining. Remember to screw the rear wing fixing bracket to former F4 and the 3/8 sq beach block and anther nut to F3.

Round off the top and underside edges and cut away for the fuel tank, the engine and the holes for the pushrods and switches. Tail surfaces are from Y. in sheet balsa, taper the trailing edges and round off the leading edge. Because of its wing structure, underside film or 'tex covering is inappropriate. You could use coloured felt pens for a simple colour finish or follow the conventional system of lightweight filler, a primer / filler and spray or brush colour application. Try not to let the weight build up too much at this stage, a cellulose finish is fuel proof for diesel fuel but not for glo-motors.

Test Pilot: Check balance - carefully. My model balanced correctly without any added ballast and the total weight with the mini equipment was 1 lb 5-1/2 oz (Adam's with standard radio was 1 lb 8 oz).

Control surface movements are very much according to the way you like flying, start with those indicated on the plan and work up or down as required.

The Projed Spitfire is in no way twitchy, it goes away from a hand launch quite smoothly and reacts to control inputs in a similar way to larger models. With a 1.49 PAW engine, silenced, it is moderately acrobatic performing loops, rolls and reversals in a manner reminiscent to the full-sized aircraft.

Surprisingly - to me anyway - there is no tendency for it to 'fall out of the sky' when the engine cuts, the glide is quite respectable.

All you need now is an Me109 to fly against. I just so happen to have one drawn up (and a Mustang) so if there is sufficient interest from members we might make the plans available." 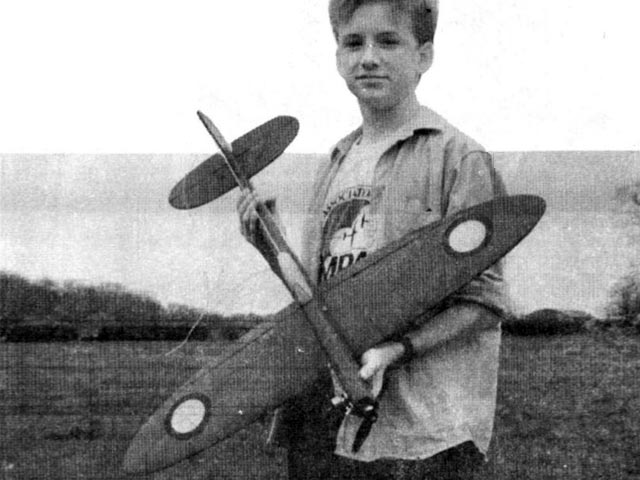 Hi Steve & Mary, Dave Boddington hinted that it might be possible to fly this model without ailerons, but with more dihedral and rudder movement. Over the last year I have built four Depron profile Spitfires in various sizes for indoor flying. None has aileron control and after experimenting with different dihedral angles, I finalized at 10.7 degrees per side. This roughly puts the tips at the same height as the top of the fuselage in front of the windshield. The models are *very* manoeuvrable and I can fly them around me like control line models. Enclosed pics show the source of the data! [more pics 006-008].
Chris Pinn - 29/11/2019
Hi Steve and Mary, this morning we shot a short video showing the manoeuvrability of my 23in Depron Spitfire. The smaller models can turn tighter, of course. This model has 10.7 degrees dihedral on each side. If anyone wants more infomation on these models, including a plan, see this thread on RCGroups:
https://www.rcgroups.com/forums/showthread.php?3371797-A-Universal-Indoor-Profile-Depron-Spitfire#post42412567
Best Regards!
Chris Pinn - 06/12/2019
Add a comment