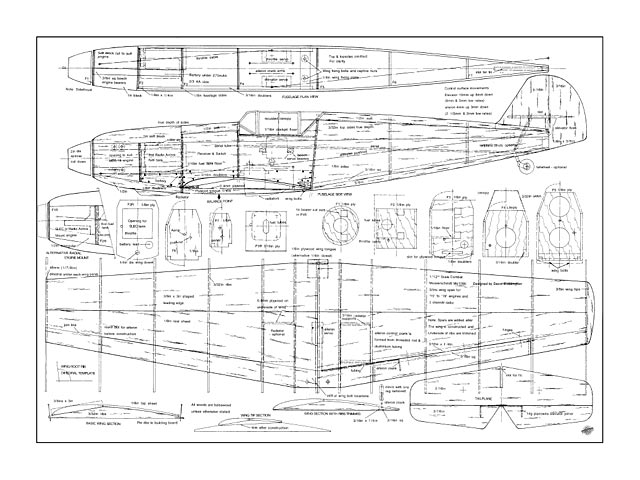 Quote: "Hello Steve, attached are two plans by David Boddington, a Messerschmitt Me109E and a Spitfire XIV (oz11751). Both are 1/12 Scale Combat and a nice match to the D/B Projed Messerschmitt Bf109E (oz11491) as they use the same Jedelsky wing profile and general construction principles [but with a wider, more scale-like fuselage].
The Me109 is 32 in span, for engines 15 to 19. The Spitfire is 34 in span, for engines 15 to 21. Regards,"

Note this Me109E and the Spitfire XIV both appeared in the same article, titled 'Combat Couple'.

Quote: "After painting, the whole airframes were given a coat of Aerocote fuel proofer (gloss and matt mixed together to give an eggshell finish) then the decals were added and they were given a fuelproof protective coat. I'm sure that you can make a better job of a finish, just claim deadlines as my excuse. The Spitfire finished up at just 2 lb AUW, the Me109 a smidgen lighter - not bad considering no great efforts had been made to select the lightest wood, so you should be able to save a couple of ounces if you really tried.

SCRAMBLE! I wonder if Vickers Supermarine or the Messerschmitt company had long waits for suitable test flying weather - and when it was also OK for photography? We got as far as the Friday before I was due off to Filey before the weather gods relented, and then it was a case of test flying four models in one morning. Thank goodness the aviation gods were in a good mood and all four models performed well!

Obviously, the 1/12th scale combat models have to be hand launched and you do need a competent launcher - Ken 'if I can hold it, I can launch it' Swailes, take a bow. Anybody who has flown Club 20 pylon racing models will know the next trick; without any rudder control and with a fair amount of engine torque, the model is going to turn to the left from launch. How pronounced the left hand turn will depend on the particular model, the Mustang (one of Nigel Hawes' designs) and the Spitfire is not too bad, but the Me109, with its small tail surfaces does require most of right aileron held on at the moment of launch, gradually easing it off as the speed increases.

The only other thing to watch at the launch, is if the balance point of the model is forward of the recommended position. Feed in a bit of up elevator when the model is released, to prevent it dropping out excessively - it will fly perfectly well in general flight with a forward C of G and there is plenty of elevator authority for the landing round-out. You will also need a fair amount of down elevator for inverted flight. What are they like with a rearward balance point? - Pass!!

Once airborne, the WW2 fighters are fabulous fun to fly, being highly responsive, very aerobatic and can be slowed without any worries of wing drops, or sudden stalls. In fact, the Mel 09 suffered an engine cut in three occasions on the test flights (my fault, I had allowed dust and dirt to get in the carb during construction) and the glide was incredible, touching down with full 'up' elevator held-on.

Again, giving hands full of up elevator during flight will not faze the models, the looping radius is extremely small and on aileron full rate, the roll rate is rapid indeed. Keeping to the lower rates smoothes out the flying characteristics, but remember that these are intended for combat, so you will need good manoeuvrability - providing that the plane has no bad habits.

With the MDS 18 engines fitted, the performance is sparkling, even low throttle runs were speedy and full bore really tears the sky apart. Speeds will be a little slower with the streamer ribbons attached, but a'15' should also give enough power for good competition flying. With the 2oz fuel tank fitted, the endurance on the MDS 18 is a touch marginal for the seven minutes, so do make sure the tank is full and starting is reliable. Although designed with 1/12th scale Combat in mind, the Spitfire and Me109 make entertaining and economical fun fighters - you could even enter them in the club scale competition if you made a decent job of the finishing.

If I am honest, the maiden flight of a new design is rarely enjoyable; more of a relief when it all goes well and you know that there are no major changes to be made. With this combat couple, the first few seconds were 'hold-your breath' time but, after one circuit, it was - where's the enemy, let me get on his tail. We can't wait for the first Combat competition, why not build a model or two and join us!" 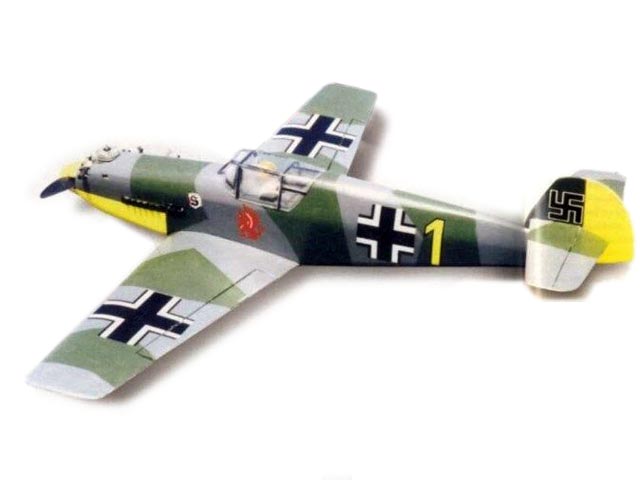