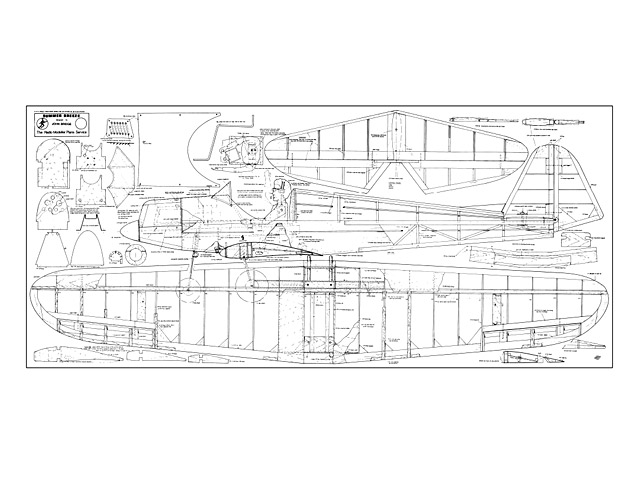 Quote: "Summer Breeze was designed to be a crowd-puller! Intended for the pilot who has passed through the basic and intermediate trainer stage, it has the popular appeal of a scale model but none of the demands (ie scale size wheels, finishes, tail surface areas, etc) that would make it unsuitable for the sport modeller flying from small, rough fields.

The prototype is powered by an OS 60 Four Stroke, which adds a great deal to the atmosphere of the design and is perfectly suited to it's character. Any motor larger than or including a .40 will be suitable if a 60 four stroke is not available, but you may find that a certain amount of nose weight will be required to make up the difference in physical size.

Construction: Fuselage: The two basic side frames are made up first, building them up simultaneously over the plan in the time honoured manner. The two frames are built one over the other over the plan, making the longerons follow the same line and cutting the vertical spacers at the same time and gluing them in place together. Remove from the board, separate the two sides and add the doublers and hardwood engine bearers. Now the main formers may be added, ensuring the structure is square before leaving it to dry.

Next stage is to pull in the sides at the tail and fit the remaining parts of the fuselage structure; first the horizontal spacers and former F5, followed by the decking longerons and stringers.

Wings: All the ribs may be formed by the sandwich method by first cutting out R1 from 3/16in. ply and R10 from 1/8in. balsa and 'sandwiching' nine layers of balsa between them (noting the thickness of the wood according to the rib that will be formed). This sandwich may be held together in a vice or by passing long bolts through the pack, and then all that the builder has to do is use a razor plane and sanding block to shape the pack of ribs to the shape indicated by the template ribs R1 and R10. Cut out the spar slots, separate the sandwich and cut out the holes for the aileron linkage.

Assembling the wing follows the usual pattern. Lay down the lower spar, fit the ribs and then the top spar. Attach the leading and trailing edges, cut away the aileron section from the ribs and fit the inset trailing edge. Spar webs and tips may then be fitted and next the wings joined with the dihedral, leading and trailing edge braces. Finally, the undercarriage blocks, block brace and ribs R1 are added. The wing may now be offered up to the fuselage and the wing fixings built in. The ailerons and their linkages should be sorted out before the wings are sheeted with 1 mm plywood over the leading edge and the lmrn ply cap strips are fitted.

Tail assembly: All the tail surfaces are built over the plan. The fin is assembled from 1/2 in sheet for the base rib, tip, leading edge and fin post. With the outline of the fin laid down over the plan the intermediate ribs may be fitted. After lifting the fin from the board it may be sanded to a symmetrical section, thinning the thick-ness down towards the tip... " 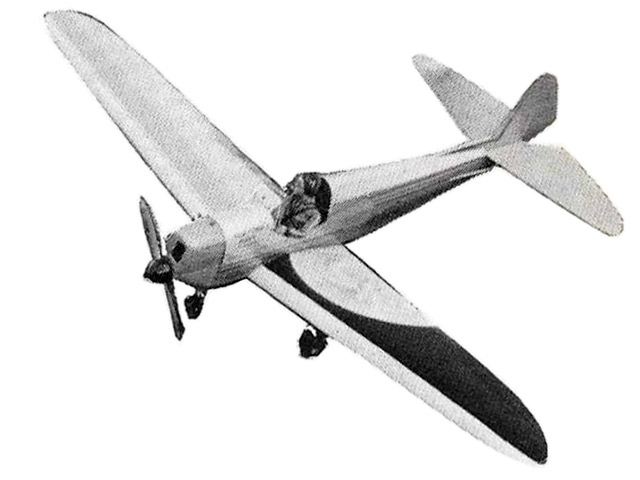