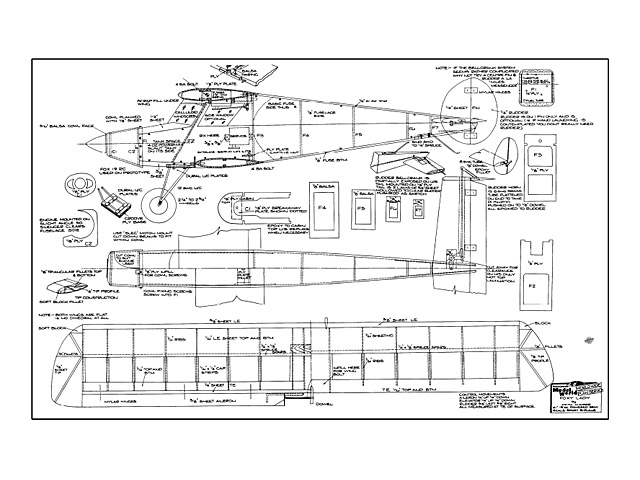 Two objectives were held in mind as I Foxy Lady was designed - first I wanted a simple to build sports bipe with a different appearance and secondly it was to be suitable for scaling up and down to suit engine sizes from .15 two stroke to .90 four stroke. An option appeared during construction, that of introducing a gull form to the upper wing (a la Cobra racer) to reduce interference drag between the wings. On the smaller versions the wing spacing remains the same, which seems to help with the sharp stall into various manoeuvres such as flick rolls and spins.

A Fox .19 (hence the name) more than adequately powers the subject of the plan, in fact it flies like a much larger model with a sparkling aerobatic performance. Most members of the local model flying club have had 'hands on' experience of Foxy Lady and all felt quite comfortable with her characteristics directly upon taking over the transmitter. Surely a good recommen-dation for such a model.

As an added bonus the Foxy Lady to this size will fit fully assembled into most cars. Constructionally the lack of struts makes special jigs etc superfluous, she is rigged zero-zero, unusual for bipes but it works on the Foxy Lady. The twin fins are a cosmetic touch and only one rudder is hooked up to simplify construction. Two could be linked up, alternatively if you want to avoid the bellcranks, et al, another fin could be fitted in the centre like the Miles Messenger.

Construction: I usually start with the wings, to at least get them out of the way. The ribs are cut from 1/16 sheet and then framed up over the spruce main spars. Leading and trailing edges are then cut out from 3/8 med sheet except for the built up lower wing trailing edge, then the ply reinforcing plates at the centre section are fixed in place. Next the upper leading edge sheeting is added and the cap strips applied to the ribs of the spar. The tips are made up with radial ribs shaped in situ.

Ailerons are cut from soft 3/sin. sheet shaped to section and then readied for fitting. The aileron horn is epoxied into place and then the hinges prepared. Split cane or similar is mounted onto a shaped block... " 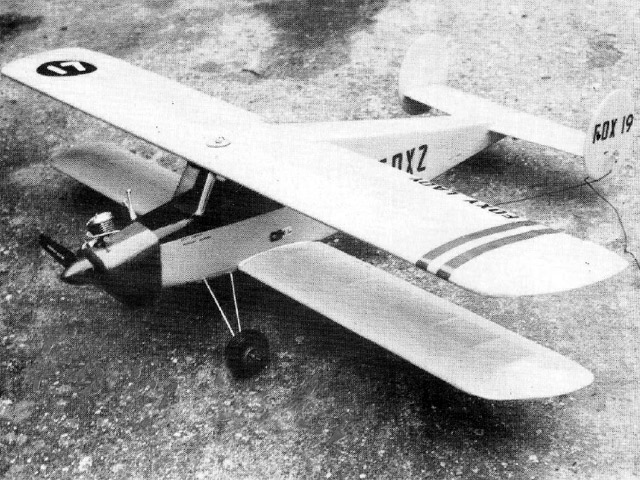