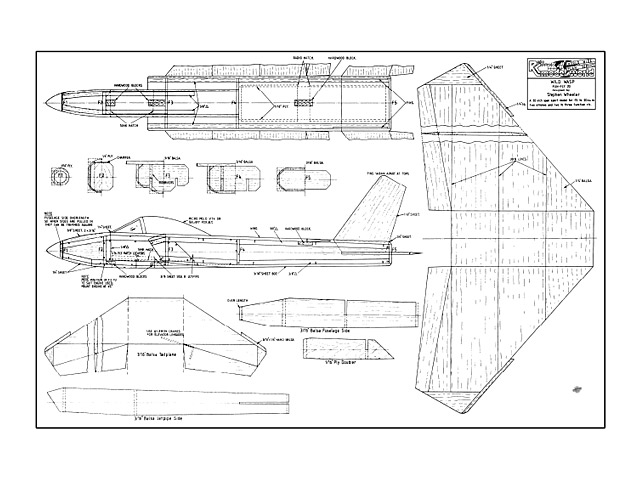 Although this model may give the impression of being rather complex, it is in fact remarkably straightforward, albeit unconventional in construction. There are one or two points which are worth mentioning particularly, such as the leading edges on the wings and the arrangement of the swept-back elevator torque rods, but there is nothing which should be beyond the powers of anyone who has already built a couple of aeroplanes from kits.

The model is constructed almost entirely from balsa sheet, so there are no fiddly wing ribs to cut out or smelly foam to cut! This also helps enormously in minimising building time of course, to the extent that the prototype took only 14 days to build from start to finish.

Wings: The wings are constructed from four inch width balsa sheet over the plan (both wings together of course!) the sheets being simply butt-joined together. They are made from 1/4 inch sheet, although 3/16 may be used for the trailing edge section if you find yourself running short of 1/4 in, and do not mind the extra work of sanding smooth the join. Include the ailerons - they will be cut out later.

After adding the leading edge extension and tips, sand the entire wing to section up to the point where it joins the fuselage. Now cut out the ailerons, extending the inboard cuts to the points where the torque rods emerge from the centre of the wing. After installation of the torque rods and tubes, fill in with scrap above and below them and sand smooth.

Make up the tailplane in the same way as the wing, but from 3/16 sheet and with the torque rods emerging from the top. Fix the ball and socket joints to the torque rods at this stage.

Fuselage: Before commencing to cut out the sides check that there will be sufficient depth in the aft fuselage for your servos (including the arms!). Sanwa 431 type were used in the prototypes. If not, simply deepen the rear sides and former F5 to suit. Do not alter the tailplane/wing incidence.

The fuselage is constructed using the egg-box method, with F3 and F4 interlocking with the fuselage sides, as will be seen from the plan. Start by adding the doublers, then assemble the fuselage sides to F3 and F4 over the plan. Do not add F5 yet. The position of F2 will depend upon the length of the engine to be used; so do a trial mounting of the engine, at a 453 angle, onto F2 now. Working back from the F1 position, mark the location of F2 onto the sides. Mark the throttle cable and fuel/pressure holes onto F2, remove the engine and drill. Glue F2 into position with no side or down-thrust.

When the glue is completely dry, thoroughly dampen the exterior of the fuselage forward of F2. Pull in the sides at the Fl position with rubber bands until the width matches F1. When dry remove the bands, sand the front square and add Fl. Glue in 3/8 triangular strip behind F2, along the top and bottom of each side of the forward fuselage sides and at the top... " 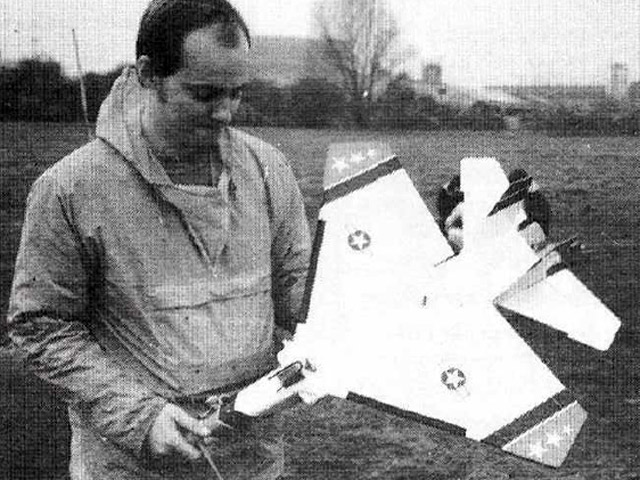