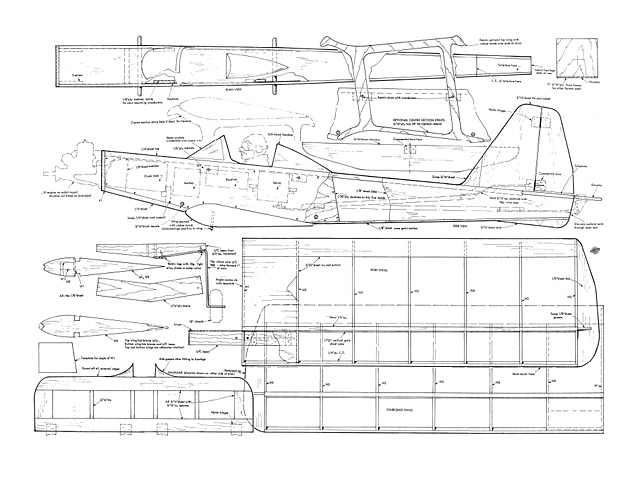 Quote: "A mystery for Outerzone visitors to solve! I've called it 'Mystery Bipe' because the plan, though obviously a magazine free plan from the 1980s era, carries no model name, designer accreditation or publisher! Given to me as part of a stack of free plans minus their source magazines back in the '80s it's been a mystery to me for more then 30 years! Perhaps someone out there will recognize it [edit: fixed now]... As a truly simple and rugged biplane model that would take a modern out-runner easily I think it's worth saving for posterity!"

THE IDEA for this model came about one day last year when I was attempting to sort the good bits from the rubbish in my workshop. Among the 'Good grief I had forgotten where that was!' I found an OS10FSR, an RCM&E receiver and two servos. Rather than let them sink out of sight again I was determined to do something with them. After a deal of doodling I came up with a handy little low-wing monoplane which can quickly be turned into a fun flying biplane.

Construction: 'Keep it simple and light' was my motto and even though there appears to be more spaces than woodwork in both the wing and fuselage I would not think it possible to break anything in flight.

The Fuselage: The width and depth was governed by the size of my servos and one of the rather nice rectangular Slec tanks. Cut the sides from evenly matched yein sheet and the doublers from 1/32 ply. Before gluing the doublers to the sides, I cut slots in them to correspond with the ends of the servo rails, an assembly which when fitted together gives a very positive fixing and the rails act as a former in the centre of the fuselage.

Assembly of the six fuselage components is simplicity itself. Build this upside down over the plan, the sides are glued to the top deck and the servo rails fitted. The front former. pre-drilled for fuel lines, is epoxied in place followed by the 1/4 in sheet under the tank. Finally, the cross grain 1/8 sheet is fitted to the rear of the fuselage. A tip here, in order to keep the sides perpendicular toward the tail, is to cut a false former the size of the opening at the rear of the fuselage and tack glue it in place while the rear sheeting is setting. This can later be knocked out to make way for the elevator push-rod.

Wings: Again, simplicity is the keynote. There are only two sizes of rib, the centre section being sheeted. The ribs are symmetrical and to ease building are flat from the rear of the spars on both top and bottom.

Build each half of the wings separately setting up the root ribs to the angle dictated by the template. The strength of the wing lies in 1/16 in vertical grain balsa glued between the spars which should also be a good fit between the ribs. If any gaps show around these webs discard the piece and cut another. The wing halves are joined with a 1/16 ply dihedral brace and in the case of the lower wing with the undercarriage block as well. The centre section ribs need to be cut away to fit around this. Wing-tips are 1/8 sheet braced on both sides with triangular sheet off-cuts. Finally, blunt the leading edge of the wing with a few strokes of a razor plane and a light sanding.

Tailplane Fin and Rudder: Try to use light but stiff balsa and build up the tailplane over the plan. The fin is all sheet and is glued vertically into a slot cut into the fuselage top deck. Central surfaces are also cut from sheet material and hinged to the tailplane and fin. The method of hinging can be by mylar strip, leaf and pin, or in the case of the elevator by a continuous Solarfilm strip.

There now remains a thing between the wings: I suppose a proper name for it is top wing support. The credit for building this out of ply must go to Don Dewey who designed the Wayfarer (oz5908) biplane - I built one two years ago and am still flying it. Cut two supports making sure they conform exactly to the plan in shape. The ply used should have at least five laminations for rigidity. Avoid, like the plague, three ply, particularly the sort that has a core of a consistency akin to 'Weetabix'. If 'Double-Up' is used as a biplane the supports are fitted to the outside of the fuselage, held by screws into scrap ply at the top, and prevented from flapping about at the bottom by the lower wing retaining bands.

Radio and Finishing: If you have fitted the servos where I have then the only place left for the battery and receiver is between them and at the rear of the tank. Battery nearest the tank.

In order to keep the weight down I covered my model in Solarfilm. Before anybody says this adds no strength to the model, particularly the wings, I can only say nothing I have done to the model while flying has caused a failure. The wing I stood on accidentally is another story.

Flying: Performance, as might be expected, is different in the two configurations. As a low-wing monoplane it is quite quick and for a small model appears very smooth through the manoeuvres. Rolls are fairly straight for a rudder/elevator model.

As a biplane, the speed goes down, the lift goes up, a fair amount of down trim being required to kill this. The model can be made to wheel and whirl in the manner of a WWI fighter.

On most grass fields the wheels fitted to the low-wing are too small so I suggest, in the mono wing version, the top wing is fitted under fuselage and hand-launches are used. As a biplane it looks odd without wheels.

Finally, as I write this it has occurred to me that maybe I have got the name wrong. It should be possible, I think, to fly it as a parasol wing monoplane as a third alternative. So 'Trio' or 'Triplet' maybe - I leave that to you!" 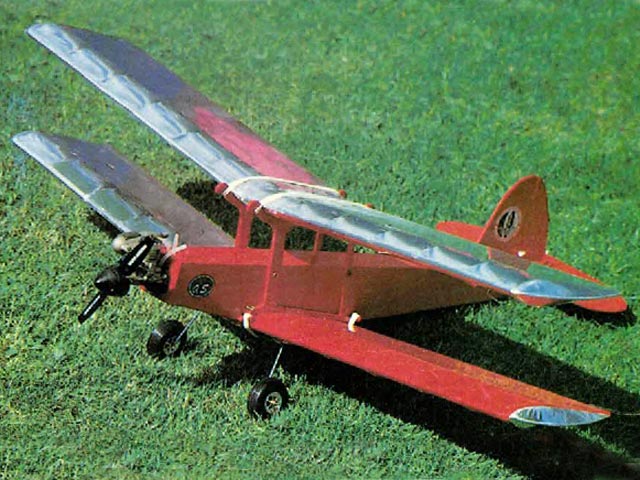 I'm pretty sure that you will have more feedback than this one but after seeing the plan listed this morning as 'a mystery ship' prompted me to check a plan I bought some time ago, it's called 'Double Up' and is shown as being designed by Alec Barber and seems to be identical!
JWaters - 22/11/2019
Outstanding, that was very fast! Thanks to KLH, JWaters and Pit, have confirmed the ID of this one now.
SteveWMD - 22/11/2019
Thank you Outerzone and KLH for solving this 30 year old mystery for me!
RMC - 22/11/2019
Add a comment