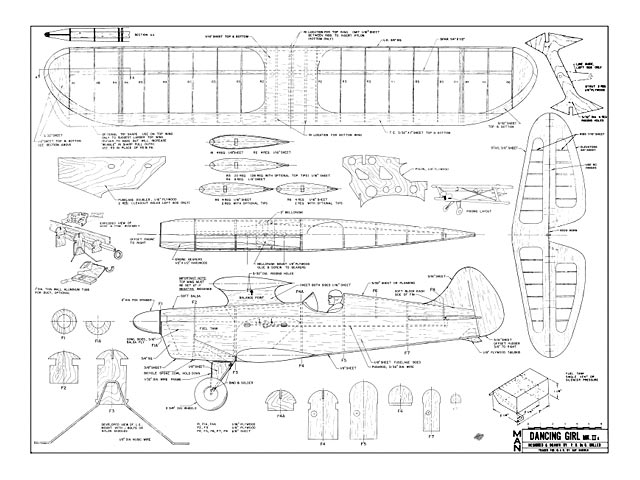 Quote: "Hi, I've inherited a lot of modelling stuff from my father, who is in the process of moving to a smaller house. Among it all was a full-size plan for a 'Dancing Girl' - a biplane, and not the Dancing Girl in your files."

Note this plan could use some more cleanup. I spent a long time cleaning and getting the centre section fixed up, but the further out to the RH edge you get, the harder it is the read the scan. If anyone wants to jump in and have a go at this, by all means. We have raw scan and WIP PSD files here, for the asking. Large files, so we'd need to use wetransfer or something. But in many ways the best solution is maybe just wait for another, clearer, scan to come along. Steve [note: This is fixed now, thanks to Gene]

Quote: "A 40-powered stunt biplane that can do all, plus a little bit more, is eye catcher at any flying field, cheaper to build than many small planes, easy to transport and will stop any show. Dancing Girl, by Peter Dominic Miller.

Consider the following: A 40-powered stunt ship that will fly the book and then some, that costs less to build than most models half the size, that can be transported fully assembled even in the back of a compact, that looks different and is guaranteed to stop the show when flown properly. Like the specifications? Well, here is Dancing Girl.

Dancing Girl has a very long family tree which dates back to 1961. At that time I was serving with the Royal Air Force in Aden, where we had a very active model club. I built a stunt biplane there, which was reasonably aerobatic, had some of the most peculiar characteristics: it was very sensitive, and it tended to float in on the lines. In short, it was hardly inspiring, but the biplane bug had bitten (warning, the biplane habit is addictive). Several more biplanes followed but to be honest, their stunt performance and stability were still poor, to say the least.

Then I found an old magazine with Harold deBolt's Bipe (oz10715) in it. This featured 1° negative incidence on the top wing so I tried it, and the stability problem vanished like the ugly grease stain under the latest laundry detergent (OK, so you don't believe the commercials, but you can believe me.) This latest modification did nothing for the aerobatics though, and a re-think was called for. Up until this stage I had followed all the normal trends with model biplanes, and I realized that they all used thin wing sections, in some kits going as low as 10% which is equal to a flat plate section in the chords that we are using. But we all know that the normal stunter uses up to 18%, so I thought, Hang the expense, buy the cat a goldfish, and tried 18% sections. Instant success, Cavalier (oz4587) flew the full schedule. My club, the Sudbury Model Flying Club, built 15 Cavaliers, and while slight structural modifications were made, no aerodynamic mods were ever needed. This design was sold to a kit manufacturer and will be in production soon.

While the club members were busy building and flying Cavaliers, I built some semi-scale biplanes and one scale biplane, the Bird Model A to be precise, and from these I learned several vital facts: First, that finding the perfect proportions with Cavalier had been pure luck; second, that I now had a set of proportions that would give a full stunt bipe every time.

Let's take a look at these vital points. The wing section and incidence have already been mentioned. Due to the fact that the wings are widely separated their size has a greater effect on the center of drag if they are of different sizes. The Bird Model A is almost a sesquiplane (ie, the top wing is nearly twice the size of the lower wing). This model would loop really well but would not bunt properly, more of a wing over in fact if slack lines were to be avoided. The same symptom showed itself when a standard Cavalier was fitted with an upright engine which had lowered thrust line, and again on a semiscale SE5a with dihedral.

The elevators were large, and the range of movement was 45° each way. This feature has been retained because the stunt biplane has a party piece that is unique. Do a loop pulling out at about 15 ft, but instead of pulling out, slam on full up. The model will loop in its own length. This is known as the 'Twiddle.' If after a Twiddle, you allow the model to continue until it is pointing vertically up and then neutralize the controls, she will hover or slowly climb away remaining under full control all the time. Fit throttle control and you can do the Saber Dance. Smaller elevators have been fitted and the model will still stunt, but the Twiddle is lost.

Returning to the 15 Cavaliers built by my club, get several people to build the same model, and you will get that number of models with different weights. The results proved that for ideal performance, lightweight is important. A wing loading of 10 oz per sq ft is the target to aim for, though some in-crease is permissable.

By now I felt that I was really getting somewhere. I had an article on biplane stunters and a design for the Duchess (oz3762) published in a British magazine. In this article I stated that I did not think that a biplane could ever compete with the normal contest stunter.

After I had written this I began to wonder why not, so I set out to design Dancing Girl (bet you wondered when I was going to get around to her). The design session started with several hours of contemplation and the study of movies taken of various biplanes. Two facts were noticed: Frame by frame examination showed that what I thought was a good square corner was far from it except on one model, and this model had the spar buried in the wing so that the section from leading edge to trailing edge was perfectly smooth; the other point that I could see was a lack of smoothness in the flight pattern which I felt might be cured with a longer moment arm on the tail.

I then considered the possibility of using flaps, and a friend agreed to fit them to the lower wing on an old Cavalier. The result was horrible; all the performance was lost - so that answered that question.

The result of all the foregoing is a state-of-the-art biplane stunter that is pure joy to fly. The first flights indicated that I had achieved my objectives, and that in the right hands, Dancing Girl would not disgrace herself in the contest circle. I say the right hands because I shall never find enough time to practice. I read of stunt flyers spending 20 hours a week practicing, and I am lucky if I get in six flights a week.

The handling characteristics of biplanes are surprisingly different from normal monoplanes. It is almost impossible to describe it in words, but once you get used to it there is nothing like it. Every person who has ever flown one of my designs has liked it and very soon was doing Twiddles and hovering. One of the benefits of the biplane is the relatively low speed at which it stunts. This gives the pilot more time to think, and should he make a mistake, the crash is normally at low speed with consequently little damage. Biplane pilots become more and more confident that they can get away with anything, and they usually do. Crashes are rarely due to the model's inability to do what the pilot asks; this is particularly so with Dancing Girl, but they are more often caused by over-confidence in the pilot.

Dancing Girl is the result of lots of trial and error so please do not modify anything, or if you do, don't start moaning that it doesn't fly so well. Now, let's get down to some building. If you have built a stunt job before, you will have no problems with this one.

Start by cutting out F-2 and F-3 and the pylon from 1/8 plywood. Fit the undercarriage, (sorry, landing gear) to F-3 and assemble F-2, F-3 and pylon to the bearers. Fit bellcrank mount and then fit the bellcrank with leadouts and push rod. Use epoxy for all joints in this area..."

Quote: "Hi Steve and Mary, Here is a restored file for The Dancing Girl. The scan that you have is from an original full size drawing. The magazine drawing was was not as condensed. The magazine staff rearrange the original drawing so that it would print on a standard 36 in wide copier. I used my magazine scan to fill in the missing information after cleaning the original. The restored drawing as is, is not ideal but can be built from. I could not do much of anything to achieve a better title block. The scale factor of about 5 to achieve full scale from the magazine resulted in heavier line weights. Gene" 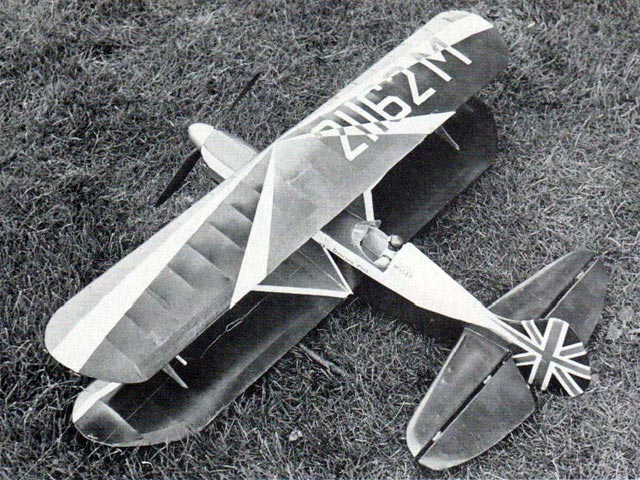