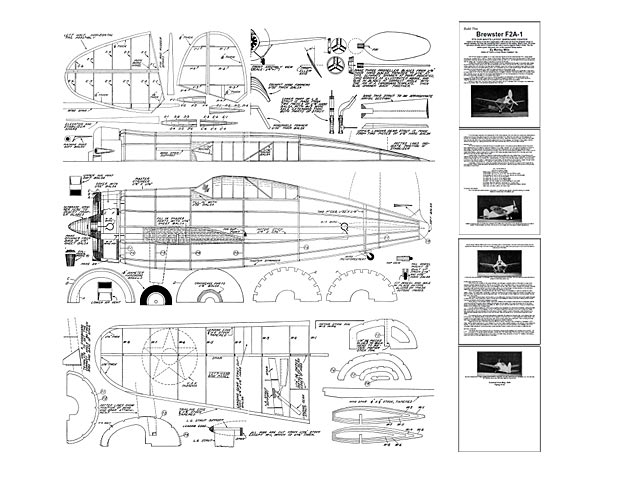 Quote: "One of the newest and fastest of US Navy shipboard fighters is the all-metal Brewster F2A-1 single-seater mid-wing job, powered with a 1,000 hp Wright Cyclone engine. While exact performance figures remain a military secret, experienced observers declare that the ship's top speed is well over 350 mph and the take-off time is only six seconds with full military load. The service ceiling is reported to be above 30,000 feet.

Outstanding constructional features of the Brewster include a retractable landing gear of unusually clean design and an extra large cockpit canopy which affords remarkably good vision both fore and aft. One of the most attractive military planes ever built, the lines of its deep stubby fuselage, huge motor cowling, and tapered wings create a promise of ace performance and formidable striking power. And considered from the model builder's angle, its clean lines, ample wing area, and big three-bladed prop make it an ideal prototype for a flying scale model.

The author's model is a steady and consistent flyer, showing remarkable stability and ruggedness. It was built to an exact scale of 3/4" to the foot, the only changes being an increase in dihedral, horizontal tail area, and propeller blade area. However, as you can see from the photos, these alterations don't mar the appearance of the ship in the slightest, and they're absolutely necessary in a successful flying replica. In order to keep the weight to a minimum, the landing gear is not retractable, so the wheel wells in the fuselage are omitted since they'd cause quite a bit of drag and increase the weight, too. In other words, this job is designed especially for topnotch flights, and it's advisable to keep the weight as low as possible..." 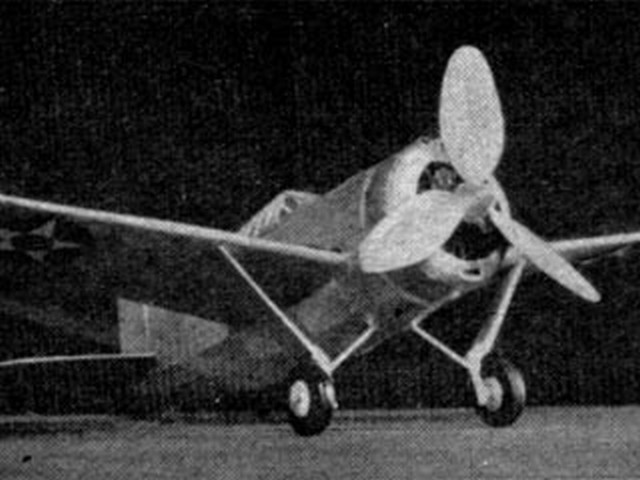