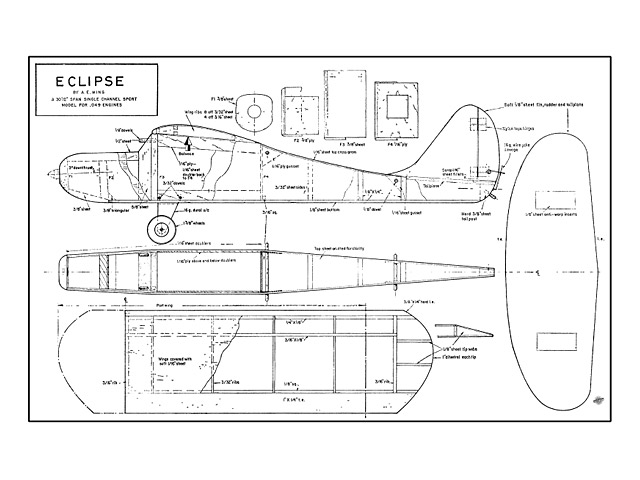 SEEMINGLY UNLIKE most other modellers who write about their designs, I'm not able to report that this model flew 'straight off the board.' In fact, several alterations had to be made before an efficient model was developed. I hope that this will encourage the prospective builder, rather than put him off - because I'm a firm believer myself in the 'Never buy the Mk I' axiom. The final version, shown here, is a very suitable aeroplane for the beginner to single-surface flying, and adequate power is to be found in any of the .049 engines available - such as the Cox QZ, Babe Bee or Golden Bee, or the Enya .049 or McCoy .049. Anything with more oomph than these motors will produce a very acrobatic, and touchy machine, not recommended unless you are very expert or want a short modelling career.

The radio compartment, while not exactly vast, is quite adequate for today's miniature superregen receivers, and most of the superhet ones, too. Recommended escapement of the bang-bang type - either a Conquest or the Futaba rubber driven escapement - as these require less room than the compound types, and are also lighter. I suppose one could fly it with one channel of proportional, but don't blame me if it turns out on the heavy side, as I have only flown with escapements!

This is a really sweet little ship - and I'm sure you will agree with me when you have flown her. C'mon then, let's get the building board out.

CONSTRUCTION: For most modellers, the idea of requiring instruction on building such a simple little machine will be superfluous, to say the least, but for newcomers (and, let's be thankful, they are always with us) here are a few tips:

Wings: These are built on a dihedral board - a couple of pieces a flat board hinged in the middle so that they can be set at the appropriate dihedral angle for the wings. Select light to medium straight-grained sheet balsa, 1/16 and 4 inches wide. Cut this to the required length and width and pin it to LE and TE) are butt-joined. The bottom spar is next positioned, followed by all the wing ribs. Scrap pieces of 1/8 sq are then glued between the ribs and the trailing edge, and likewise pieces of 1/4 x -1/8 in strip between the ribs and the LE. This makes a very strong wing and saves notching the LE and TE to take the ribs - a job that is fiddly and one that I hate doing!

Glue the top spar and the tip gussets in place, and then the top sheeting is added. Finally apply some fibreglass matting and resin to the centre section, as no braces are used.

Fuselage: Cut the sides and doublers, and glue the latter in position. Join the sides together with formers F3 and F4, checking with a set-square, to make certain that you have left it so that it will (set square!). When dry, add the tail post, pulling in the sides, making sure they bend equally at the F4 position. (This is where the selection of your timber shows up!). Now pull in the front sides, fitting the nose former, Fr, to give the correct plan view. Next glue in position the plywood strengtheners for the undercarriage (U/C) and wing dowels. The top and bottom sheeting is added next - the grain of the 1/16 top sheeting being across the fuselage, and that of the 1/8 sheet bottom, along the fuselage. Finally add the nose blocks and open them out as required to suit your particular engine and tank..." 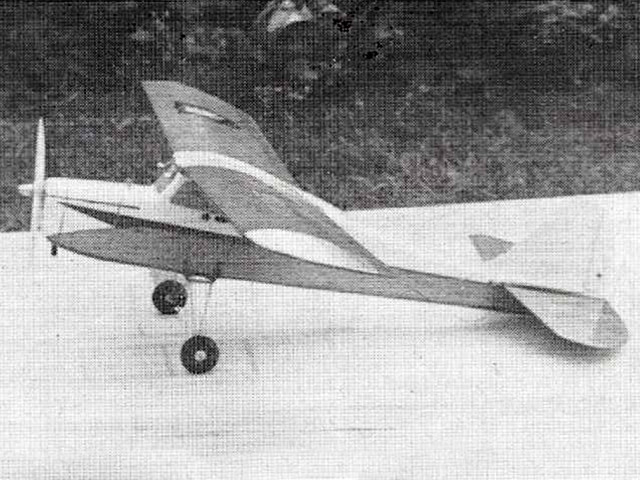