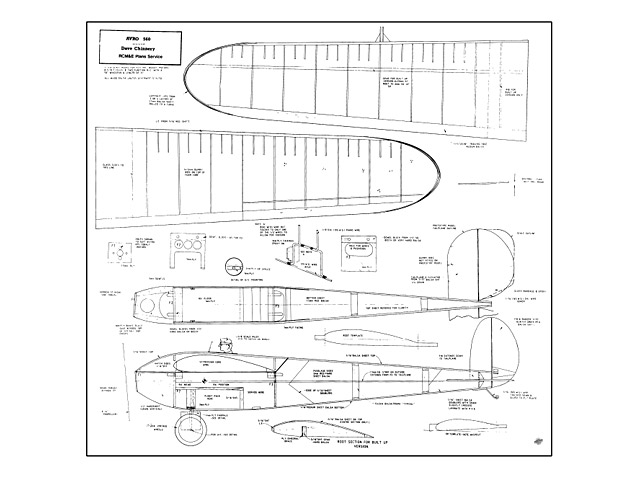 Quote: "Build Dave Chinery's electric ultralight for up to 540 motors and get thermalling!

I have long admired the clean, efficient looking lines of the Avro 560 - ever since I found a plan of it during the 1960s and made a free-flight model that flew very well. After my son Mark had learned to fly, using my Heinrich (oz11725) he decided he wanted a scale model and the idea of a new electric model of the 560 fitted the bill perfectly.

My original plan having been lost in the mists of time, we found another one in the pages of the excellent book 'Ultralights' by Richard Riding, published by Patrick Stephens Ltd. This gave ample detail to draw up a plan, so we started to consider the design. Although a basically simple shape, the layout of the subject required a little care to model in a practical manner.

The wing position meant that there was a choice between having them plug on glider-style or having them strap on with a fairing over the top. Since the latter would be more forgiving in the event of an untidy landing, and would give better access to the inside of the fuselage, we chose that method.

The short nose gave us little option on possible positions for the main nicad pack, so we chose to feed it in under the motor as shown on the plan, in line with my preference to have the battery sitting on top of the landing gear! The latter was initially bolted to the ply bottom of the nicad compartment. Experience showed that it was not sufficiently resilient in this form, tearing the bolts out of the thin ply, so the arrangement was changed to that shown on the plan, which is a good deal more robust and springy.

Simple but effective: As intended, the model was mostly constructed by Mark, who was only ten at the time! Although very simple to do, we omitted the fine details like the false wing ribs and the pitot head, however these are shown on the plan. After covering with silver Solarfilm an Astro .035 Cobalt motor was installed together with standard (not lightweight) radio gear including a servo driving a motor switch. All-up weight was just under three pounds (1.3 kg) with a five-cell pack of Sanyo reds.

The model flew very well from the start, doing eleven minutes on its second flight, although seriously under pitched with a 6 x 3 prop. The sparless blue-foam wing was easily man enough for the job, even though flown by Mark at very unscale high speeds on occasions, and even looped! Although the area of the tail surfaces is quite small, no problems were found with stability, although the model would drop a wing if provoked. Extra washout has been added to the plan to help avoid this.

Mark flew the model quite a lot, even winning a 'pot' at one of the Old Warden Golden Era days, and eventually he moved on to faster and more aerobatic models.

Although we used more a expensive Cobalt motor, the model will fly happily on a reasonable buggy motor. This will have similar power, although it will be bigger, heavier, and less efficient. The weight will come in handy in the short nose, and the efficiency of the model itself will still turn in a reasonable flight performance.

To construct one Avro: As stated above, the model was designed to be built (with a little help) by a ten-year-old, so it is quite simple. The original model was controlled by rudder/elevator/switch, but it would be possible to fit operating ailerons if you wish. This would allow the dihedral to be reduced to a scale amount. Due to the high aspect ratio you will still need rudder control to coordinate turns, so you will need at least 4-channel radio.

The wings are made by my usual blue-foam method, although an alternative built-up construction is suggested on the plan. The foam method is simplicity itself, and was described in considerable detail in a series of RCM+E articles during 1988. For the benefit of those unable to read these, the method is as follows:

Trace out the templates shown onto a piece of scrap Formica or other heat-resisting material and cut them out - ply will do, but make sure the edges are really smooth. Mark the datum lines clearly as shown to get the right washout - this is important - see above! If you are using the built-up construction option, you can use the templates to make the ribs using the sandwich method.

Cut the Styrofoam blanks to the exact planform required (without rounding off the tips) with the right taper at the LE and TE. Pin the templates to the correct ends of the blanks; you should find that the rectangular tabs on the ends of the templates protrude past the edges of the blank to lead in the cutting wire. The templates should have their datum lines parallel to the flat top and bottom of the foam slab to give the correct washout.

Rest the blank on a firm, dead flat surface (chipboard will do) and weigh down evenly across the top. I use metal plates, but books are OK. Cut the foam blank in the usual way, being careful to move the wire across each end in proportion to the chord, so that each end finishes simultaneously. I usually start at the TE, as any wire drag will be less important at the thicker LE. Add the templates to the other blank and cut the other wing, making sure its the opposite hand to the first one!

Before rounding-off the tips, add the balsa LE and TE strips using PVA, and allow to dry. When dry, round off the foam at the tips, leaving the edge vertical for the moment. Cut a number of 2mm sheet strips about 1cm wide at one end and 6mm at the other, and long enough to go round the foam tip from the LE to the TE. On a firm surface, roll these strips out lengthwise, rolling-pin fashion so that they curl up. This will make the next stage easier..." 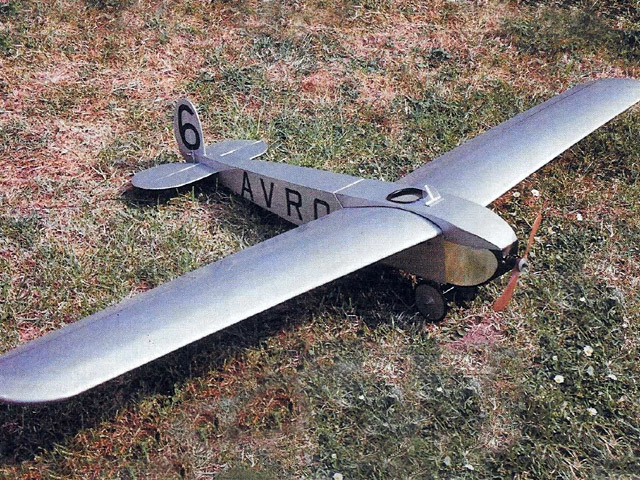