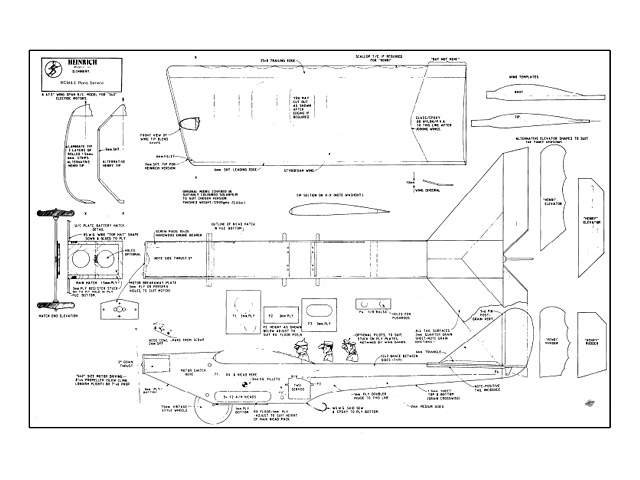 HEINRICH WAS the result of burgeoning interest in model flying on the part of my eldest son Paul. Then about eleven years old, he had accumulated enough stick time on my old Super Sprite (an Argus plan) thermal soarer to go solo. Having overcome this hurdle, he was keen to fly electric, like Dad, so he asked me to make him a trainer.

To ensure that his involvement was more than just as a flying pupil and to give him a closer insight into the skill and effort needed to build a model, I resolved to design one suitable for him to do most of the building, with just a little help from Dad on the tricky bits!

The original sketch was done on the proverbial back of an envelope, adopting the successful four feet span, buggy motor-powered shoulder-wing layout. To stimulate interest, the basic shape was styled to simulate an early WWI scout. This artwork having received the approval of the 'customer', the plan was drawn up keeping in mind construction mostly by an eleven-year-old.

Construction progressed slowly, with Paul doing a lot of the work, including cutting the wing cores (under supervision), With the model about half-finished and Paul a year older, he discovered girls and cast away childish things like model aeroplanes! Having more than enough electric models already, I stored the unfinished model away.

Number two son, Mark, is four years younger than Paul and asked me to teach him to fly when he was eight! He soon became quite a good pilot on the old 'Super Sprite', gaining his 'Silver' at age nine and occasionally beating me in thermal comps - but that's another story!

The inevitable request for an electric model reminded me of the unfinished `Heinrich', which was duly dug out. After negotiations with the 'previous owner' and money changing hands(!), construction was resumed by Mark, who did the covering almost unaided. Who says it's hard to Solarfilm onto bare foam? It's easy! For simplicity, a 'Red Baron' colour scheme was chosen and the Teutonic-looking model was originally named 'MagnEtilla' - geddit?

Although we thought it was a fairly witty name, it was a bit subtle for some observers, who thought it was a misprint. To avoid confusion with the well-known kit model, the humble electrical unit of inductance was invoked and the model renamed 'Heinrich'.

To add a little more choice, the plan shows alternative wingtip, elevator and rudder shape variations for British (Henry) and French (Henri) versions. Decorated in suitable colour schemes, you can get together with your friends and have a real 'vintage airshow'.

Design points: Although there will always be some tricky bits, these were kept to the bare minimum and things like the parallel fuselage planform and flat plane undercart wire were introduced to make things as simple as possible. The design also incorporates several of my most proven design features, such as sitting the main Ni-Cad directly on the undercart, which forms the removable hatch. This allows landing forces to be directly taken from the heaviest part of the model, the battery. Since a trainer must expect to be landed 'unsympathetically' from time to time, it was decided to mount the motor on a frangible breakaway plate, as shown on the plan. 3mm Perspex (not Lexan) is ideal, as it will usually break before the motor shaft bends, saving the latter from possible replacement.

Fuselage: This, as you might expect, is mostly very simple. The fuselage structure is a simple ply-doublered balsa box. After cutting out the sides and adding the doublers, sandwich them together and sand the outlines exactly equal, with the exception of the front edges where the left side should be longer than the right to give side-thrust. Whilst together, drill the dowel holes through both sides. I used 4mm alloy tube for the dowels, but 6.5mm birch dowel will do just as well.

Knowing which size of Ni-Cad pack you intend to use, mark the position of the Rx floor to allow sufficient height for insertion/ removal of the pack through the hatch. Next, glue on the Rx floor fillet strips to suit and cut and glue the hardwood screw blocks for the motor plate, with the front surfaces angled slightly down for downthrust.

On a dead flat surface, assemble the sides and formers and glue together, making sure all is square. Also add the cross-braces in the tail section. When set, add the Rx floor and ply nose bottom sheet. Cut the battery hatch in the main bottom ply sheet and offer the latter up to the fuselage, making sure you can get the Ni-Cad in and out easily. If OK, glue on the ply sheet and complete sheeting the tail section with 1.5mm balsa (grain crosswise), After it's all dry, sand off all the edge overlaps and smooth off all the surfaces. Cover the fuselage lower half back to the trailing edge location with either doped-on nylon or glass/epoxy to make it stronger and resist abrasion. That about completes the basic fuselage.

Undercart: This assembly starts with making the hatch, which is laminated from two pieces of ply. A larger piece of 1.5mm ply is cut to overlap the holr in the fuselage bottom and a smaller piece of 3mm ply should be made to fit into the hole..." 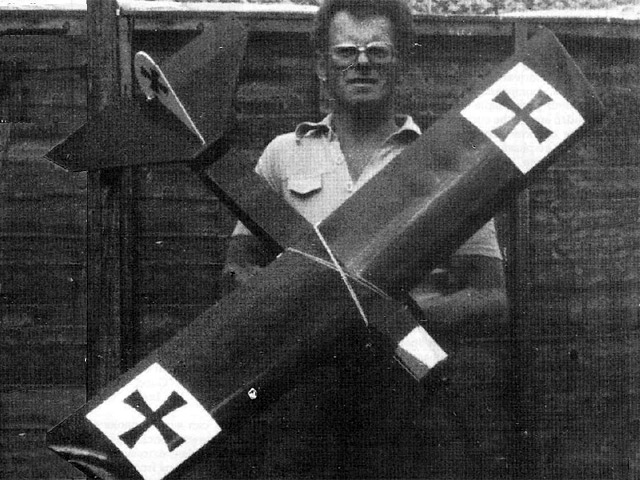