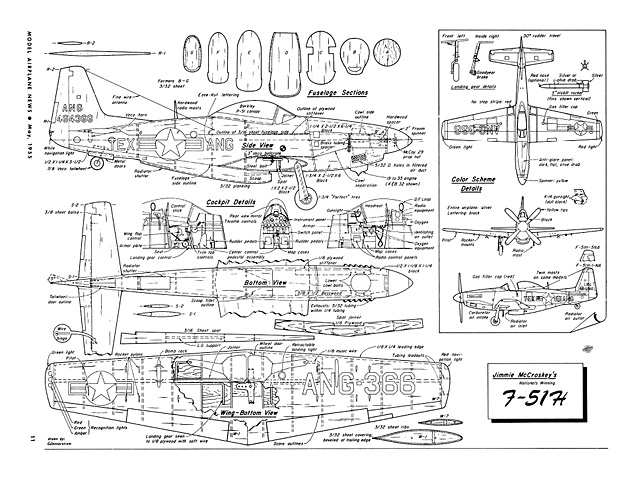 Quote: "The Mustang, by Jimmie McCroskey.

Most authentic scale model ever presented anywhere, this F-51H proved its flying ability in the wind when it won its event at 1954 Nationals.

The Mustang came into being almost overnight. While most World War II fighters took months of designing and testing to develop, the first Mustang rolled out of the plant just 120 days after North American Aviation boasted to the British that they could produce a pursuit plane superior to anything in the skies at that time. Designed for the RAF in 1940, Mustang I and II models, powered by 1,000 hp Allison engines, wrecked Nazi ground installations and supply lines with their low level bombing and strafing attacks. These aircraft, with a top speed of 375 mph, were the first single-engine planes based in England to penetrate Germany, where they gave the Luftwaffe plenty of static.

In December, 1943, 450 mph F-51B's and C's powered by 1,385 hp Packard-built Rolls Royce Merlin engines began long range escort hops and proved a consistent master for Luftwaffe interceptors. The new Merlins, with two-stage superchargers, increased effective fighting ceilings from 15,000 to 40,000 ft. With the addition of still more power and a bubble canopy for increased visibility, the F-51D began its history-making career. This was the most famous of the Mustangs and 9,603 were built. Of these, 1,337 were equipped with Aeroproducts propellers and were redesignated as F-51K's.

The F-51's performance, which has kept it alive even in the jet age, can largely be attributed to its revolutionary low drag, laminar-flow airfoil; its unique cooling system that produces no net drag; and its streamlined fuselage, plotted with second degree curves.

One of the highest honors accorded to the Mustang was its rating in 1944 by a Senate Investigating Committee as 'the most aerodynamically perfect pursuit plane in existence.'

Before describing the model, grateful acknowledgement is due North American Aviation Inc, the 136th Fighter Bomber Group, Texas Air National Guard, and ER Atkins Jr, for their cooperation and assistance.

The model is built to the scale of 5/6 in equals 1 ft, in order to accommodate commercial wheels, spinner and natronal insignia decals. Perfect 1-3/4 in wheels, a Froom 2 in spinner, and a Veco 7/8 in tailwheel are all within .02 in of exact scale. Radiant Decalcomania Co (56 W Washington St, Chicago 2), makes stars and bars that are the right size. The markings and details are copied from the F-51H-5NA, 44-64366, assigned to the 181st Fighter Bomber Squadron of the Texas Air National Guard. Lettering appropriate for your own state's ANG or regular USAF markings may be substituted. The plans have been approved by North American and should be accurate enough to satisfy the most rabid scale fan.

A well-worn K & B .32 with an intake restrictor powered the original 39 oz model at a speed of about 70 mph, enabling flights to be made in windy weather. Almost any reliable engine of .19 to .35 displacement may be substituted. One of the most important things to remember in competitive flying scale is that you have to fly o win, in wind as well as calico An engine that can be depended on to start easily and run steadily throughout the entire flight is an absolute necessity. A dependable fuel system is important, too, Many beau-tiful models fail to win in contests simply because they fail to fly, or fly long enough to qualify. Flying Scale is two words; the former is nor to be forgotten.

Begin construction by cutting the 1/8 in plywood stiffeners to shape. Drill the 3/8 in by 1/2 in hardwood motor mounts to suit the engine being used and glue to the plywood with Weldwood. Cut the fuselage sides from 3/16 medium hard balsa, and cement liberally to stiffeners..." 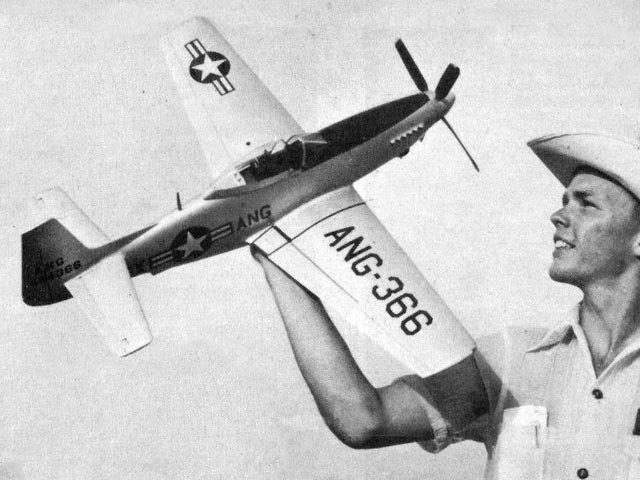 Original model was fitted with dummy flaps hinged to false spar and linked together. Flaps were looked in Up position during flight. This feature was not adopted for simplicity in this plan and Jetco kit too.
Pit - 18/11/2019
Add a comment