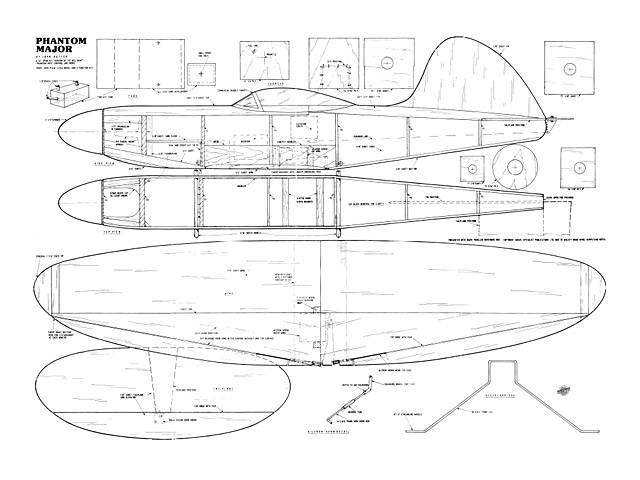 Quote: "Phantom Major is a 32 in span R/C version of Keil Kraft's famous Phantom Mite control liner. It's one of John Rutter's excellent and dead simple all-sheet models and was a free plan in the November 1987 Radio Modeller."

The Phantom Mite (oz1404) was my first control-line kit and must have introduced hundreds of other Li people to aeromodelling, too. I always liked its Spitfire-ish lines and the idea of converting it to R/C appealed to me. As is, the model would need sub miniature gear which is both very expensive and not in common use, (I've never seen any in a model) so I drew it up to twice size plus a bit extra for the fin.

Now two channel gear is easily swallowed up and, with a bit of squeezing and a bigger motor, there is even just about room for four channel gear! My model used cheap two function 27 meg gear with a PAW 1.49 diesel to provide the urge. The result is a pretty model that is pleasant and fun to fly and seems to cause a lot of interest as a lot of people look at it and say: is that a Phantom, I had one of those years ago. Even the construction is very similar to the original - I changed to a bulkhead mounted motor to make installation easier and swapped the bellcrank for R/C gear. It looks best at about 10 feet altitude in left hand circles though!

Getting started: The wings are built first and, despite the dihedral, I prefered to use aileron control for steering. The elliptical planform meant that the ailerons would have to sweep forward and this determined the grain direction of the wood in the rear half of the wing. The front half has normal tip to tip grain. Elliptical wings are supposed to give tip stalling problems so I decided to carve in washout on each wing tip underside. Remember to carve a left and right hand pair! Once the washout is done the remainder of the aerofoil can be carved and sanded and the ailerons cut away. I top hinged mine with Solarfilm despite the strange effect diesel fuel has on this material. Don't cover the wings until the dihedral has been built in (2-1/2 in one tip, the rest of the wing on the board) and the aileron servo bearers are in place. I reinforced the centre section join with very thin glass cloth and epoxy.

Try to keep the aileron servo output arm as close to the centre-line as possible in order to keep the torque rods as near to the same length as possible. I used 16 gauge piano wire torque rods with my usual flattened and bent brass tube for the arms.

The tail and fin are simply cut to shape and sanded 1/8in sheet; I top hinged the elevator and didn't have a rudder so didn't have to worry about it! Later the film is cut away where these parts are glued to the fuselage to give a stronger joint.

Fuselage: The fuselage itself is a simple box that shouldn't give any problems. I reinforced the sides with 1/64 ply glued with Evo-Stik; don't use any thicker ply or you will have problems with pulling the nose in later. Once set, one side is laid over the plan and formers 2,3,4 and 5 are glued to it. Leave the engine mount on F2 and pre drill F3 for the U/C. Glue the other side to this assembly. When dry, pull in the tail and add formers 6 and 7 making sure the fuselage stays straight. Pull in the nose (I ued a 'G' cramp) and glue F1A in place followed by the triangular reinforcement. Glue and sew the u/c in place and position the elevator servo and its bearers as high a possible in the fuselage. A drop of cyano on each end of the bearers seems sufficient to hold them.

Floor the tank bay and add the nose underside sheeting, I used a home made 'clank' tank of about 40cc capacity but the important thing to remember with a diesel is that the plumbing has to be neoprene, not silicon. I glued the tank in place with silicon sealant (the tank shouldn't leak!), fuel proofed the bay just in case and added the top decking without making a hatch for the tank. You might have less confidence in your tank and devise a hatch of your own. 40cc seems to last forever on the PAW but glows are thirstier so you might like to vary the size of tank if you use a glow.

When adding the top rear block it is more accurate to cut out the slot for the fin before glueing and it will need to have some of the underside chamfered away to let the tail in. Cut the hole for motor access and fit the motor with the spinner you intend to use. Mark where you need to cut away the fuselage and remove again. Carve and sand the fuselage to shape, not forgetting to mark off where the wing touches the underside of the nose block. Slide the tail in place and make up a pushrod. Drill the fuselage for the wing retaining dowels but don't glue them until after covering. Check that the wing and tail are going to seat in alignment and adjust to suit. Deck the underside with 1/8 sheet (grain lengthways) being careful to cut the 'V' to allow for the TE of the wing. Sand to shape.

Finishing Cover the fuselage with film, glue in the retaining dowels and paint them. Cut out a hole for the R/C switch and fuel proof the engine bay. Glue the tail and fin in place and re-check the alignments. My original model flew very peculiarly at first because I hadn't noticed that my two year old son had knocked the tail to one side before the glue set - I've since reset it. The canopy I used was home-made but you shouldn't experience much difficulty finding a commercial one to suit.

Into the air! All set? Rise off ground is pretty well impossible from our rough strip with such a small model and no rudder so a firm, flat push is needed to get the model airborne. Fortunately the model is pretty easy to hold behind the wing. When 'on song' the PAW 1.49 provides plenty of urge but the climb is not spectacular so let the model climb out pretty slowly - it won't climb at 45 degrees! The model will roll from the level but prefers a bit of a dive to gain enough speed to do a round loop. It will fly inverted but needs a lot of down. It does a version of a stall turn if you try to loop with not enough speed and I think that this is, in part, due to a minor tip stall. I have never managed to get it to drop a wing in normal manoeuvring but it feels a bit 'fidgety' if the stick is suddenly hauled back all the way. Don't omit the washout! It will hardly stall at all in the glide and the latter is pretty fast and flat if the stick is left alone. It will flare nicely for landing but this tends to be very short with my model as my 1960s vintage piano wire (from a KK Spectre) bends like warm toffee. Don't listen to old hands who say that wire isn't what it used to be.

The slightly barrelly roll and the elliptical outline is very reminiscent of a Spitfire and a bit of fiddling with the tail end would produce a "stand a mile off" late mark Spitfire! I tend to fly the model close in as it is so small anyway but the funny thing is that it looks much more at home in tight left hand circles than it does in right hand ones. I wonder why?

The model has proved to be tough and reliable but I feel half naked walking out to the strip with just a model, a can of fuel, the Tx and a cloth to wipe off all that diesel gunge. What happened to all that glow motor paraphernalia? Definitely a model that can be slung in the back of the car 'just in case' if your better half can stand the smell!" 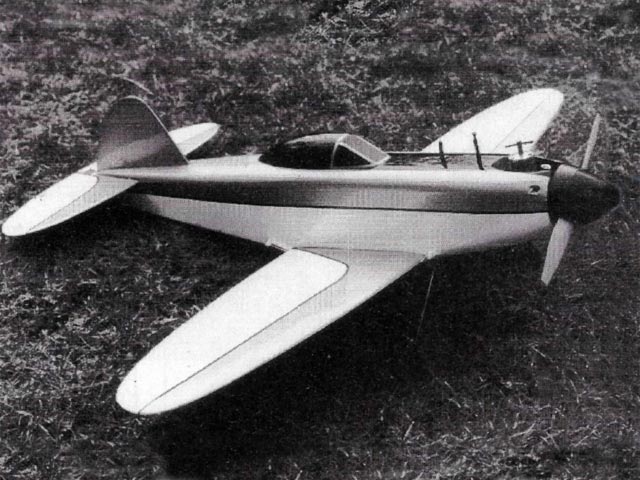