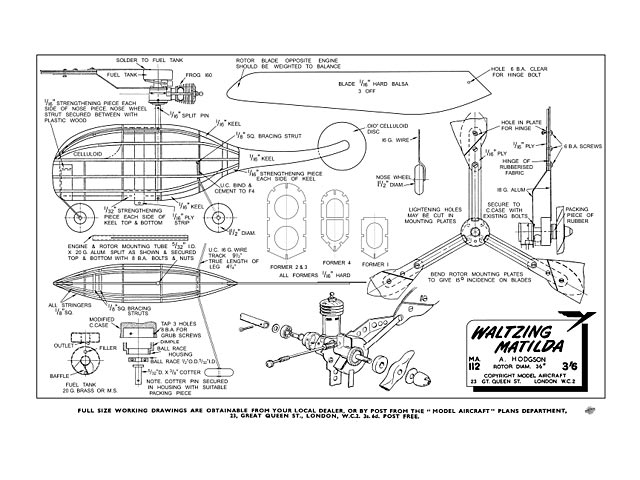 Quote: "THIS model will appeal to all modellers who like to 'have a go' at something a little out of the ordinary. It is considered well within the scope of the average modeller and the model to which this article refers was made without the use of a lathe.

It will be appreciated by anyone who has studied the helicopter from a modeller's point of view that the chief snag is the tendency for the fuselage, and, in fact, everything else, to spin around in the opposite direction to the rotor. In addition, there is the question of reduction gearing, with its attendant problems.

With the object of making a model that looked and behaved like a real helicopter, a collection of gears were obtained and experiments made. But each time the old bugbear cropped up - torque, plus a clutch to enable the engine to be started and adjusted before releasing the machine.

It was whilst endeavouring to overcome these problems that the idea of using the torque instead of trying to overcome it occurred to the author. The idea was to mount an engine, fitted with an ordinary airscrew so that it revolved in a horizontal plane and fix the rotor blades to the crankcase. From this happy thought a successful model helicopter was evolved, but not without a lot of hard work and many disappointments and setbacks. At this stage I should hasten to say that the whole thing was a matter of trial and error as the mathematics of helicopters is far beyond the author.

Experiments in contra-rotation were carried out with a Frog 160 which had been in use for some time and which was very easy to start. No difficulties were experienced with starting once a satisfactory fuel supply had been achieved.

A flat duralumin spider with three legs was made and attached to the crankcase by means of the four set screws which hold the main bearing housing in position. A 1/2 in ball race was then fitted into a perspex block and bolted to the existing crankcase. By means of a short spigot passed through the ball race, it was possible to hold the motor in the vice and later, after the rotor blades were fitted, in the hand. An 8 x 5 Frog plastic airscrew was used.

Running tests showed that no ordinary fuel supply would behave consistently when the crankcase was rotating, due to centrifugal force, and experiments with various types of tank were made without much success. After much thought an idea presented itself. It was to use a small cylindrical tank fitted around..."

Update 03/03/2020: Replaced this plan with a clearer version (patterned background removed), thanks to TonyP. 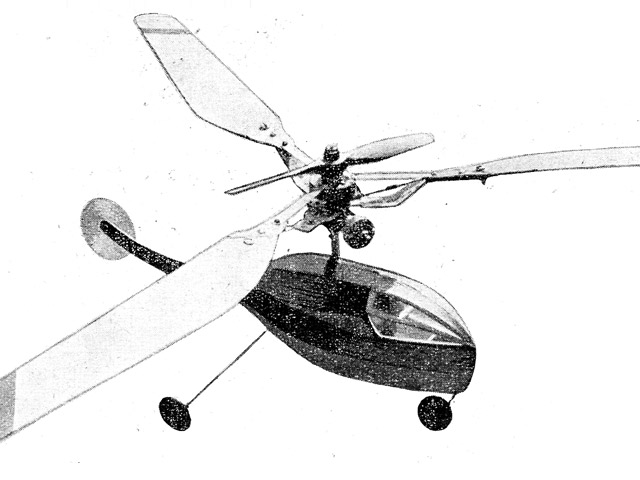