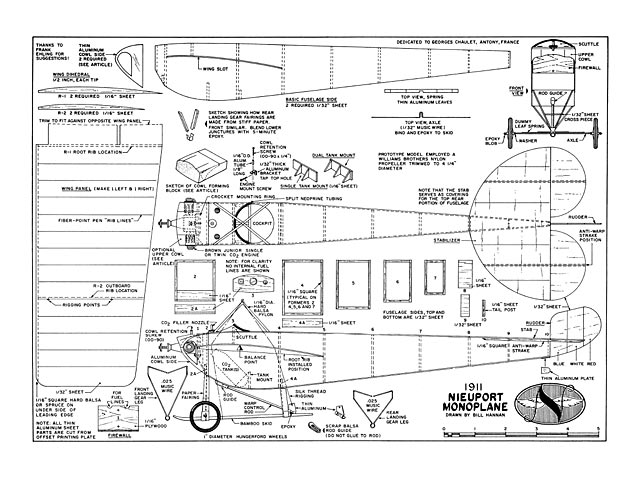 Quote: "Nieuports even prior to WW I were scientifically designed machines with extraordinary performance for their day. This rubs off on our all-balsa CO2-powered model.

NIEUPORT MEANS biplanes to the average aviation enthusiast but before World War I, Nieuport was synonymous with monoplanes of great speed and efficiency. Edouard de Nieport, who later changed the spelling of his name to Nieuport for commercial purposes, was design-ing aircraft scientifically while most other aviation pioneers were still bumbling along with 'cut-and-try' methods. While most of his contemporaries were hanging larger engines on their flying machines in search of greater speed, Edouard was working with Gustave Eiffel (of tower fame) wind-tunnel testing his designs. The efforts paid off in the form of many records for speed, duration and altitude, including some es-tablished in the United States. Perhaps the crowning achievement was the winning of the 1911 Gordon Bennett Cup Race. First spot went to American Charles T Weymann, while Nieuport himself, flying a sister ship, placed third in the event.

Many variations of these aircraft were manufactured, including versions with 2-, 3-, 5-, 7-, and 14-cylinder engines. Only two machines are known to exist today. One is a Gnome-rotary powered example, in Sweden, while the other is a 2-cylinder type located in the French Musee de l'Air near Paris. In the company of JD Gillies of Scotland and Georges Chaulet of France, your author recently had the priv-ilege of examining the latter craft firsthand. It is a magnificent piece of work, literally decades ahead of other machines of its time. For example, a Wright 'Baby' racer also on display in the museum, looks positively ancient by comparison.

My personal fascination with the Nieuport monoplanes extends back ten or more years, and they have served as inspiration for a number of flying models. Some have been rubber powered and others glo-engined. Our featured model is the second to have utilized CO2 engine power..." 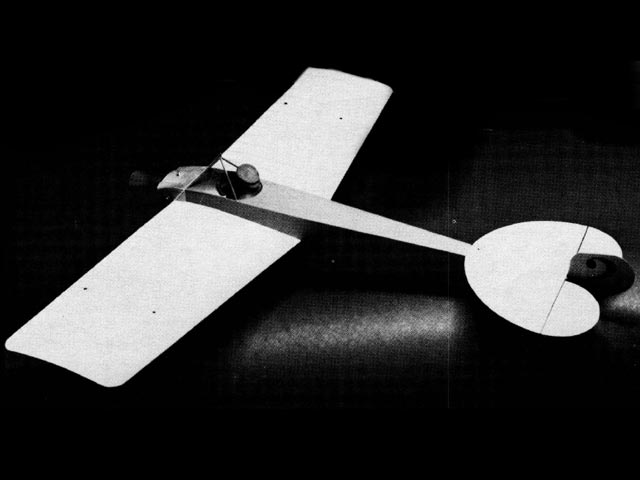 I've been really excited to see the Bill Hannan designs you've been able to publish lately. His designs are simple, and pleasantly eccentric.
James Hickman - 15/11/2019
A couple of people have been in touch to say that pages 2 & 5 of the article are blurry & unreadable. Does anyone have an original they could scan & share with us? Thanks :-)
Mary - 12/01/2020
Add a comment