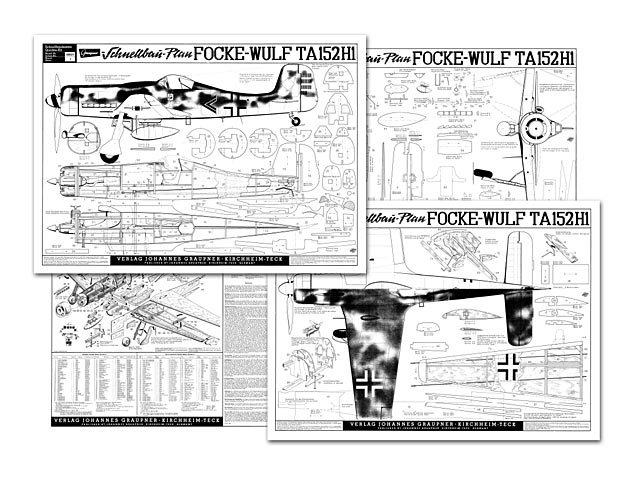 Note this plan has 4 sheets. Includes full build instructions in both German and English.

Quote: "Preface: Next to the Messerschmitt Me-109 the FOCKE WULF FW-190 'Shrike' was the best known German fighter plane of WWII. In the beginning equipped with the twin row radial BMW 801 its appearance over the western frontier was a genuine surprise on account of its superior performance. In the course of development and to meet the demands of the RLM for a high performance fighter the plane was enlarged and the BMW radial engine was replaced by an in-line V-engine of higher output. In this manner the FW 190 D1, D9, D12 and D13 were evolved, externally recognizable by the elongated engine cowl, which - due to its annular cooler - closely resembles the cowl of a radial engine. In addition to these types the radial engined FW 190G low level attack subversions were continued.

Conforming to the standard German procedure to name planes after the initials of the manufacturer or designer, the FW 190 'Shrike' was rechristened in 1944, starting with the 'D' version. Its new name because TA 152, with TA standing for Kurt Tank, the designer, while 152 was the number alotted by the RLM. Kurt Tank, an excellent pilot, became well-known before WWII by the sensational record flights of this passenger plane FW 200 'CONDOR' to New York and Tokyo.

The TA 152 A, B, C, E and F versions were eventually followed by the TA 152 H, a high altitude fighter, which is the type modelled in these plans. Together with the long distance version 'R' it was the last in a long line of FW 190 variants and was considered the best German single engined propeller fighter of the period. It demonstrated its superior speed convincingly when Kurt Tank, who personally tested all of his designs, outsped four Mustangs, which attacked him during take-off from Hannover-Langenhagen aerodrome with his TA 152.

Building Instructions: The parts are numbered in the sequence of assembly. Certain parts, which are bi-sected as f. i. plastic part (57), must be thoroughly cemented before assembly and left to dry.

Construction of fuselage: Cement parts (1), (2) and (3), pin to building board making sure that they are set at right angles with same, add and cement part (4). Put a suitable piece of scrap balsa (about is/a" high) under the rear end of part (3) to get correct elevation. Then add fillets (5, 6, 7, 8) in this sequence. Provide cut out for fuel tank in left hand (8) only.

Horizontal tail: Spot-cement both halves of parts (9) and (11) with a few drops of cement and sand to correct streamline shape as shown on sheet 3. Split parts again, fit hinges, add parts (10) and (12), assemble once more and cement the complete set of horizontal tail surfaces to part (3), parallel to the longitudinal axis of the fuselage.

Add parts (29-37) in sequence of numbering. Build tailwheel gear (38-43) as shown on sheet 3, solder well and cement with parts (44) to part (3). Now fit fuselage side planking (45), moistening the outside and - in case the wood supplied in kit should be a bit hard - prebending it over a candle, which ensures a perfect curvature of the skin. Same procedure for parts (46-51)..." 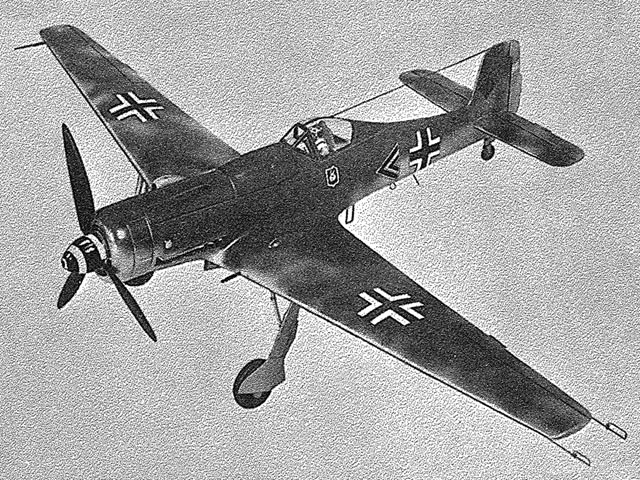