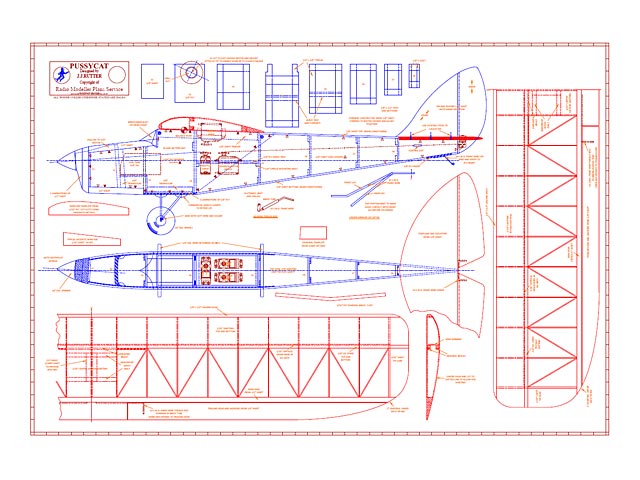 Quote: "Steve/Mary, Please find attached pdfs for Pussycat 15 which is on your wanted list. It is designed by J.J. Rutter and was published in Radio Modeller, July 1994. Regards, Al."

As a family man, I usually end up with my children with me when I go flying and the eldest, James, is beginning to show an interest in the aeroplanes rather than the other 'attractions' nearby. This is fine but it's some time since I've needed a trainer so I had to give the matter a bit of thought.

I'm a bit fed up with the 'sameness" of most trainers. They all look like Cessnas or high winged boxes. I'm a great fan of British between the wars light aircraft, so I thought that a trainer could be based on one of these designs, giving something functional but definitely 'different'. I settled in the end on the DH-Puss Moth as a basis for the design but no way is the model that resulted, Pussycat, meant to be even stand a mile off scale. With appropriate markings though it looks the part and could be made to look even more authentic if non-functional struts and landing gear oleos were added. The size of the model was decided by the size of the motor I wanted to use (one of the new CS .15s) and the fact that I wanted a very slow flying model.

Tail surfaces: Being bone idle and liking quick results, I started with the tail end. All surfaces are merely cut out from 1/4 in sheet and shaped to aerofoil section. The elevators are joined firstly with a piece of pine or spruce and then with a piece of 14G piano wire. The whole lot is covered in film, centre hinged with mylar and uses normal commercial external horns. I reinforced the fin/tail join with cocktail sticks glued with thin cyano after pushing in place. That was easy, the bits definitely look 'de Havilland', so on with the next bit.

The wings: The next bit turned out to be the wings. Here I was influenced by a little flying boat I'd built a some time ago. The wings for this model were very light but stiff, even when covered in film due to their geodetic ribs, so I copied this feature for Pussycat. Due to the size of the wings and the need for dihedral they are built in two halves over the plan. In order to get all the ribs the same I made a template from scrap 1/16 ply (minus the spar slots) with a couple of panel pins banged just through it to act as locators and simply cut around it for both the 1/8 and 1/16 ribs.

This lot is then pinned together into a sandwich for finishing to final size and the cutting of the spar slots. I did the latter with a razor saw by the way. A similar technique was used for the geodetic ribs. Once the ribs are cut out the rest is easy. Cover the plan with a bit of polythene (the backing off Solarfilm is ideal!) and pin the bottom spar to it. Glue all the ribs in place noting the angle of the root rib and add the front and rear strips. Glue the top spar in place and finish with the geodetic ribs. Trim the ends of the spars if necessary and fit the tip. When set remove from the plan.

Now I don't know how the editor will present the drawing but as mine was not on the back of anything else I merely rubbed it over with turps to give a translucent sheet and reversed the paper to give a perfect mirror image of the original. You may have to trace the second wing. When the second panel is finished and set, the roots of both panels are carefully sanded smooth for joining along with the leading and trailing edges. I left one panel flat and chocked the other up 4 in for dihedral. You may have to make a minor adjustment to this to get a good fit between the ribs or you may want to remove most of the dihedral if you want a more scale look or need a less stable aircraft.

Once this assembly is set I carefully removed a bit of material from the centre ribs to add the dihedral braces. Finally I sheeted the centre section with 1/16 top and bottom. This extra thickness at the centre is hardly noticeable when sanded in and is much easier than producing special ribs for the centre section. Now there is a decision to be made. Do you want ailerons or not? I have a fancy Futaba Tx so I fitted two small servos and 'flapperons'. The model flies very nicely with rudder/elevator/throttle only though, so it's up to you. If you don't want ailerons simply glue the trailing edge strips in place.

If you want ailerons, cut away the centre sections from the strips and chamfer the front of the ailerons themselves to a 'V' for hinging. Hollow away the appropriate bits to accept the torque rod tubes (I use the sharpened end of an extra bit of tube for this) and make up the torque rods as shown. Glue in place with PVA or VERY SPARING amounts of cyano followed by the remaining trailing edge strips. Fit the servo on its rails as shown on the plan on one side or other of the centre rib. It might be an idea to reinforce the centre join with a strip of nylon/PVA at this point but I didn't bother. Make up and connect the threaded pushrods and temporarily fit the ailerons and hinges just to make sure that everything will work before moving on.

Covering the wings: I covered my wing with Solarfilm, white on top, red on the bottom. Now because white doesn't cover too well over red I did the white first. This left only a very narrow strip of leading edge for the red to stick to on the underside. On the third flight this strip came away in the air resulting in the wing panel blowing up in the slipstream and disintegrating, followed not too long afterwards by the rest of the model, I might add! Incidentally, the edges were ironed both before and after trimming as well as being sealed with Clearcoat along with every other join. After rebuilding I covered the wing with doped nylon before re-filming it. The wing is now incredibly stiff as well as shiny but the pull of the nylon has distorted the leading edge somewhat. I can't win, it seems. Using only one colour wrapped right round and joining around the trailing edge is one solution.

The fuselage: The fuselage has to be next as it's the only bit left. Most of the formers are built up over the plan; this gives very stiff and light formers with built in clearance for the pushrods! The sides are traced and built up from medium hard 1/8 - you have to be able to bend it. This is one reason why the reinforcing ply is only 1/64 thick, stuck to the sides with Evo-stick.

Assembly is pretty straightforward. Put one side flat on the board, inside uppermost, and glue formers 3,4 and 5 to it. Cyano assures quick setting and not a lot of waiting. Put the other side down and glue the first side and its formers to it after first checking with squares to make sure that everything is in the right place. Over a straight line marked on the board, line up the centre of the formers (easiest if the fuselage is inverted) and pull the tail in. Glue the rear three formers in place keeping everything straight. Pull the nose in and glue F1 in place. Cyano is all but essential here..." 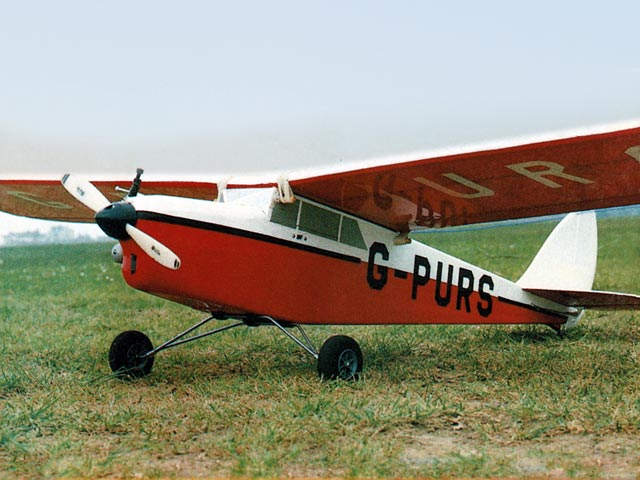 Many, many thanks for getting this plan online.
Jerry - 13/11/2019
That's a very pretty one. Good choice on your part.
SteveWMD - 13/11/2019
Dear Outerzone, I have built Model oz11698 the Pussycat 15. I have previous experience of IC engines, which are both noisy and messy. For this reason I would like to install an electric motor in this plane. However, I need full advice on what equipment to install. Can anyone help? Many thanks,
Alan Reeves - 03/11/2021
For electric power, it won't be so easy to convert your Pussycat 15 to electric power if it's already built. I did the same thing with my Dumbo, but it was only partially finished. First thing you need to do is move the firewall forward, the motor will be much smaller. Then you need a battery hatch to replace the fuel tank. The tail looks a little heavy, so my new tail was built up for lightness. If you include the windshield into the battery hatch, it gives more room for the battery. My lightened Dumbo ended up weighing 2-1/2 pounds, with battery, about what yours will weigh. I used a "480" motor, 1000 KV, 3 cell 2200 battery, 11 x 7 APC e prop, 36 AMP ESC It pulls 27 AMPs. Honestly, it will be easier to build a new model than try to convert yours. The nose and spinner will also have to be re-done. I have found ALL the plastic spinners badly out of balance, metal is OK. If your prop is out of balance, it will ruin your bearings. Ask me how I know.
Doug Smith - 04/11/2021
Add a comment