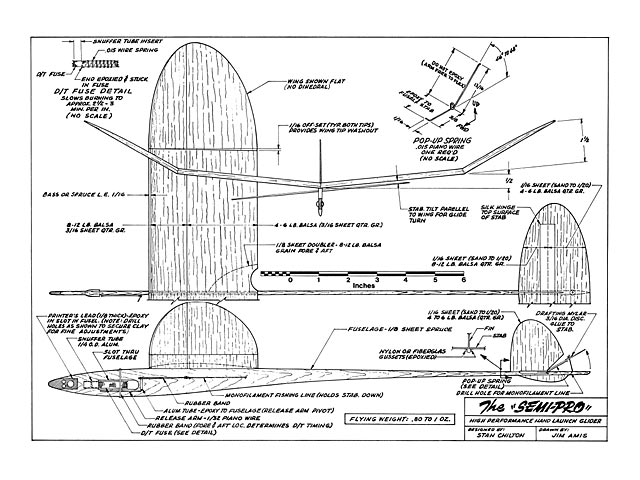 ONCE A HAND-LAUNCH glider enthusiast gets the hang (or as Larry Conover would say the 'flang') of chunking pieces of balsa and spruce into the air and seeing them stay there longer than two and one-half seconds, and maybe even circle once or twice before whumping into the ground, it isn't too long 'til he wants more of the same - for a longer period of time.

The Semi-Pro was designed for just such an individual, who perhaps cut his eye-teeth on a more basic HLG design and now wants a better bird with good contest capa-bilities. A revision of the original 'Pro' glider featured in the 1959-61 Zaic Year-book, the Semi-Pro has been refined to offer a reliable launch pattern, a good tran-sition and a more-than-acceptable glide.

Since glider flights are basically two-part - going up, and coming down - the Semi-Pro is designed to do both well. It features a cleaned-up nose area and thin airfoil for launch penetration going up, and a pop-up tail D-T (dethermalizer) mode to make sure it can escape thermals at the appropriate time and get back down.

Construction: The Semi-Pro's fuselage is of straight-grained 1/8 in spruce. Cut it out slightly over-size to allow for stress-relief in the tail-boom area, then sand it down to final shape. Be sure to align the wing and stabilizer platforms as per the plan in order to get the proper angle for a good roll-out at the top of the launch. The slots for the nose weight and the snuffer tube can be cut with a Moto-tool, or by using a razor saw. Work carefully so as not to split the wood in that area. The nose of a HLG takes more of a beating than any-thing else, so it is necessary to preserve whatever original strength is there. Epoxy and fair in the lead nose-weight and the snuffer tube using Hobby Poxy 2. The five-minute epoxy, Formula 4, can turn glassy with age and heat from numerous fuses and is too subject to shattering to be used around the nose area. Streamline the fuse-lage shape leaving the wing platform flat and sanding a slight angle into the stab mount to provide the stabilizer tilt needed for glide turn to the left. (See plan front view.)

Shape the wing blank carefully from good 3/16 in quarter-grain (speckled appearance) balsa and glue on the basswood leading edge using Arnbroid, since it sands better than Titebond. After the leading edge is dry, carefully mark the wing high-point and the dihedral joints and plane away excess wood from the high-point to the leading edge. Now using successively finer grades of sandpaper and very little pressure, give the wing its final shape. Pay particular attention to the wing tip areas to make certain they are as thin as indicated on the plan to help center wing mass over the fuselage.

Tail surfaces are cut from balsa sizes called for on the plan. Cut them oversize, sand the airfoil in, then sand them to their final shape to avoid warps induced by ex-cessive pressure during the sanding process. The stabilizer should be doped with five to six coats of Sig Lite Coat thinned at least 50% in preparation for the silk hinge needed for the pop-up tail. Allow each coat of dope to dry thoroughly, and sand it lightly before applying another coat. Be very careful during this process to avoid inducing warps. Once the final coat of dope is dry, separate the stab on the hinge-line and butt the two pieces back together. Now lay the silk hinge over the break, and using only thinner on your brush, lightly saturate the silk so the dope underneath it softens and sticks to it. (The hinge, not your brush!) Once the hinge is dry, give the stab one more coat of very thin dope to seal everything down..." 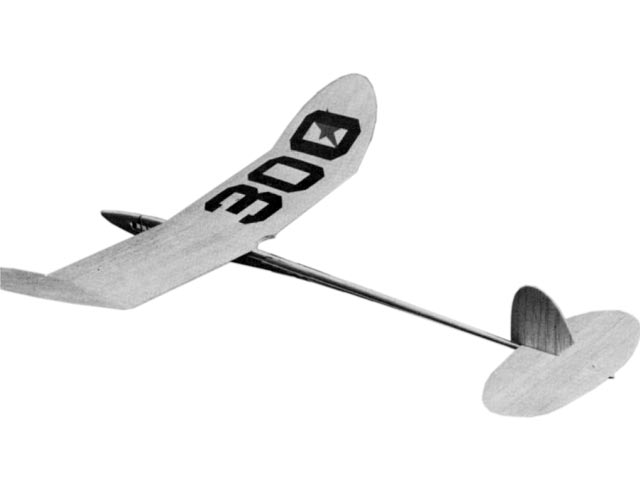