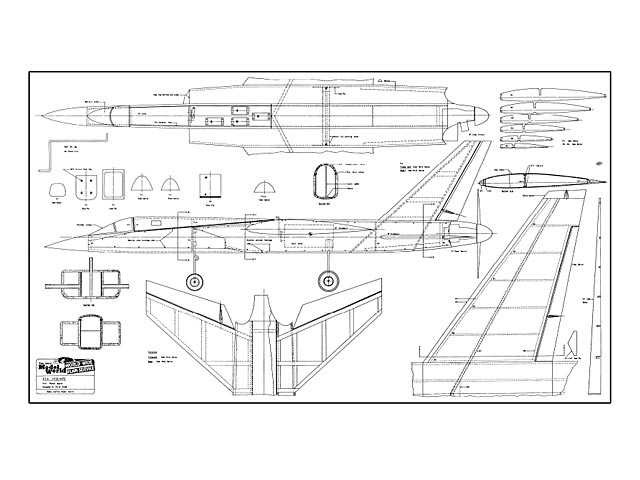 In the fifties the US Navy issued a specification for a carrier borne bomber with a nuclear capability and as a result the YA-33-1 made its maiden flight on August 31, 1958. At the time the Vigilante boasted the most advanced automatic flight control system in the world and the aircraft was developed with a special flight, VAH-3. As the A3J-1, the Vigilante took part in the development of the Navajo B-64 missile and also surprised the aeronautical world with its rearward-ejecting bomb tunnel. In 1962 the designation was changed to A-5A and the aircraft embarked on the super-carrier Enterprise. Development continued with the A-5B and the best known RA-5C.

The model Vigilante is a logical development of my experiments with delta winged aircraft and with pusher engine installations. It's a very compact model and for this reason it's built in one piece.

Construction: This begins with the four fuselage 'sides', two long inner ones from nose to tail and two shorter outer ones from jet intakes to tail. Add the ply doublers, the full length for the inner sides, just around the under-carriage blocks on the outer sides. While these dry the formers are cut out and drilled for control runs, also the nose former must be prepared for the nose wheel leg mount and the tail former for the engine mount. The formers and sides can now be epoxied together and held together while resting on a flat surface.

Now prepare the fuselage bottom, gluing together an appropriate width of balsa to fill the area from the 'notch' on the outer sides to about four inches behind this point. To this is firmly epoxied the main undercarriage block. This bottom sheeting section is fixed to the fuselage at the same time as the outer fuselage panels are fitted, then a three inch wide section of the fuselage top is covered, where the fin and rudder must be fixed. Top and bottom sheeting is fixed cross grain.

At this time the main undercarriage could be fitted. Now the underside sheet-ing can be completed and the hard balsa nose cone glued into place. The sheet that closes off the air intake section can now be fitted and the linkage to the nose wheel arranged so that the fuselage top sheeting from the wing to the nose can be completed.

The tail surfaces can now be built up. Note that the fin spars extend to the bottom sheeting of the fuselage. Holes are cut in the outer fuselage sides to accept the tailplane panels and in the inner sides to suit the braces.

Now for the wings. The ribs and the web W11 are cut out according to the plan and assembeld over the plan with the spars. Notches are cut in the inner and outer fuselage sides..." 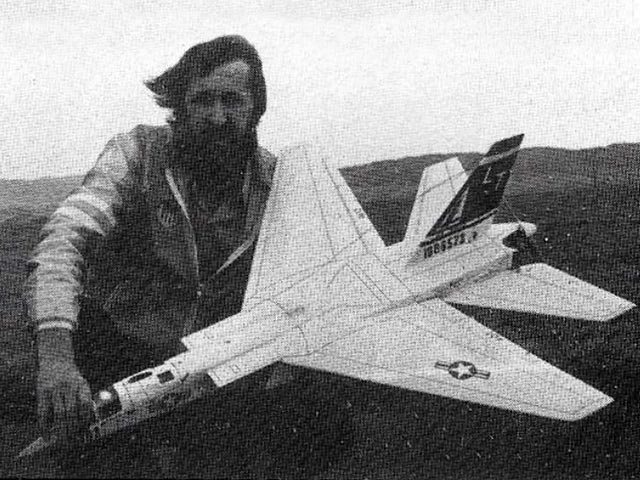