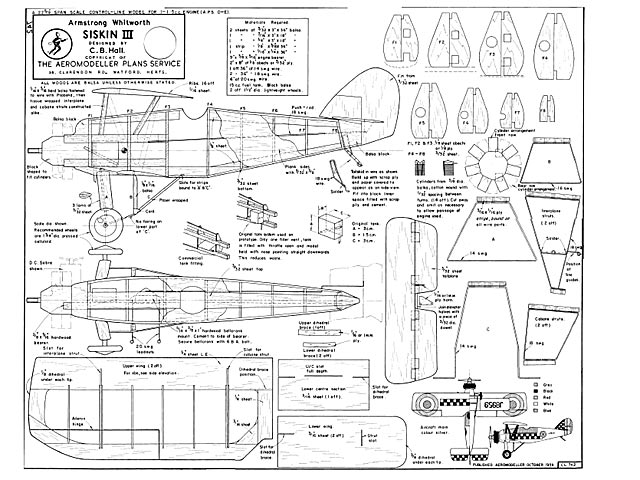 Quote: "THE SISKIN is an aircraft which hardly ever appears as a model, though its proportions are suitable for a control liner and it can be made into a most colourful machine. It was the first all-metal fighter to fly with the Royal Air Force and was the standard mount of several famous squadrons in the early thirties. With a simplified structure and a minimum of external detail it makes a pleasant handling model for the 1.5 cc motors and should present no difficulties to anyone who has completed a planked fuselage.

A feature of the design is that all parts are made and finished separately and the aircraft is assembled from the completed components. This makes it easier to cope with the painting of the squadron markings and to put a good finish on inaccessible parts of the. airframe. To achieve this the order of construction is important.

Make the upper wing halves separately over the plan and join with dihedral braces. The angle is small but important. Carve the lower wings to section in one piece before making the dihedral bends. Cut the fin and tailplane from sheet balsa, then cover an these parts in lightweight modelspan.

Complicated bending patterns for the wire parts have been avoided. Everything can be made in two dimensions, bending the wire over the plan so that it fits exactly on the patterns shown. Only one of the undercarriage components needs a slight extra bend, which shows in the elevation and is best put in after bending to fit the drawing.

The fairings, made from strips of balsa shaped to a triangular section, are attached with an impact adhesive such as Goodyear Pliobond. The adhesive is run alone the edge of the fairing, and down the side of the wire to which it must be fitted, and left for ten minutes. Then when the two surfaces are pressed together a firm joint results..." 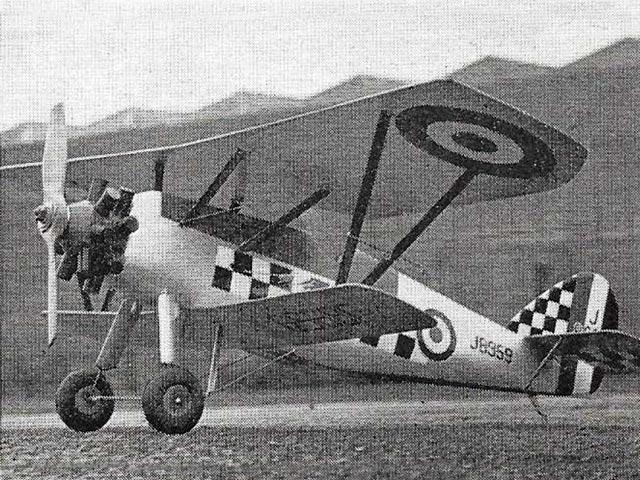