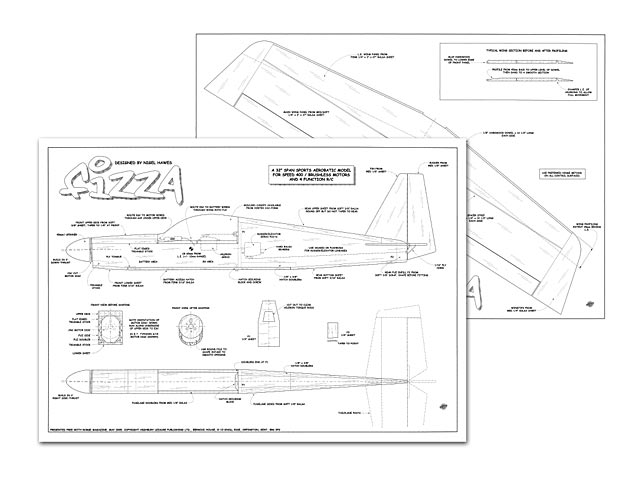 Quote: "Free Pro Plan: Quick to Build, Cheap to Fly. Put the Fizz back into electric flying with this effervescent sport model. Fizza, by Nigel Hawes.

As electric motors get more powerful and efficient, and battery capacities go up and their weight comes down, it's very easy to get carried along by the mania for the latest and greatest gear. Before you know it, you find that you've lashed out far more money than you intended on some specialised piece of equipment for a complex model - last year's twin-400BL Tornado being a case in point! The idea behind this column, though, is to promote low-cost, entry-level electric flight. So this year, instead of my usual semi-scale offering I've decided to get back to basics and bring you a model that'll put some fun into your flying without costing a fortune.

Answering the Critics: While the Fizza is similar to previous Hawes offerings in so far as it's minimalist, functional and robust, I've tried to make this design appeal to my most critical audience - those of you who've not been tempted to build my previous models. I realise that some of you don't fancy flat sheet wings, either because you don't want to profile them, or aren't convinced of the outstanding qualities and benefits. Others have doubts about my 'nipped tube link' aileron set-up - although I have to say that it works perfectly well for the thousands that use it!

With the Fizza, then, I hope that I've come up with a way of making the flat sheet wing attractive to everyone, and introduced an alternative method of aileron operation without compromising the design. Talking of compromise, I should emphasise that your choice of balsa will make a big difference to the final performance of a model of this size. The Fizza's strength lies in its design not in the materials, so you can use the softest, lightest balsa you can find, and the minimum amount of glue. Every ounce you save increases the Fizza's performance and your capacity for fun.

A Wing in 20 Minutes: Well, excluding the glue drying times, that is. Even so, you'll find that this wing is very quick to make, especially for those who've had a go before. To make it, all you need is a length of 1/8 in hard dowel (which makes for very tough leading edges), two sheets of 1/4 x 3 in balsa (one of which should be firmer than the other), and a length of appropriate size trailing edge stock. Oh, and don't ignore the 6 x 1/16 in ply spar and spacing strips. They're included to guard against wing failure by replacing the strength lost as a result of the aileron servo cut-out.

After cutting the main wing panels and butt jointing them using the spar and spacers, glue two pieces of dowel along the lower half of each leading edge, leaving a 2" (50mm) gap between the dowels' inner ends, This join is best carried out using medium cyano' and should be made on a level surface to ensure that the wing is absolutely flat.

Next, add the tips, noting that the they extend 1/8 in forward of the wing panel so that they're level with the leading edge of the dowel. Use five-minute epoxy for this - a cyano joint may be too brittle to withstand profiling later on.

When everything has set, mark out the extent of the wing profiling with a line drawn 45mm behind, and parallel to, the leading edge. Then sand the wing so that it tapers down to the width of the dowel, being careful not to sand any flat spots into the rounded edge of the dowel. Once you're happy with the leading edge profile, cut a pair of ailerons from your trailing edge stock such that there's a 2-1/4 in (55 mm) gap between them in the centre, and a 1 mm clearance at each tip. Don't hinge them permanently yet, though if you're using Mylar or flocked paper hinges you can loose fit them. The taper of the ailerons completes the aerofoil section of the wing, so no further profiling is necessary. All that remains to finish is to taper the rear of each tip to match the ailerons.

Aileron Linkage: To control the ailerons, the Fizza uses torque rods made from 16swg piano wire that run in guides made from short lengths of orange inner poached from a lightweight SLEC snake. The guides are simply epoxy glued to the back of the wing panel and holes are made in the ailerons to correspond with the torque rods. The rods themselves can either be operated by nipped tube links from the servo pushrods, or you can try my new alternative method. This involves sliding a small piece of silicone tubing down the vertical part of the torque rod to form a seal, placing a commercial plastic aileron horn where required, and filling the hole in the top of the horn with epoxy..." 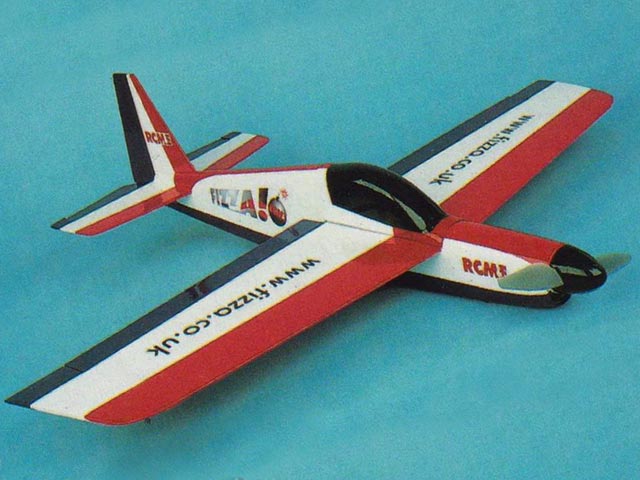