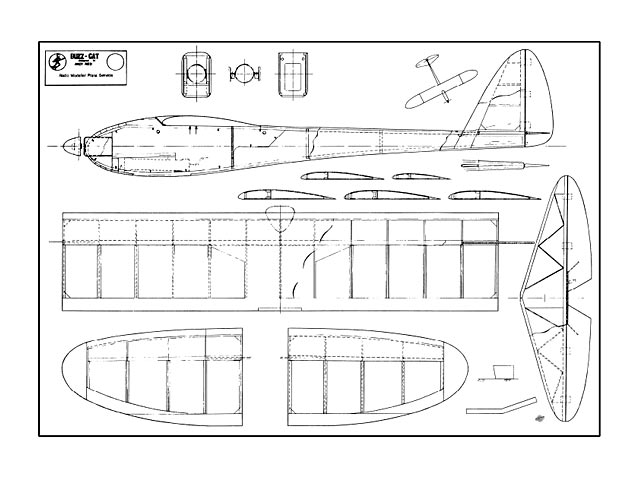 Quote: "The original idea for 'Buzz-Cat' developed from previous experience with diesel powered models which used the concept of combining relatively modest power with a good gliding performance to obtain a relaxing, easy to operate machine for Sunday flying. Well, almost ideal that is, since diesels, or glow motors for that matter, produce a great deal of oily mess which quickly spreads itself over both model and operator with complete impartiality!

The next step towards the truly ideal sports model was logically to replace the two-stroke motor with a clean, convenient and quite electric power unit. After a little head-scratching it seemed possible that a model could be produced at about 5 ft wing span, having a target wing loading of 14 oz/sq ft which would retain sufficient gliding performance to make use of available upcurrents, without being too flimsy for knock-about sports flying. The end result was a design somewhat reminiscent of certain continental power duration types of the late 1940s and early 1950s, and although never particularly intended to be vintage, it is a style which should have a fairly wide appeal. The name 'Buzz-Cat' was selected as having a suitably 'jive' period flavour.

Prospective buiders will find that a standard electric car motor with prop-adaptor and a 6 cell 7.2 volt battery pack will provide entirely adequate power for 'Buzz-Cat', but it is recommended that compact radio equipment (not necessarily fully miniature) with a 270mA nicad is used. Performance depends upon keeping wing loading below about 15 oz/sq ft and every bit of sensible weight saving helps in this respect. The prototype built as described in this article turned the scales at 2 lb 8 oz giving a wing loading of 13 oz/sq ft but it is just as robust as any two-stroke powered sports model.

It is essential that some form of transmitter operated motor control is employed, and in the interests of complete flying safety this should be done using a third channel on the transmitter, separate from the main flying control functions of rudder and elevator. A proportional motor-speed controller is suggested as these can now be obtained for only a little more outlay than a compact servo plus micro switch, and will be a worthwhile investment if the electric flying bug bites.

Building Buzz-Cat is perfectly orthodox and should be well within the capabilities of the average modeller. The most important thing to remember is to maintain rigorous weight control at all stages of construction. Electric motors of the type under consideration here are not super high-power units and performance will be sluggish if you build heavy. The secret is 'strength with lightness'.

Fuselage: Construction of the fuselage could hardly be easier, but as the cross-section dimensions are determined by the method of motor mounting it is necessary to make a decision on this item first. The simplest motor mount is a 1/32 plywood tube rolled around the motor so that a tight push fit is obtained when the motor is inserted from the rear; the completed tube is epoxied to suitable doublers on the fuselage sides. The internal width must in any case be sufficient for the battery pack to be inserted with reasonable ease.

Alternatively, the motor mount may be made removable by epoxying dural lugs onto the sides of the ply tube and reinforcing with glass cloth; this mount is then screwed to short hardwood bearers, epoxied to the fuselage sies. (A suitable commercial motor mount may be used if preferred). The fuselage sides are parallel back to former F2 and thus the width of this former will be decided by your choice of motor mounting and size of battery pack. The prototype used the simplest ply-tube method, which eliminates the need for an access hatch, but which has the disadvantage that alignment of the thrustline must be absolutely spot-on during construction.

Having made or obtained the motor mount and cut out formers F1, F2, and made up floor-pan F3 to suit, the basic fuselage sides are cut out and assembled. Bending the 3/16 square longerons around the tight curves at the nose can be achieved..."

Quote: "Mary, I didn't intend to send this but RMC sort of requested it on 20/10/19 when commenting on the Retro (oz11628). The plan is marked as pre production and does not show any wood sizes. These could be copied from the Retro plan by the same designer and the rest of the plan is sufficient to build from..." 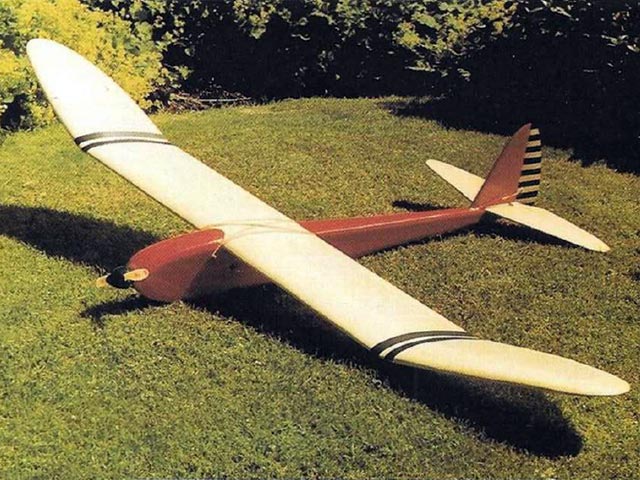