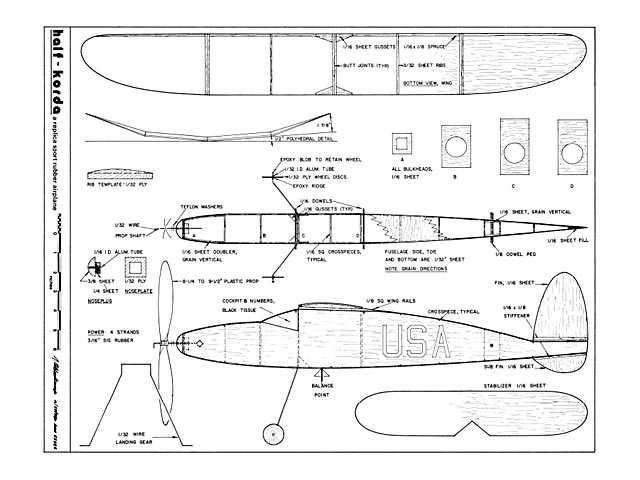 The original Korda Wakefield first appeared in Air Trails Mov 1936, as the Wakefield Winner (oz5395). This here is a later, half size, sport version.

Quote: "All-balsa half-scale model of one of history's most famous machines, will do 30 seconds half wound. Half Korda, by John Oldenkamp.

SCALING DOWN and structuring this model was a genuine treat. I was barely seven years old when Dick Korda blew everyone off the field with his 45-minute-plus flight at the 1938 Wakefield competition, and have wanted ever since to make a duplicate. His design still wins a lot of contests - both as an Old Timer (pre-1941), and under AMA Unlimited Rubber rules. It was also named among the Best Ten Models of the Year in 1973 by the National Free Flight Society (NFFS).

All of this may be in the 'Wow' category, but I can say that our half-size replica flew absolutely perfectly from ROG (rise off ground) the very first time. It's a pleasing model.

Weighing about an ounce and powered by four strands of Sig 3/16 Contest rubber, the ship is capable of slow, right circling, flights of 30 seconds or better, when wound to only half-capacity. (Thirty seconds is an eternity, that's for sure.) So it is an ideal schoolyard and ballpark project. On full winds in thermal proximity, be sure to affix a return address!

Preparations: From the plans and photos, it is obvious that this is going to be a fairly simple and short building task. Carefully select wood that is both light and straight. Wing and tail pieces should be from warp-free A-grain (note grain in pictures) stock. Two 3 x 36 sheets will make these and the various formers, bulk-heads, gussets, etc. The fuselage sides may come out of a single sheet of 1/32 stock, if you don't mind a little patchwork at the rear of one side. It should be fairly firm wood, the swirly quarter-grained stuff being the best choice.

A lot has been written lately about glues and adhesives for model work - which is best for which job, the heaviest, and so on, but how exactly to use each one is seldom covered in any detail. So before we go tear-ing up that beautiful wood, lets get into glueing for a moment: It is my view that strong, light, and neat-appearing models, particularly the kind we are dealing with here, are best assembled with Titebond, or an equivalent aliphatic resin product. But big globs of it running all over the place do very little good. This glue is non-filleting, and develops its true character only when used in relatively thin amounts, two appli-cations being better than one heavy one. The technique is known as double-glueing. It takes a small additional amount of time to do, but saves endless grief later on, if you hit the wall, so to speak.

Do it this way: thin Titebond with a few drops of water, shake it up thoroughly, and repeat, until the stuff looks like evaporated milk in viscosity - not too thick, not too thin. Put a thin coat on all mating surfaces with a brush. Work from a small puddle poured into a saucer or piece of Saran Wrap. Always try to do both sides of the joint, even if you have to wiggle into some tight places at times. Let dry - ten minutes is average for even the dampest days. Now, when you are ready to assemble whatever pieces at hand, apply a second. very thin coat, again, to both sides of the joint, and push them together.

Titebond has excellent 'grab' potential, so you will find that one good side-benefit of double-glueing everything is that many operations can be done in hand, or 'in the air,' and need be held only a few seconds, or with drafting tape, to maintain alignment. This whole procedure is fast, strong, light, and very neat-appearing.

Doing it: Make up patterns for wing, tail group, and fuselage sides by Xeroxing or tracing, and transfer to filing card stock or similar material. Glue the 1/16 by 1/8 in spruce stock to the wing blank leading edge. Flat-sand all material before cutting with successive grades of 220- and 400-grit sandpaper. (A third of a sheet around a 3/8 by 1-1/2 in piece of batten wood works well for this.) Mark outlines and important verticals for wing breaks and bulkheads..." 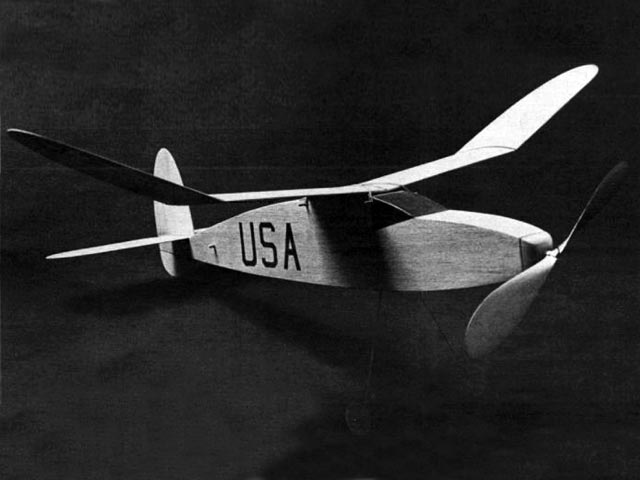