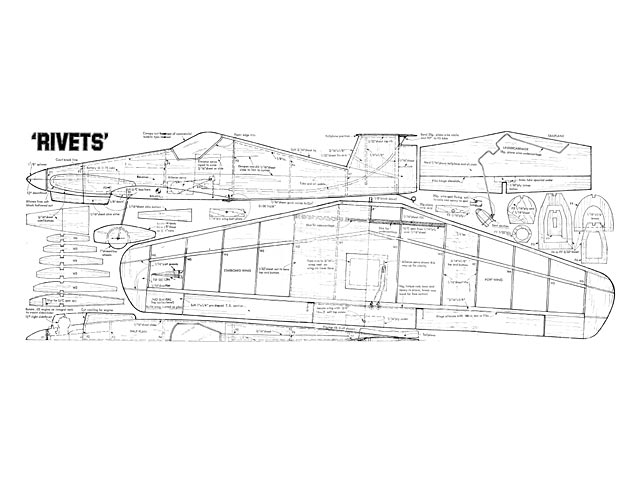 Quote: "Hi, attached is my stitched scan of the 1/4A racer 'Rivets' plan. Published in the May 1984 RCM&E, this was printed on the back of the Matchstick (oz2270) plan which is already on your site. Though a high-res scan the original plan was on that shiny magazine paper, strengthened along the seams in the distant past with sellotape and unevenly faded - hopefully good enough to build from.
Matchstick was an excellent model - I built one in the early 90's - but not Rivets. Still, it completes the duo and may be of interest to others.
I have found an image of the magazine cover on-line (ebay) which shows both models.
All the best,"

Note this is a greyscale file at 150 dpi.

Note the Rivets and Matchstick (oz2270) both appeared in the same article in RCME 1984 titled: "Why not try Suitcase Scale?"

Two Pull-Out Plans: Hopefully having whetted your appetites, take a look at the two full-size plans accom-panying this article. Both designs are suitable for the Cox 'Tee Dee' .020 or G Mark 0.03 motor, both could be considered scale as the 'Matchstick' is an approximately 1/2-size Ugly Stick (oz5175) and the 'Rivets' is fairly close to scale. The 'Matchstick' provides a very good starting point for this style of model, it is boxy, easy to construct and a stable flyer allowing a little practice with such small models before moving on to the undeniably slightly more difficult area of scale models.

Matchstick: Construction of this model is very simple, fuselage sides are cut from 1/16 balsa with diagonal grain 1/32 balsa doublers back to F3. Drill wing dowel holes before assembling fuselage through both sides simultaneously. Cut out formers and assemble F2 and F3 between the fuselage sides then sheet the wing bay area underside of the fuselage. Pull-in the rear fuselage sides and glue together, followed by fitting the nose former 1/8 sq balsa reinforcements. Cut the tailplane and elevator from 3/32 balsa, the fin from 1/16 balsa adding the anti-warp strip to the fin as shown on the plan.

Now complete the fuselage top and bottom sheeting noting grain directions and glue tailplane and fin into place. Fit the scrap 1/16 ply cross-piece onto the fuselage nose and make up the battery hatch.

Servo mounts are hard balsa, the elevator push-rod is simply a length of 18swg piano wire with a 'Z' bend at the servo end and a mini horn, clevis, etc. at the elevator end. If you really trust your wire bending accuracy, the elevator connection can be a simple right angle bend with the push-rod very positively sprung into place.

The wings are equally simple. Cut a plywood template for the ribs and make 18 identical 1/18 balsa ribs. Cut the trailing edge bottom sheet and chamfer as shown on the cross-section. Assemble all the ribs onto the trailing edge, add the top spar and leading edge and the upper trailing edge. Remove from the board and fit the second wing spar. Add the wing tip profiles and triangular gussets, sheet the centre section with 1/32 balsa and cut out the hole for the servo. Note that the servo output shaft projects through the wing upper surface and it is necessary to position the hard balsa servo mounting beams so that the top of the case is against the top sheeting. Sand the complete wing ready for covering.

Covering: We used 'Solarfilm' and cut up the sections to produce the colour scheme and assembled these on my work-bench before applying to the wing. This technique worked well, only a 3/18in. overlap is needed and providing you don't use too much heat when shrinking the covering, these overlaps will hold. Covering this way saves the weight of a double layer of film where trim colours are applied.

Both elevator and ailerons are hinged with 'Solarfilm'. Cut a 3/8 in wide strip and lay the elevator flat down on the wing trailing edge. Film over the aileron and wing trail edge then fold down the aileron into its functioning position and now seal the top surface with a second 3/8 strip. The engine is fitted with 2 x 8 BA nuts and bolts and with 100mA battery Futaba Micro AM receiver and two servos the model weighed 7.5 oz ready to fly and balanced right on the main spar.

Rivets: Using similar sizes of materials and being of a similar physical size, Rivets is once again a remarkably quick and simple aircraft to build. There are some added difficulties, the wing tapers and the fuselage top deck is curved but both these complications are minimised because of the small size of the model and the thin section materials used.

Cut out the full set of fuselage formers and the basic sides using a good firm grade of 1/18 balsa for the sides. Mark the positions of F3 and F4 on the sides and assemble the two formers onto the sides. Now pull in the rear fuselage fitting the fin post and fin former plus F4 at the same time. Cut and fit the stringer down the fuselage top rear deck, noting that it projects over the cockpit opening.

Pin the basic fuselage down over a care-fully marked and drawn centre line and pull in the fuselage sides at the front to fit F2 and F1. You can now add the front upper Ysin.sq. stringer and the upper fuselage sides. Use a medium grade balsa for the curved upper front decking and it should pull round the curve satisfactorily. Sheet the fin and add the leading edge and the 1.5mm ply wing mount plates.

Before sheeting the lower fuselage, fit the elevator control snake tube. Make up the lower cowling duct from 1/16 balsa, carve and fit very soft balsa check cowls then with a razor saw, carefully cut away the engine cowl area so that the engine can be fitted.

Before constructing the wings you will need to make up a pair of torque rods to operate the inset ailerons. Note that the wings are built upside down on the plan. The undercarriage is a plug-in fit and is really only intended for static display. Both servos are mounted on hard balsa rails with plenty of room available for receiver and battery pack.

Final touches before covering include a tail-skid, ply reinforcement for the wing retaining screw on the wing undersurface and a cockpit. This was cut from a streamlined bubble style canopy with the flat front windshield section forming the top, surface of the Rivets canopy. A canopy of around 6-7 in overall length will be needed - try a Micro Mold E-V10.

Flying Small Models: Firstly fix yourself up with some 20% Nitro fuel, a 1.5 volt glow battery (A 1.2AH Ni-Cad cell is fine) and choose a calm day. Fuel up the motor and use either hand-start or the spring starter. Don't use your normal hi-torque 12-volt starter! These small motors nearly always need a prime through the exhaust to set them off.

Set the needle valve with the nose slightly high and be very delicate, open the needle ever so slightly from the optimum 2-stroking setting and check over the controls before launching. Do have someone experienced to launch the model, neither a full-blooded hurl nor faint-hearted drop are going to help!

Once airborne, don't allow the model to get too far away, particularly downwind, far better to continually fly upwind (and out of the sun if possible).

If the engine does go off song from being over-rich then putting the nose up will some-times lean out enough or just as good, cause it to cut!

Once the engine has cut you will find the glide quite fast and landing approach has to be planned and executed smartly. With a little practice you will find that you can land the model at your feet 'deadstick' every time.

Roll rate of these tiny models is usually very fast, but surprisingly they are not usually twitchy. With a wing loading of less than 8oz/sq ft the models are not prone to tip-stalling either.

Next month - What's available in the 'Suitcase Scale' market place." 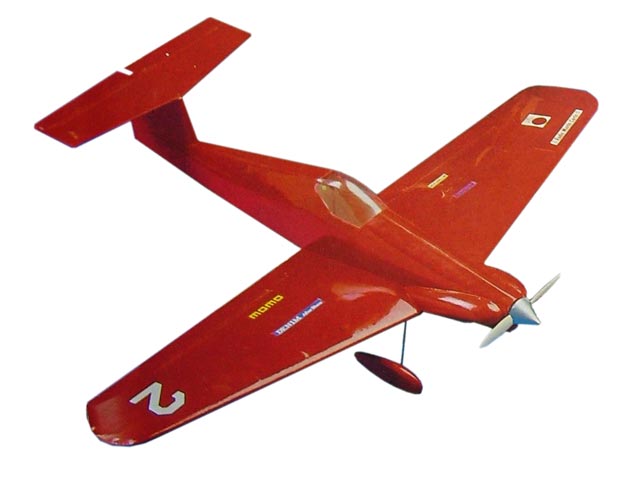