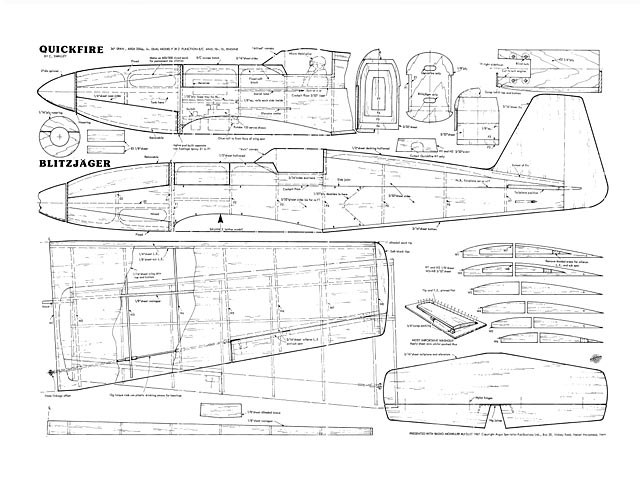 Quote: "Hello Again, attached is my scanned and stitched plan for the interesting combined model Quickfire/BlitzJager, a sort of semi-scale Allied/Axis WWII fighter from August 1987 Radio Modeller. I think Mustfire/BlitzJager might have been more appropriate. No article unfortunately. All the best,"

Quote: "This battling duo, designed by Clive Smalley, are cheap to build and great fun to fly. 36 inch span, for .10 size motors and two-function R/C.

From the experience gained in building several 1/12th scale WW2 fighters over a period of four or five years, the idea emerged to develop a non-scale version for easier building, and to appeal to a wider number of modellers.

Developing this idea a stage further, it became apparent that it would be possible to capture the character of both various Axis and Allied types in the same basic airframe.

To maximise the variety, an `in-line' engine configuration was chosen which also gives the benefit of a cleaner airframe and therefore better gliding characteristics for deadstick landings. Studying the reference books showed that, whilst most of the Axis types had `inverted vee' cylinder engines the Allied types had 'upright vee' cylinders. The design allows for this by making the nose in the form of a 'power egg' which is simply epoxied on to the basic fuselage assembly either upright or inverted to suit the type! Similarly with cockpit canopies, most Axis types were flat-topped as the Me Bf 109 whilst Allied types were typified by the blown canopy such as on Spitfires and P-51B Mustangs fitted with the Malcolm hood.

The great benefit of going to a non-scale model, apart from the simplicity, is that virtually any WWII colour scheme can be adopted. This is an opportunity for those interested in doing a 'different' paint scheme to really have a ball. The types of suitable schemes are worth listing just to catch the imagination:

Note: US Navy is unsuitable as all these aircraft were powered with radial engines and therefore are not 'in character'.

Note: Navy scheme unsuitable as for US Navy

These sixteen represent just a few of the possibilities! There are many others and a look through some of the general WWII fighter reference books will, no doubt, give other ideas. For example: Australian, Rumanian, Swiss, etc.

To help keep 'in character' it is useful to think about the canopies. For instance, for the Russian schemes, although technically an Allied subject with the 'Quickfire' nose, it would be better to use the Axis canopy to represent such types as the MiG 3 or LaGG-1. Don't be too hide-bound by the nose/canopy situation; use the most suitable combination for the colour scheme needs. Similarly, it would be possible to 'round-off the tail surface tips and, indeed, the wing tips as well. In the latter case it may be better to shorten the wing panels by leaving off the end rib bay and replacing with soft sheet to enable a rounded tip to be carved to shape. Use your imagination. The models and plans only represent a basic form and provided the control surfaces and movements, rigging angles, CG, etc are not messed about with, anything goes. Even use a 'bubble' canopy with a cut down rear decking if you wish! The name of the game is fun!

Construction: Little need be said here for the design is just about as simple as possible. The main point to watch is the vital wing washout. It MUST be built-in and take care to get each wing panel identical..." 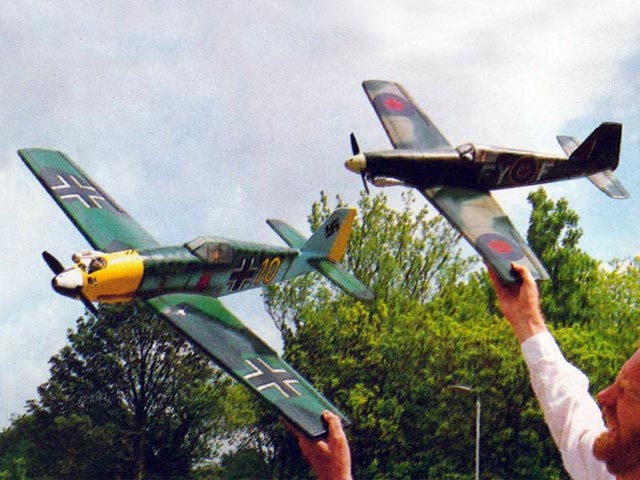