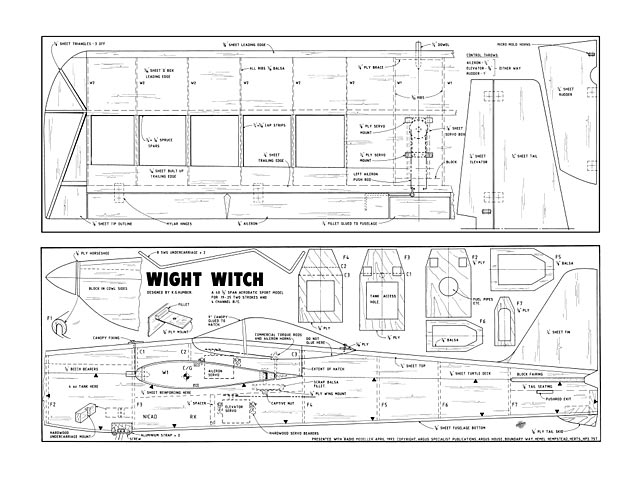 Quote: "Wight Witch. Right! Dust off that 25 and let this little aerobat from Keith Humber put its spell on you.

Wight Witch was designed with a view to produce a small sport acrobatic model which was forgiving and fun to fly but with a good aerobatic performance on a 25 or 19 two-stroke. As some of the smaller models can be a bit of a handful to fly (particularly slowly) I have used a self-designed thick aerofoil section reflexed for the last 20% or so enabling a 3/8 in sheet full length aileron to be used (with torque rod horns). This gives plenty of control and lift.

The slow speed handling should hold no fears; it's quite as good as much larger machines and the high speed performance is really quite enchanting, hence the name Wight Witch! This model will really put a spell on you. She is capable of all the normal manoeuvres and some of the not-so-normal - like inverted flicks at the top of a climbing roll with the model tumbling head over heels before dropping into an inverted spin, pulling out with ease 30 ft from the deck - I hope (absolutely magic.)

Build: So on with a brief description of the construction, starting with the fuselage which is a 1/8 sheet basic construction. Cut two basic fuselage sides from 1/8 medium sheet (there are no ply doublers used - this seems quite all right and is adequately strong in practice). Cut F2, F3, F4, F7 from 1/8 ply, the rest of the formers are 1/8 balsa. Glue up the engine bearer assembly using epoxy or similar adhesive on the basic fuselage sides to the engine bearers and F2 and F3. Pull in rear fuselage sides and epoxy making sure that all is straight and true.

Make the hardwood undercarriage mounts and blocks and epoxy into position. Sheet the bottom of the fuselage with 1/8 sheet and make up tail and fin from 1/4 in sheet. Glue into position on fuselage.

Cut and fix the 1/4 in top decking followed by top side sheeting including the wing fairing (which is cut out after shaping and sanding the fuselage). The engine is mounted into position and the cowling is blocked in around the same leaving the bottom open for engine access.

Wings: The wing is framed up on 1/4 x 1/8 in spruce spars with 1/8 ribs. One 36 in length is the basic wing with the tips added on giving a span of 40 in. The ailerons are 3/8 sheet carved with a razor plane to section, with mylar tape hinges. There is no dihedral; the wing is built flat on the board packing up the trailing edge, sheeting the leading and trailing edges plus capping, all before removing from the building board. Plane the LE 3/8 in to section and complete the wingtip with 1/8 sheet outlines with triangular fan ribbing to form the tip. That is pretty well all the basic constructions. My own model is covered in 'tex with Humbrol enamel trimming and fuel-proofed with Tufcote. On the prototype the white is natural Solartex hence the fuel proofer. Keeps it nice and clean. The control surfaces are hinged with mylar tape after covering.

There is a small fixed fairing on the fuselage which protects the aileron torque rods. The cockpit canopy is a 9 inch commercial bubble fixed to the removable wing fairing and retained with a small screw at the rear and a turn-button at the front, made from the flat bearing plate used with Micro Mold horns.

The engine used is a 25 which is plenty powerful enough - a 19 would be quite adequate. Flying-wise she has no vices though she can move along pretty quickly when on full throttle. Finally I would mention my own model used an ounce or so of lead at the tail so if you are using a heavyish engine try to shorten the nose/tank bay by about a 1/2 in or so. It won't hurt and could help by not needing any tail weight. Don't take the CG any further back than shown and really enjoy flying this little aerobat. It is fun and looks better than the fun fliers. Well, it does to me anyway!

Quote: "Hi Mary and Steve, I've attached the plans and article for another of Keith Humber's designs that I hope will be of interest to OZ. It was published in April 1993 Radio Modeller as an aerobatic sport design with 40 inch wingspan for 0.19 - 0.25 two stroke engines. The plan states a wingspan of 40 and a half inches. My copy of the plan (and this scan) provided a calculated figure of about 40 and a quarter inches, so, on average, this scan is about right... I think that the scans are good but normal OZ 'check the plan' warnings should apply. Thanks, again, for your great website. Best wishes," 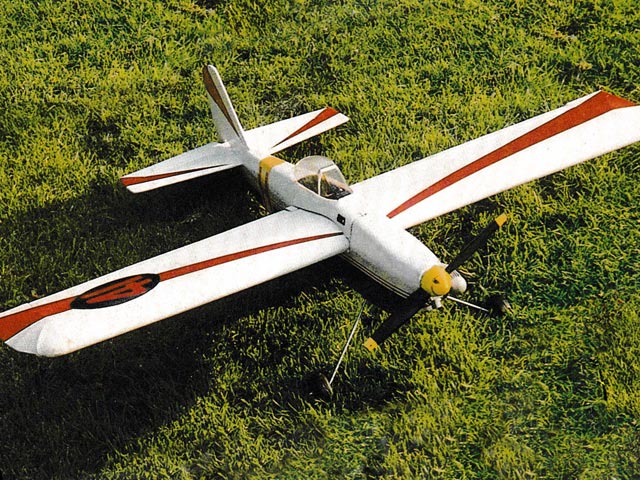