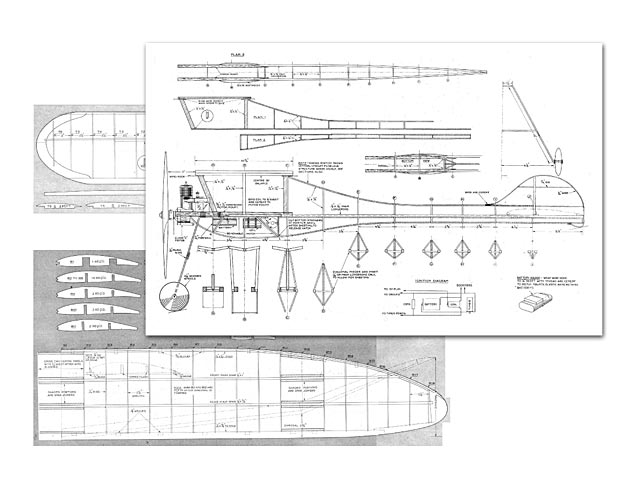 Note this is not a full size plan. This is a scan of the magazine pages as printed, in 1943.

Quote: "HIGH-PERFORMANCE contest planes are distinctly not designed. Instead, they develop over a long, grueling period. In that time the bugs are ironed out, the essentials are improved and the nonessential items are trimmed away.

Out in California, where the Westerner was evolved, competition was, and still is, really tough. Modelers were able to fly and test ships from sunup to sundown. They constantly sought out the hottest motors, and every contest was a knock-down-and drag-out affair from start to finish.

Prior to 1941 the author was engaged in developing the ship that ultimately proved to be the Westerner. When the contest season started that year, we fondly hoped that the bugs had been eliminated. The ship that evolved was heavy, weighing over twelve ounces per square foot, but it would take the hottest motor available without spin or other disastrous result. Besides, it was rugged almost to a fault, and would glide with the best of them once it got up there. And get up there it did, with almost any motor.

After much testing the Westerner launched the 1941 campaign and from start to finish of that season it made modeling history. During the period the author, flying the Westerner, won an OK Special, an Ohlsson 60, Ohlsson 23, Thermite 60, Thermite 43, Thermite 36, Dynamite, Micro 19, two awards of $50 cash, other cash awards of $12.50, and nine different trophies. It won the San Francisco Bay area trophy three times and the East Bay Aeroneers trophy eleven times, retiring both of them.

The prizes mentioned were all for first places and in the contests entered the winner of first had a choice between trophy and motor. The ship took twenty first places. In addition to other awards, the Westerner took home enough model supplies to stock a hobby establishment.

On the day the Westerner set the AMA record for Class C ROG Open, the weather was ideal for flying, with no wind and plenty of thermals. The meet was held at Sacramento, Calif in the fall of 1941. The currents were not enough to put a ship out of sight, but as soon as one quit there seemed to he another handy. After three flights the Westerner was found to have averaged 24:37.8. Second-place winner averaged 14:40.6 - so you can see the difference in performance.

Manuel Andrade, the author's flying pardner at the contest, watched the ship for the first flight, chasing it out several miles. At that point the ship hooked a ground thermal and began to ride up almost out of sight, then down to within 100 feet of the ground, and back up, et cetera. Manuel fell asleep alongside the road and was awakened by a motorist who thought he must have been hit by a car. After more than an hour the ship came in to a perfect landing. The writer chased the ship on the second flight and had much the same experience. We had lunch, watching the ship in the meantime, and recovered it after it had flown - to our knowledge - over two hours.

More incidents about the Westerner could be written and all would be interesting to modelers. The ship was put out in kit form for a short period, but wartime restrictions caused it to be withdrawn from the market. Buddy Romak, whose entire family fly Westerners, holds the Class B ROW record - with a scaled-down version - and held the Class A ROW record for some time until it was recently broken. The original ship holds the Class C ROW AMA Open record with an average of 2:48.4, the highest ROW record listed.

Many fliers who had never won a contest in their lives immediately became top-notch fliers upon completion of their first Westerner, and few of the modelers have switched to other types after flying one for a time. The ship has been scaled clown to fit smaller motors, with equal success.

It is hardly possible to overpraise such a ship. Build one and you'll see why the Westerner is tops among Class C contest ships.

CONSTRUCTION: Your first impression may be that the Westerner is ungainly. However, each part has been carefully designed to give the utmost in performance combined with the greatest strength. The entire fuselage is sheet-covered with 1/16 sheet. The motor mounts are of rock-hard maple or similar wood. All wood used is hard and construction is rugged throughout.

The wings are of especial interest because of the sweepback. Inasmuch as tips on model wings stall first, sweepback in them eliminates this fault to some extent and improves the stability. The tail surfaces are cemented to the body. This makes transportation a problem, but eliminates possibility of changing adjustment and tail members falling from the plane when a hot climb is under way. Build the plane as directed, It may weigh a bit more than you planned, but it will take the hottest Class C motor on the field and turn in a record performance.

There are several other innovations in the Westerner. The fuselage is entirely covered with 1/16 sheet balsa and this covering plays an important part in furnishing additional strength. The fuselage framework is of 1/8 square (hard) in all but a few places.

It will be necessary to make up your own set of plans from the drawings. All dimensions are given, and although the full-size plans will require some effort, you can easily do the job in an evening, using nothing but a convenient drawing board or table top, a ruler and a pencil. Concentrate on plans for the fuselage first, for that portion of the ship should logically be the initial step.

The top view of the fuselage (Plan 3) should be drawn out on a large strip of paper. Begin your building by selecting two pieces of 3 ft hard balsa 1/4 in square for the longerons. The motor mounts are of rock maple, although any hardwood will do, such as gumwood, oak, ash, or even spruce..." 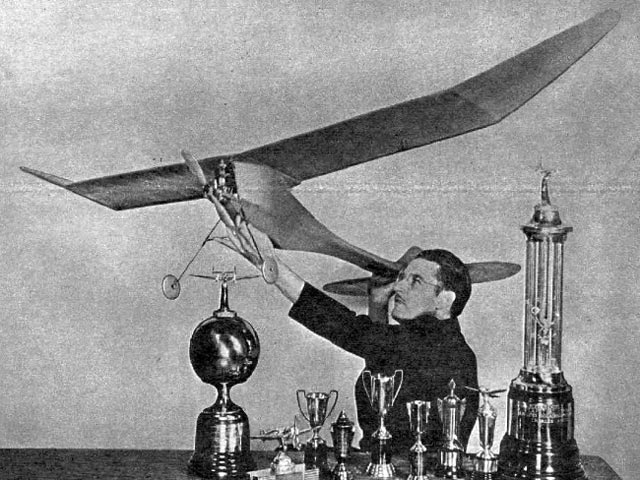